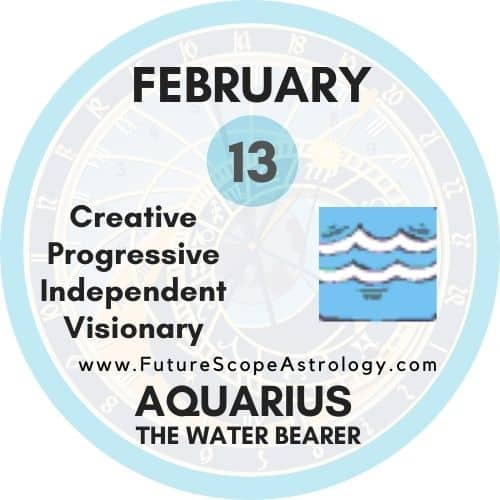 Is your Birthday on February 13 ? Know the Sun Sign, Personality, Compatibility and more….

For People born on February 13 , the Zodiac sign is Aquarius.

On this day, people are born with a stubborn, unbalanced character. The vibrations of the day are such that a person born today has to fulfill karmic debts. Much will depend in his life on how he will relate to people, on his character and actions.

If a person born on this day goes the path of degradation, not wanting to develop his soul, then this will be a cunning, hypocritical, quirky person, capable of betraying, humiliating anyone. And they will treat him like that.

The life of such a person is hard. Only hard work on oneself, cardinal changes in character and way of thinking can create opportunities for favorable conditions. By changing himself and his thoughts, a person will change his life.

Born 13 February – energetic natures, accustomed to act according to their internal incentives, often changing the decisions made earlier for no apparent reason. They create amazing events around them and enjoy being at the epicenter of these events.

Perhaps born on this day can be considered as people living wide open. Those who do not seek the recognition of the general public may require increased attention from the family and the social circle to which they belong.

Born 13 February usually love to show their emotions, flaunt their feelings – be it joy or sadness. Unusually vivid personalities, they find it difficult enough for themselves to keep their designs secret for a long time.

Unfortunately, excessive truthfulness gives them a lot of problems, especially if the question is about love. Born 13 February usually believe that everything will be formed. Perhaps that is why they rarely worry about the failures inevitable in our lives. “Whatever is done is all for the better,” is the motto of these people.

Their rational basis, as a rule, is well developed, and they are undeniably smart, but sometimes it seems that those born on this day do not use their heads at all. The only thing that guides them is their body and heart. Thus, it is quite difficult to contact them, because their actions are unpredictable, and actions sometimes surprise with extravagance.

At the same time, the developed emotional sphere and the ability to think unconventionally makes communication with them extremely interesting. Most of them born on 13 February are open and friendly towards others. However, less enlightened individuals.

As a rule, born on February 13 they try to cultivate gentleness in themselves, which sometimes, however, turns into excessive coldness. Nevertheless, it is better for those born on this day not to conduct risky experiments with the aim of changing their own character.

Attempts to limit their spontaneity usually end in complete collapse, as these people are simply not able to fulfill all the requirements that others make on them. It is enough for them to remember that demonstrating their feelings may be appropriate, but not in all situations. Very often, moderate abstinence will bring much more benefit to them.

Born 13 February should be constantly in the spotlight. Attention for them is like doping, allowing you to set records. If they want to be alone, then they need it for personal development. However, those born on this day often make the mistake of accepting arousal as a fundamental emotional characteristic.

They can be convinced in many ways that is not true. And as a rule, they tend to trust people. It is clear that those born on February 13 want a lot, and, as a rule, they manage to achieve this. But often they show impatience or intolerance when something does not work out as they would like.

But often they show impatience or intolerance when something does not work out as they would like. Such people should be more objective about their own desires and ways to realize them.

People with February 13 Birthday have Aquarius Sun Sign. Click here to check the compatibility of Aquarius with various other Zodiac Signs.

Amethyst is the birthstone for those born on 13 February.

Born 13 February jealous of their health. Especially often, the musculoskeletal system becomes the main concern of these people.

That is why they definitely need to do yoga, meditation, tai chi. Born 13 February must strictly follow a diet, but, as a rule, their food is very extravagant. It is advisable for them to exclude sugar and stimulants, butter, fats, and red meat from the diet.

Advice for People Born on February 13

Analyze your life path. Try to understand the feelings and points of view of other people. Cultivate self-control and willpower. Naturalness is a wonderful thing, but it should not overwhelm the rules of behavior in society.