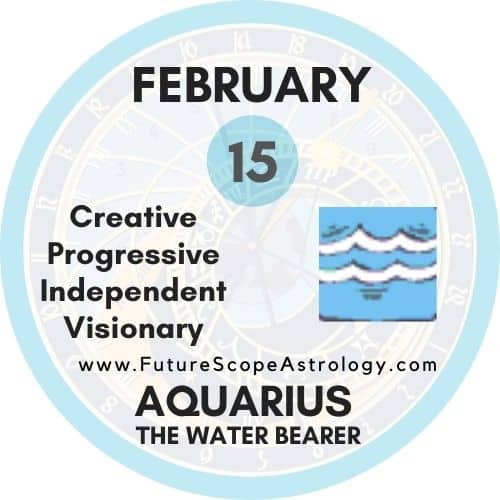 Is your Birthday on February 15 ? Know the Sun Sign, Personality, Compatibility and more….

For People born on February 15 , the Zodiac sign is Aquarius.

On this day, people are born who build their fate with their choice. Which way will they go? Bearing goodness and joy? Then their life will be calm, they will be able to create favorable conditions for themselves. If negative thoughts take hold of them and they sow grief and misfortune, then they will plunge themselves into the abyss of evil and suffering, their life will be joyless, continuous problems and enemies.

They do not refuse what is important and expensive for them, they are able to quickly adapt to new conditions. They will come out of any situation with honor. But they have moments of uncertainty, dissatisfaction, when they feel disappointed, and this sometimes interferes with them. In tender matters there will be ups and downs, they need to learn to manage finances wisely, then they can become wealthy and create comfortable conditions for themselves.

Born 15 February have a well-developed imagination. Wherever their talents are directed – into technical or, conversely, poetic realities – they always achieve amazing results. Perhaps the success of these people is explained by the fact that it seems completely natural for them to think creatively. Even less enlightened individuals born on this day brilliantly cope with extremely complex tasks, in the opinion of those around them. In addition, those born on this day are incredibly positive in their attitude to reality.

And yet the world is structured so that the ups and downs in the life of any person are repeated almost with the same frequency. Many resign themselves to temporary setbacks, knowing that they will certainly be followed by new victories, but those born on February 15, unfortunately, do not know how to lose. If their attempts to do something turn out to be unsuccessful, they, as a rule, experience great disappointment, which can unsettle them for a long time.

Very sensitive to the outside world, those born on this day are always sensitive to criticism directed at them. We can say that the feelings of these people openly lie on the surface, so they are easy enough to injure or provoke difficult to explain actions. Born 15 February they love that everything around them develops very well.

This applies not only to their own affairs, but also to the affairs of those who are truly dear to them. People of this day are full of sympathy and sympathy for others. Often they support the weakest, not considering it difficult for themselves to take a feasible part in their fate. Most of them easily lend, easily spend money and also easily earn it again.

At the same time, those born on February 15 are unlikely to tolerate having fun of them. They are very serious when it comes to the principles or ideals that determine their life. Lovers by nature born on February 15 prefer complete freedom in interpersonal relationships, not without reason believing that if they want, they can play all the instruments of this world. Many of those born on this day are incredibly inquisitive and want to explore everything around.

They can endlessly encourage themselves with all kinds of incentives and, in doing so, make life much richer. However, they should avoid excessive exercise in the emotional sphere, because of this they can shorten their life or get a nervous breakdown. Although born on February 15, they are quite good at self-discipline and able to control their emotions, they should be wary of the chaos that usually happens if they allow themselves to relax and become completely uncontrollable.

Nevertheless, their minds are sufficiently developed to understand that order is a guarantee of prosperity for them, since it allows you to strictly follow the rules, which greatly facilitate interaction with the outside world. Unfortunately, some of these people sometimes forget about it.

Often doubting the correctness of certain undertakings, those born on February 15 prefer to remain silent and behave as if nothing had happened. Such behavior, however, causes bewilderment in their environment, since silence is usually interpreted by everyone in their own way. Least Developed Persons those born on this day should avoid feelings of self-pity or periodic outbursts of uncontrolled anger, since being closely associated with negative emotions, those born on February 15 can create their own troubles.

Very often, those born on this day with age acquire wisdom worthy of respect. Over time, the ability to control their emotions comes to them. However, the ability to rapidly manifest feelings is perhaps one of the strongest positive features of these people. By giving and receiving, they perfect and develop their potential.

Nevertheless, they have a danger of being overwhelmed by introspection and plunging into their own world, full of illusions and dreams. Born 15 february

They can create troubles for themselves. Very often, those born on this day with age acquire wisdom worthy of respect. Over time, the ability to control their emotions comes to them. However, the ability to rapidly manifest feelings is perhaps one of the strongest positive features of these people. By giving and receiving, they perfect and develop their potential.

People with February 15 Birthday have Aquarius Sun Sign. Click here to check the compatibility of Aquarius with various other Zodiac Signs.

Amethyst is the birthstone for those born on 15 February.

Born 15 February extremely sensitive to their surroundings, so they often have allergic reactions to foreign bodies. Their skin usually suffers severely from temperature changes, so even men are advised to use creams containing vitamin E or olive oil.

Those born on this day often encounter problems of the nervous system that arise from an extremely developed emotional sphere. Born 15 February often experience all the “charms” of inactivity, which physical exercises that do not require special skills will help them get rid of.

People of this day are very picky about what they eat. For this reason, it is quite difficult for them to choose the most suitable diet. Born 15 February they love to cook and cultivate food – that’s why their table should be varied.

Advice for People Born on February 15

Staying constantly in a good mood is a very real thing. Avoid overstressing your sensitivity. Form a patience and ability to concentrate in yourself.

Learn to hold in your hands your bad moods and disappointments. Direct your energy in a smooth positive direction. Do not allow yourself to succumb to other people’s influences.