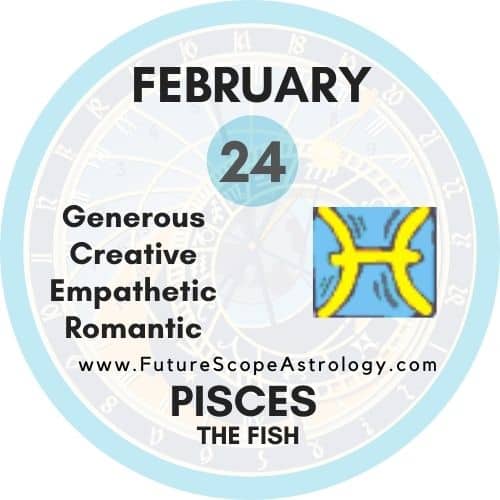 Is your Birthday on February 24 ? Know the Sun Sign, Personality, Compatibility and more….

For People born on February 24, the Zodiac sign is Pisces.

People born on February 24 are ambitious, persistent, energetic, independent and purposeful. The vibrations of the day are such that they enhance the pronounced properties of a person’s nature. It depends on a person what qualities of his character he will develop.

People born on 24 February always achieve their goal, firmly following the intended goal. They will be accompanied by luck in their careers, in the financial sphere. In family life, such people usually have everything fine, they can smooth out conflict situations, avoiding critical moments.

They have many friends, but also many enemies. They can be especially successful in music and literature.

becoming a victim is the main theme of people born on February 24th. Their willingness to sacrifice is manifested in various ways. They often sacrifice their interests for the sake of some business, the public good or the ordinary wishes of friends and family.

Usually they themselves require large sacrifices from others, especially from loved ones. However, the topic of sacrifice can sometimes be repeated in a more abstract, philosophical theme, where the sacrifice is the acceptance of life as it is, the so-called sacrifice of one’s own egoism.

Then, at best, those born on February 24 are selfless and work exclusively for the benefit of others. Some of those who have chosen the far from easy path of self-sacrifice for the sake of high ideals and interests of society do it with great pleasure; others with reluctance, considering it their duty.

In the first case, those born on February 24 sincerely believe in what do they do; the happiness and well-being of others is the highest reward for them.

Others, instinctively sensing that others do not always readily accept the fact that they did some sacrifices, can be very upset because their efforts, were not appreciated.

Thus, those born on February 24 either suppress the feeling of egoism or completely get rid of it. The danger here lies in the fact that they can deceive themselves: it is impossible to get rid of egoism, if it has not yet fully formed.

The most developed people born on February 24 understand this and try to objectively evaluate their efforts, while the rest blindly obey fate and though they may feel like being taken advantage of. Born 24 February must choose the path of service to society, while not completely abandoning their own desires.

For people born on this day, it is important to be more confident in their ideals and not be afraid to talk about them.

If those born on February 24 grew up in far from ideal conditions or the lifestyle of these people does not match their true talents, they tend to negatively determine their future. If one day they still want to take control of their lives, they will most likely find that they are becoming fierce, since they will have to contradict their habits.

Willpower, determination, certainty, courage – these are the character traits that people born on February 24 must acquire before they sacrifice themselves for someone or something.

People with February 24 Birthday have Pisces Sun Sign. Click here to check the compatibility of Pisces with various other Zodiac Signs.

Amethyst is the birthstone for those born on 24 February.

In people born on February 24, there is often a tendency to excessive relaxation and inaction. Therefore, they should especially beware of a sedentary lifestyle, since in this case the lymphatic and circulatory systems are at risk.

For some people born on February 24, loving relationships become the center of the universe, so they should be aware of the possible dependence on this feeling, the so-called “love addiction.”

Enjoyment of food and physical pleasure are integral components of their happiness. However, they would not be hindered by a strict diet and putting their emotional life in order.

Advice for People Born on February 24

Learn to stick to reality. Do not refuse so easily from the suggestions and wishes of others. Develop your talents and willpower. Resist the temptation to abandon your ego.