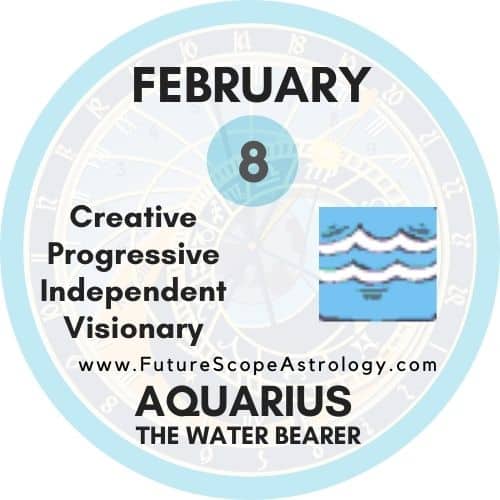 Is your Birthday on February 8 ? Know the Sun Sign, Personality, Compatibility and more….

For People born on February 8 , the Zodiac sign is Aquarius.

On this day, good-natured, strong-willed people are born. They are merciful, help will always come, they do not need to be asked for it. They will provide support disinterestedly, not expecting awards and gratitude. They usually have many friends, people are drawn to them, feeling the strength in them, next to them is cozy and calm.

Their sacrifice can play a bad joke with them: to draw tragic events into their lives. When doing good, doing good, they need to learn to act without prejudice to themselves, considering all their steps. It is so necessary for them to be more reasonable in spending, to save the acquired capital, then they will be able to ensure a prosperous life in adulthood. Otherwise, they risk living out their days in poverty.

Born 8 February are endowed with great telepathic abilities and have the ability to predict events. Sometimes they can purely theoretically assume how they will control the situation and put their ideas into practice – but not through physical efforts, but by the power of suggestion, which gives shape to their desires and directs them in the right direction.

In addition, they have the ability to anticipate events and, accordingly, calculate the most suitable time for a promising project or successful career advancement.

In financial matters, those born on February 8 are able to choose the right moment for investment, as well as to establish or terminate business relations.

One can hardly resist the temptation, not to say that those born on February 8 know how to see the future. Perhaps this is not the whole point, and in their ability to feel ambiguity in relationships between people.

However, among those born on February 8, there are actually clairvoyants who read the thoughts of others and can transmit their own. But even the most ordinary individuals have a pronounced sixth sense. Born 8 February strictly adhere to their ideas about the future.

Before starting to achieve the goal by trial and error, they will step aside, objectively consider the situation from all sides and imagine how everything should happen. Often it seems that they live in a different world, a world of ideas.

They may be intellectuals or economists, architects or cartographers, musicians, scientists or programmers, but the only thing they are not is lazy dreamers. People are surprised by this fact, mistakenly believing that those born on February 8 are naïve people. In fact, they can lead projects related to sophisticated technology, without making a single mistake.

Despite the talents, the emotional life of those born on February 8 may sometimes be unstable. If they fail to discover their natural inclinations and channel their energy towards improving personal relationships, they will, unfortunately, be doomed to loneliness, but this condition is unbearable for them.

Often, those born on this day are deeply mistaken in taking responsibility that they cannot afford.

Many of them are prone to compromises, and this not only finds a positive response from others, but also allows those born on February 8 to surround themselves with general attention. Unfortunately, their telepathic abilities do not help them in choosing close people.

Often they require that problems be resolved easily and quickly, but not with all this passes. It is necessary to come to such relations, which would be based on mutual concessions, and support them.

People with February 8 Birthday have Aquarius Sun Sign. Click here to check the compatibility of Aquarius with various other Zodiac Signs.

Amethyst is the birthstone for those born on 8 February.

Born 8 February often suffer from hidden diseases that they do not want to discuss. If possible, they should be checked regularly by a family doctor, especially if he knows how to keep other people’s secrets and never fails his patients.

Born 8 February should pay attention to the lymphatic, immune and vascular systems. In old age, many of them face varicose veins. Born on this day should adhere to a sparing diet, reduce or minimize smoking and alcohol consumption.

A moderate load is recommended and, most importantly, more rest. Beware of not only uttering, but even thinking of prophecies for yourself, as you have strong destructive energy.

Advice for People Born on February 8

Be more realistic. Develop intuition. Do your work in spite of any problems. Not everything is easy. Avoid self-destruction tendencies.