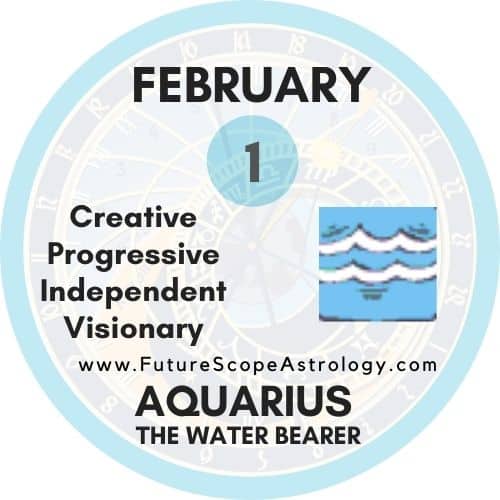 Is your Birthday on February 1 ? Know the Sun Sign, Personality, Compatibility and more….

For People born on February 1 , the Zodiac sign is Aquarius.

On this day energetic, talented, resolute natures are born, endowed with great intuition, a special gift to see and appreciate the beautiful in this world, in the people around them. They are self-confident, stubborn, ambitious, always have their own opinion.

They are fair, they try to help those who need support, and often at the expense of the interests of other people, which causes various conflicts. They lack tact, in their statements they are harsh; this leads to the fact that people shun them.

Those born on this day have many ill-wishers, and if they do not change their character, become soft and friendly, they will have to spend their whole lives in upholding their rights, in the struggle.

Born 1 february are not distinguished by delicacy, but, despite this, they are harmoniously developed. Dissatisfied with abstract solutions, they shock others with their ideas. Persistent, strong-willed and self-confident, these people know when they are right and will not step back an inch.

They are mentally prepared for various circumstances and have an intuition that allows them to circumvent any issues that are undesirable for discussion.

Thus, despite their scandalous nature, they manage to maintain friendly relations with others. Persons born on February 1 are energetic and youthful, but often impatient, like children.

For those born on February 1, emotional problems can be a disaster, especially in adolescence. Their feelings are scattered in different directions, impulsive and uncontrollable, which repeatedly brings these people down.

There is a big difference between their mental stamina and emotional vulnerability, and at times it seems that you are facing two different people. Until they make every effort to master the internal processes and prevail over personal disorder, at least in order to begin to understand themselves, their life will go in turmoil.

The most enlightened natures born on this day ultimately channel their versatile talents into a constructive direction, but this takes time. Oddly enough, those born on February 1 are sometimes so indecisive that they cannot stand up for themselves even where they expect it from them.

Others, observing them from the side, sometimes in bewilderment ask themselves why these people have not reached heights, despite their ambition. In addition to the state of mind, the sensual side of births on February 1 requires support and can cause additional problems if it gets out of control.

The personal hierarchy of these people is formed from the above qualities: preference is given to soulfulness, then feelings come and emotions come in third place. Unfortunately, those born on February 1 too often neglect intuition.

However, it should be developed and it is especially necessary to rely on it, since intuition is able to strengthen disparate ties and unite talented but stormy features into a single person. Often the problem is that the power of reason and logic, very developed in those born on February 1, are able to supplant intuition.

When the mind is upset at times, these people tend to plunge into the element of feelings and physical sensations, often resulting from emotional outbursts and habits do not deny yourself anything. For people born February 1, self-mastery is less important than understanding what they want.

When solving complex cases, they take into account the human factor, which is their highest goal. These actions affect their progress – to where humanity, understanding of the state of mind are the main criteria.

People with February 1 Birthday have Aquarius Sun Sign. Click here to check the compatibility of Aquarius with various other Zodiac Signs.

Amethyst is the birthstone for those born on 1 February.

People born on February 1, as a rule, experience many problems due to their increased excitability. Strong emotions put them in a difficult position, from which it is difficult, if not impossible, to get out.

Smart and bright personalities born on February 1 should be afraid of the temptation to use any means of disconnecting from reality. Moderates are very useful, but – what is important! – regular physical activity (aerobics, jogging, swimming).

In terms of diet, excessive consumption of sugar and tobacco should be avoided, which, although it soothes for a while, but ultimately makes people more excitable. Cereals, fresh vegetables, bread, good soups and stews (without sauce) are perhaps the most preferred way to stay healthy for those born February 1.

Advice for People Born on February 1

Develop intuition is a natural gift. Try to be more patient and contemplative. Do not worry about lovers. Be your own boss.