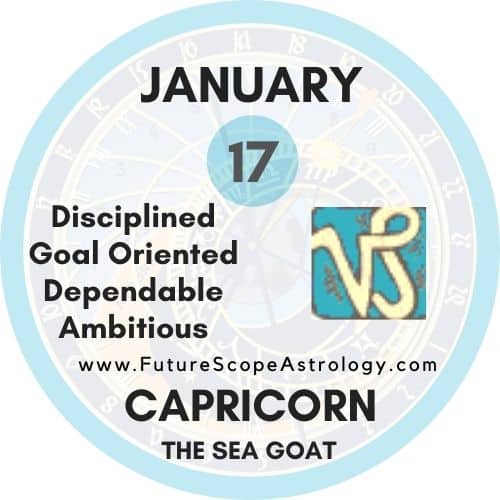 Is your Birthday on January 17 ? Know the Sun Sign, Personality, Compatibility and more….

For People born on January 17, the Zodiac sign is Capricorn. Capricorn is an earth sign. Capricorns are hard working and have good patience. They can be stubborn at times.

Traits of a person born on January 17

The vibrations of this day are such that enhance all the properties of nature. By nature, these people are optimists, confident in themselves and their abilities. They can only achieve success in a team.

Having reliable partners, acting with them in the community, acting with respect to others, they can work miracles, but individual activity usually does not bring such results, in this case you will have to achieve it with your own work, you should not hope for support and understanding of others.

Wealth and recognition can only be achieved through kindness and generosity; if they are stingy, dishonest, they will eventually lose everything that they have gained over many years and, watching how everything collapses, they will not be able to change anything, because they were born in order to bring good, joy to this world.

Born 17 January, perhaps, it is difficult to refuse purposefulness. This is largely due to the fact that they always clearly determine for themselves the goal and know what needs to be done at any given moment in life.

They also have the ability to soberly assess their chances of success, based on past experience and the ability to pre-evaluate the difficulties that may arise in the future. In the early years of life, those born on January 17 are well aware of what an incentive is.

They understand its importance, they know that it can move people to action and often even determine how they will behave in a particular situation (incentives, of course, are based on basic human emotions – love, hatred, fear, shame – in general, everything by old man Freud).

Those born on this day are assimilated almost from the diapers, that a person is simply obliged to control his actions and that the basis of any success is in iron self-discipline.

The most enlightened personalities of this day always coordinate their actions with their own desires and needs, thereby inspiring themselves to great achievements. Less developed individuals try to place more emphasis on controlling the world around them. Sometimes they become unsurpassed masters of manipulation.

Born 17 January with their physical presence they can dominate in any situation. Since, as already noted, their goal is always clearly defined and they have amazing self-control, others may experience some awkwardness while communicating with them.

Born on this day there is no need to ask permission to be what they want to be. They boldly reject all conventions and restrictions, interfering with their self-expression.

Born 17 January generally advocates of individuality and are in the front ranks of the fighters for the rights of the individual. Thus, they rarely play well in a team, they are much better at a job that requires individuality.

It is not surprising that the biggest problem for those born on January 17 is often the loss of contact with the feelings, moods and philosophy of other people.

Being not inclined to compromises, they often cause antagonism from their colleagues, friends and relatives. In the same way, they suppress less powerful personalities who fail to equal them in intellect or organization.

That is why it is vitally important for those born on January 17 to strengthen their social position and strengthen friendships and family ties.

Those born on 17 January are difficult to conquer in love because they are very shy and hesitant in love, despite always appearing strong and decisive. They might seem cold , and not very interested in love, but in reality, even if they are not lovey dovey, they have great feelings.

People with January 17 Birthday have Capricorn Sun Sign. Click here to check the compatibility of Capricorn with various other Zodiac Signs.

Born 17 January should, on the one hand, control their aggressiveness, and on the other, do not overwhelm them too much by driving them in. If they manage to combine a smooth release of energy with awareness of the effect that it can produce on others, peace of mind is guaranteed.

Consumption of various stimulant foods such as coffee, nicotine, sugar, light antidepressants should be carefully monitored. Diet should be balanced, spicy foods should be consumed separately, emphasis on cereals is encouraged.

Overeating meat is completely useless. An excellent tool to neutralize aggression is active exercise. Adversarial sports, fencing, swimming, running are especially useful, although care should be taken not to overload your muscles.

Advice for People Born on January 17

Give others a chance. Weakening self-control will somewhat free you. Cultivate patience and keep up with the times.

Those born on January 17th share birthday with there famous people:

Garnet is the birthstone for those born on 17 January.

Garnet, the birthstone for January 17, has been used for centuries in jewelry and other decorative items. While many people know about the gemstone’s beauty, they may not be aware of the other benefits that garnet provides.