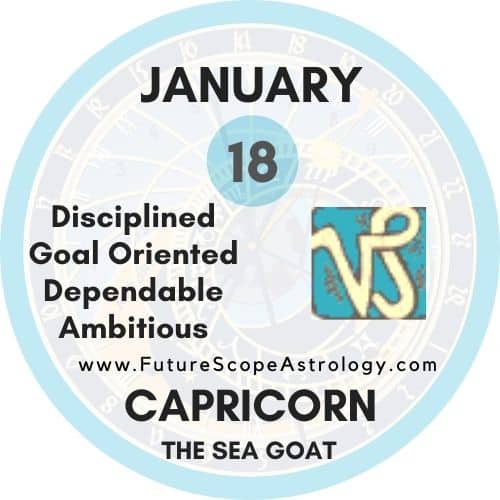 Is your Birthday on January 18 ? Know the Sun Sign, Personality, Compatibility and more….

For People born on January 18, the Zodiac sign is Capricorn. Capricorn is an earth sign. Capricorns are hard working and have good patience. They can be stubborn at times.

Traits of a person born on January 18

On this day courageous, self-confident, purposeful people are born. Their life will be full of all kinds of events, both pleasant and not very. But, having gone through hardships, hardships, they will be able to achieve stability.

Those born on this day usually have many friends who are always ready to help and support them in difficult times, but also many envious people who will not miss the opportunity to gossip, intrigue, wanting to break and annoy. In the material sphere, slow but steady growth. The family is usually happy.

Born 18 January never part with childhood. They can be blamed for naivety, but it is difficult to blame prudence, avarice or greed. Born on this day as if tuned to a wave of naturalness. They love to have fun and do not really respect serious problems.

However, many of them seriously suffer from the adult demands that the world places on them. Accordingly, the main task of these people can be called the pursuit of maturity while maintaining childish vitality and naturalness.

Those born on January 18 make wonderful parents. They, like no one, understand the needs and demands of the child’s soul. At the same time, they themselves often have big problems with their parents – especially in adolescence and youth.

Separation from childhood is generally tragic for those born on January 18, therefore, parents need to be especially sensitive in this regard and not even try to deprive their gradually growing child of children’s habits and attachments. Too strict requirements can only sow the seeds of disobedience and protest.

Born 18 January want to see life easy and careless, but they need large doses of excitement and adventures that could stimulate them. If they are not able to find exciting sensations in everyday life, they have to turn to the world of fantasies, where everything is allowed and accessible. In this case, there is a danger of getting used to a similar method of self-isolation.

The most enlightened personalities of those born on January 18 are able to sublimate their fantasies and bring them to reality, which is expressed in the generation of new ideas and projects, as well as fresh approaches to solving old problems.

Therein, as for love, born January 18, as a rule, attract mundane people, who usually like the idea of ​​awakening in them long-forgotten childishness and naivety. Relations with such people give birth to a sense of peace and security on January 18.

Generally, births 18 January can be happy, even doing routine business, if only they have some free time that they can spend on pleasures. However, the best option for them is the ability to integrate their fantasies and direct them into the mainstream of creative projects.

Those born on 18 January are difficult to conquer in love because they are very shy and hesitant in love, despite always appearing strong and decisive. They might seem cold , and not very interested in love, but in reality, even if they are not lovey dovey, they have great feelings.

People with January 18 Birthday have Capricorn Sun Sign. Click here to check the compatibility of Capricorn with various other Zodiac Signs.

Born 18 January should be wary of excessive enthusiasm for empty fantasies. A solid daily routine, active participation in family and social affairs will help to somewhat land these people. The use of hallucinogens and antidepressants should be avoided.

The diet should include a variety of exotic dishes in the diet. However, simple foods should not be ruled out completely. Physical activity involves mild to moderate exercise; aggressive sports (wrestling, boxing, team games) are not welcome.

An indispensable condition for well-being is a full sleep, if possible you should include afternoon rest in your daily routine.

Advice for People Born on January 18

Peace is not the highest goal to strive for. Be consistent with reality, but do not forget to pay the bills. Beware of the tendency toward self-isolation. Try your best in any relationship.

Those born on January 18th share birthday with there famous people:

Garnet is the birthstone for those born on 18 January.

Garnet, the birthstone for January 18, has been used for centuries in jewelry and other decorative items. While many people know about the gemstone’s beauty, they may not be aware of the other benefits that garnet provides.