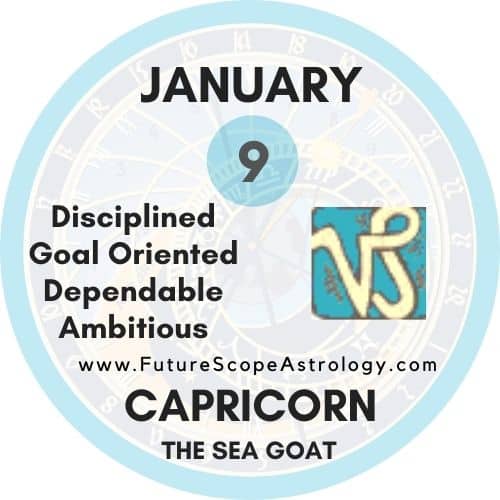 Is your Birthday on January 9 ? Know the Sun Sign, Personality, Compatibility and more….

For People born on January 9, the Zodiac sign is Capricorn. Capricorn is an earth sign. Capricorns are hard working and have good patience. They can be stubborn at times.

Traits of a person born on January 9

On this day energetic, strong-willed and decisive people are born. Acting with their characteristic pressure, they quickly achieve their goals. Their life will be filled with all kinds of successes. They are born leaders and have great organizational skills.

Skillfully planning all things, analyzing the smallest details, they protect themselves from many mistakes, which contributes to the rapid growth of wealth. The first half of their life might not be very successful. But in adulthood, gaining wisdom, knowledge, becoming wiser, they will be able to achieve a high position in society.

On January 9, highly ambitious personalities are born who want to reach the very top by all means. It should be noted that they not only want to occupy a high position, but also really become the best in their field of work.

Very remarkable is their ability, year after year, to act in this direction and devote all or at least most of their energy to it.

You cannot underestimate the willpower of people born on January 9 – they are able to exert extreme pressure on others and subjugate almost anyone.

Moreover, they have a remarkable ability to use even the smallest opportunities, as a result of which they never miss the chance to improve their situation.

Despite all the above, born 9 January sometimes make serious mistakes and miscalculations. Periodically, they have to suffer defeats or calculate losses. But theuy eventually rise above it all and reach the winning position again.

Fortunately, they have such well-developed flexibility and a sense of purpose that it is not difficult for them to recover from another shock. To inflict a final defeat on these people or force them to surrender is almost impossible.

Born 9 January highly value personal initiative, personal responsibility and personal freedom. For this reason, they can sometimes overlook some more promising tasks or underestimate those who prefer to work in a team.

Perhaps people born on this day should learn to perceive others as ordinary people, able to arouse interest with their character, approach to life, talents, finally, and not as a means to achieve some of their goals – this can give them an advantage in their long-term plans.

For personal growth, development, and, ultimately, for the success of those born on January 9, commitment to such, perhaps less dynamic, but more human values ​​such as kindness, understanding, and, most importantly, tolerance is of great importance.

People born on 9 January are so serious about fighting and working that they rarely have a desire to retire and rest on the laurels of their achievements, leading a measured and happy life.

They are literally obsessed with their work. Therefore, of course, it is difficult for them to relax at the end of the day. In such cases, it is very important that they always have a good friend or family member near them who can help them in this regard.

Also, do not underestimate the importance of laughter and good mood.

Being fighters by nature, they can use all types of weapons at their disposal in order to defeat their opponents. Moreover, they count on the same behavior from the opposition.

To get rid of the burden of unnecessary problems, those born on this day need to look at the world more broadly, without limiting themselves to just two alternatives (“white” or “black”).

Awareness of the fact that today’s opponents, perhaps in the future will become associates and friends, can significantly expand the range of solutions to their problems, as well as significantly strengthen their position in society.

Those born on 9 January are difficult to conquer in love because they are very shy and hesitant in love, despite always appearing strong and decisive. They might seem cold , and not very interested in love, but in reality, even if they are not lovey dovey, they have great feelings.

People with January 9 Birthday have Capricorn Sun Sign. Click here to check the compatibility of Capricorn with various other Zodiac Signs.

Those born on 9 January can experience the whole spectrum of stress ailments: headaches, anxiety, muscle tension, low resistance to infections, insomnia. To maintain health, you must learn to relax and not deny yourself the pleasures. An important role in this is played by family and social relations, regular vacations.

A diverse diet with the inclusion of exotic dishes in it will add full sensations. Those born on this day are recommended only mild physical activity, interspersed with rest, including afternoon sleep. Do not neglect vitamins and especially calcium.

Advice for People Born on January 9

Watch the children during the game. Do not let your ambition take precedence over the best human qualities. Be open to advice, take the opinions of others seriously.

Those born on January 9th share birthday with there famous people:

Garnet is the birthstone for those born on 9 January.

Garnet, the birthstone for January 9, has been used for centuries in jewelry and other decorative items. While many people know about the gemstone’s beauty, they may not be aware of the other benefits that garnet provides.