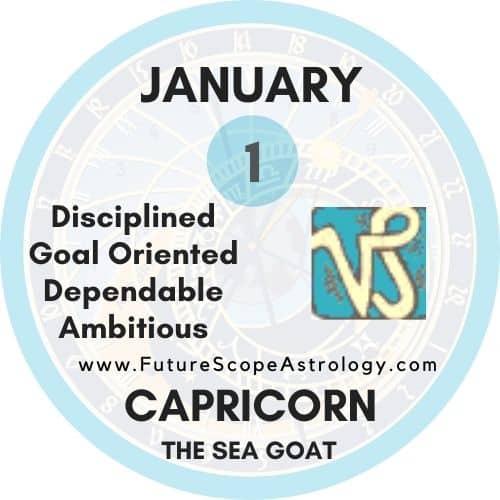 Is your Birthday on January 1 ? Know the Sun Sign, Personality, Compatibility and more….

For People born on January 1, the Zodiac sign is Capricorn. Capricorn is an earth sign. Capricorns are hard working and have good patience. They can be stubborn at times.

Traits of a person born on January 1

People born on this day are calm, hardworking and have intuition. In life, they will have to achieve everything through hard work.

At times, fate can be tough with them. Occasionally, their merits will be attributed to others, but if they can adequately overcome all obstacles and even the unfair attitude of others in relation to themselves, they will be able to create comfortable conditions for themselves in mature years.

People Born on 1 January they have an authoritarian character, they love strict organization and systematization in everything. They tend to communicate with others in a commanding tone – both at work and at home.

Often they are highly educated people and value education in others. In addition, they tend to stubbornly adhere to their (not always true) beliefs in everything. However, when it comes to realizing personal ambitions, their own principles sometimes make it difficult to move forward.

They turn out to be too honest, too loyal, too noble to conquer the heights that they have outlined for themselves.

Immensely respecting the order, those born on January 1 deliberately block possible maneuvers, thereby forcing themselves to act literally, not one step back from the plan, even in cases where it is necessary.

Moreover, the threshold for disturbing their emotional balance is very low, and it is precisely behind this threshold that their usually hidden, powerful impulsiveness is most fully revealed.

The person born on January 1 consists of elements, many of which are not only complex in themselves, but also seem to contradict others.

For example, these people are very responsible – and yet often take on much more responsibilities than they are able to fulfill. They are emotional – and at the same time they can be so full of their own emotions that as a result they lose the ability to express them.

Some of them adhere to liberal views, but act, on the contrary, conservatively or even reactionarily. All this testifies to the fact that in the soul of these people there is a constant tense struggle in which not all forces yield to their control, and in which they can sometimes be defeated.

From the point of view of a career for those born on January 1, it is very important at some point in life to stop and decide for themselves what they would like to achieve.

Then, after the final calculation of the strengths and weaknesses of their personality, they need to assess their chances of success as realistic as possible and set further goals in accordance with this.

Here, however, it is necessary to clearly separate those tasks that are urgent and those that can wait until now, draw up plans and adhere to them whenever possible.

If those born on January 1 decide to get to the top, they must not only control their emotions and resist stress, but also have enough patience to fulfill all that was planned.

A major drawback of those born on January 1 is their exceptional sensitivity, making them impatient and making them difficult if, for example, they occupy a secondary position.

Communicating with your friends or guiding others, especially as a teacher, those born on this day can enjoy the love of others and are not only charming, but also effective in their position.

However, if they work in a team where relations are not built on the mutual sympathy of employees, but rather on their struggle for career advancement, then they will have to get thick and impenetrable, like an elephant’s skin, and develop a completely new set of buttons for their feelings which not every one of their circle could put pressure on.

In the event that they manage to do all this, one can expect that their efforts will not be instantly nullified by emotional reactions. In addition to all the above,

For people born on 1 January, it is important not to take yourself too harshly. It should be remembered that a quick advance can sometimes end in complete failure.

Despite the fact that they consider themselves practical and pragmatic people, it is necessary to recognize that they also have some romantic dreams and, therefore, the need for their satisfaction.

Thus, the key to happiness and success for those born on January 1 is to find a harmonious combination between realism and emotional depth, so that their highest hopes do not end in bitter disappointments.

Turned towards their inner world, Capricorn are centered on their thoughts. It’s simple, they rarely reveals their feelings and never shows their emotions. To get there, they needs to feel confident and that can take time …

Those born on 1 January are difficult to conquer in love because they are very shy and hesitant in love, despite always appearing strong and decisive. They might seem cold , and not very interested in love, but in reality, even if they are not lovey dovey, they have great feelings.

People with January 1 Birthday have Capricorn Sun Sign. Click here to check the compatibility of Capricorn with various other Zodiac Signs.

Those born on 1 January are overwhelmed by secret fears and anxiety. Perhaps to avoid them, they should seek the help of a therapist.

In terms of physical health, those born on this day need to pay attention to the state of the digestive tract (tendency to constipation), so special attention should be paid to proper diet.

Reducing the consumption of sugar, flour products and animal fat – an indispensable condition for maintaining a healthy shape.

For those born on 1 January, medium physical activity is beneficial, even in the form of a daily morning exercise. Swimming and walking are also recommended.

Advice for People Born on January 1

Do not send mixed signals. Before expressing your desire, articulate it clearly.

Share your emotions with others. Long peace is from the realm of illusions.

Those born on January 1st share birthday with there famous people:

Garnet is the birthstone for those born on 1 January.

Garnet, the birthstone for January 1, has been used for centuries in jewelry and other decorative items. While many people know about the gemstone’s beauty, they may not be aware of the other benefits that garnet provides.