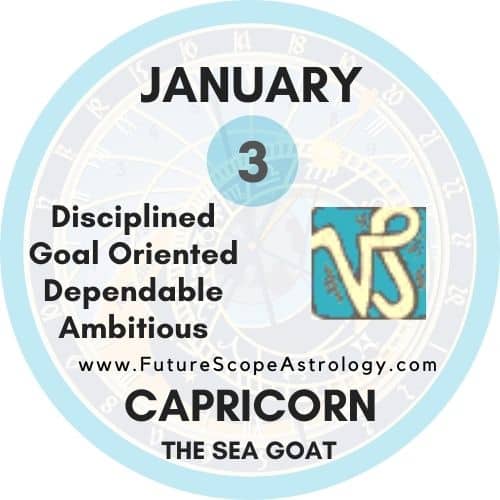 Is your Birthday on January 3 ? Know the Sun Sign, Personality, Compatibility and more….

For People born on January 3, the Zodiac sign is Capricorn. Capricorn is an earth sign. Capricorns are hard working and have good patience. They can be stubborn at times.

Traits of a person born on January 3

The vibrations of this day are such that enhance all the positive properties of nature. On this day ambitious people are born. They are independent and have strong opinions.

They are endowed with diverse talents. But it is difficult for them to work in teams and they may find it difficult to easily get along with others.

The life of people born on January 3 is determined by one very important quality: having taken up something, they are immersed in their occupation from the very first minute to the end.

Their enthusiasm for almost any activity they undertake is so great that it is impossible to imagine that they would be distracted at least for a short while, or even less so, give up their occupation.

However, such dedication can cause them certain difficulties; for example, when something does not work out, those born that day simply do not want to admit it – a defeat for them is worse than death.

In the same case, when everything goes as it should, they represent the most reliable workers that can be found – attentive, accurate, moderately proactive.

They are not bored to carry out even the simplest instructions, mainly because of their inherent sense of responsibility.

Those born on 3 January will never try to take on as few responsibilities as possible. They know very well that to do so is simply to shift some of their functions to others, which is not compatible with their principles.

People born on 3 January are often very stubborn. At the same time, they are perfectly able to convince others of their own rightness. As a rule, it is difficult for those who have agreed on something with them, and sometimes it is even impossible to abandon their obligations.

Those born on this day can get things done very well. To do this, they are able to use some hidden methods of “tightening the screws”, sometimes humor or even outright flattery, depending on how you can seduce the object of attention.

Despite a similar nuance with regard to work, they can rarely be blamed for the selfish use of others for their own personal purposes, since the loyalty of the people born on January 3 to their organization or business is out of reach. Born 3 January have nothing against being on the line of fire.

They can be openly aggressive if provoked, but otherwise they will avoid conflicts, behave politely and decently in all respects. Born on this day are wise and learn from experiences. Their wisdom is not only based on the knowledge obtained from books, but also from their keen observation.

Despite the fact that they are never averse to talking on elevated topics, in their actions there is always a purely earthly practicality. As a rule, they always give others a choice – to do something in good conditions or not, but this “something” should be done, it is impossible to refuse their request.

They have strong will, perseverance and the ability to convince others.

Their perseverance can cause others understandable irritation, which will increase, interfere with communication and, with time, may even result in uncontrolled outbursts of anger on both sides. Although, it should be noted that, as a rule, the opposite side loses patience first.

People born on 3 January are characterized by a very high level of self-control, which is one of the reasons for their victories in most conflict situations.

It is useful for them to choose a profession in which they would be able to put their personal stamp on everything they do, and harmoniously combine personal freedom with duty in reasonable proportions.

Turned towards their inner world, Capricorn are centered on their thoughts. It’s simple, they rarely reveals their feelings and never shows their emotions. To get there, they needs to feel confident and that can take time …

Those born on 3 January are difficult to conquer in love because they are very shy and hesitant in love, despite always appearing strong and decisive. They might seem cold , and not very interested in love, but in reality, even if they are not lovey dovey, they have great feelings.

People with January 3 Birthday have Capricorn Sun Sign. Click here to check the compatibility of Capricorn with various other Zodiac Signs.

Those born on 3 January are quite prudent in relation to their health and organize regular visits to the dentist and therapist for themselves. However, they too often sacrifice their health and well-being for work.

Therefore, it is important from childhood to educate them in the need for regular and proper nutrition, healthy sleep and personal hygiene. Exercise, including competitive and team sports are suited for them. Those born 3 January should be wary of problems with allergies and skin diseases.

Advice for People Born on January 3

You are not always destined to win. Be sensitive to the needs of other people. Do not expect the same dedication from everyone that you demonstrate. Recognize and respect the difference in people.

Those born on January 3rd share birthday with there famous people:

Garnet is the birthstone for those born on 3 January.

Garnet, the birthstone for January 3, has been used for centuries in jewelry and other decorative items. While many people know about the gemstone’s beauty, they may not be aware of the other benefits that garnet provides.