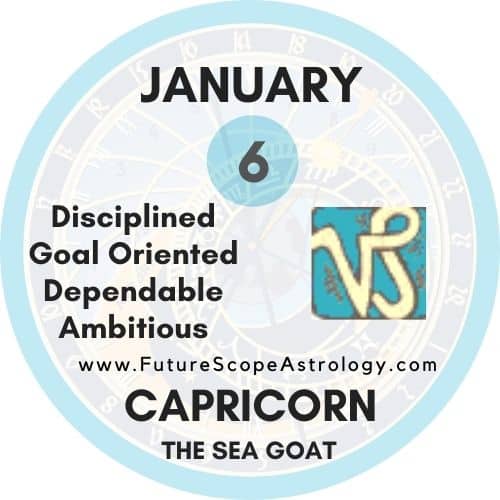 Is your Birthday on January 6 ? Know the Sun Sign, Personality, Compatibility and more….

For People born on January 6, the Zodiac sign is Capricorn. Capricorn is an earth sign. Capricorns are hard working and have good patience. They can be stubborn at times.

Traits of a person born on January 6

The vibrations of this day are such that they enhance all the positive aspects of man, endowing him with a special charm. These people have oratory skills talent like a diplomat. They cleverly extinguish conflicts and aggression.

They are able to win over people. People are drawn to them because next to them they are comfortable, reliable, they can be friends, they will always help and support. They will not betray, they can keep secrets.

In the financial sector, they have been successful. In marriage, they are happy because they are devoted to their home and family, honor family traditions and raise children in the same way.

Justification of something is a central theme in the lives of those born on January 6. They are very fond of exploring, finding a rational kernel in all matters – whether it be some kind of metaphysical problems or purely pragmatic situations.

Such a thirst to find meaning in life of these people can manifest itself in many different ways – from philosophical speculation to really serious and deep searches for truth.

Even the most materialistically oriented individuals born on this day believe in something sacred to them – be it nature, the universal mind or soul.

Their very presence in this world is for them one more proof of the existence of a certain universal miraculous power.

The most refined natures from among those born on January 6 are trying to really bring the effects of this invisible power to life with the help of love, duty, self-sacrifice and commitment to initiation.

They are interested in any examples of the manifestation of the spirit in material life. In general, their interest in the outside world is more philosophical or even poetic than technical.

But, despite the fact that they often have extremely subjective views, they are able to express their very abstract ideas and thoughts in an unusually clear and understandable way for those around them.

Apparently, therefore, they are able to be teachers in the highest sense of the word, regardless of their professional affiliation.

Having great courage, those born January 6, are not inclined to avoid danger. They are well aware of the power of the dark forces and the threat emanating from them.

But at the same time they can radiate innocence and light in any situation that can soften the most rigid hearts and convince the most stubborn skeptics.

Their faith, unlike many others, is truly true and remains unshakable even in the most difficult times for them. It cannot be said that this is due only to a huge belief in oneself, rather, their belief that there is a certain more powerful force, the conductors of which they are.

Those born on January 6 can sometimes face difficulties. Perhaps the most common problem for them is that they tend to see proof of their ideas in absolutely everything around them and eventually begin to truly believe that every, even the most insignificant, event or incident in their life must certainly have some special value.

Another difficulty is that they usually have an urgent need for followers and students, which over the years can develop into completely unjustified excessive demands on others; especially those who prefer to look at life from a more logically substantiated materialistic point of view and whose desire to be a student is relatively small.

Whatever is said about those born on January 6, their feelings and emotions are always sincere, and their opinions are honest.

Some may consider these people look away from real life, others may be naïve or simply not notice them, but they are not at all offended by this attitude, and their character does not change at all, even with age.

In any case, those born on January 6 are far ahead of their critics, perhaps due to the fact that from an early age to very old age they manage to preserve the children’s perception of the world as a miracle.

Those born on 6 January are difficult to conquer in love because they are very shy and hesitant in love, despite always appearing strong and decisive. They might seem cold , and not very interested in love, but in reality, even if they are not lovey dovey, they have great feelings.

People with January 6 Birthday have Capricorn Sun Sign. Click here to check the compatibility of Capricorn with various other Zodiac Signs.

Those born on 6 January should be wary of the tendency to excessive sacrifice. By their immense service to other people, they can harm their own bodies.

In addition, they may become overly dependent on a more influential person who is able to impose on them a regime that is detrimental to health.

To live healthy, those born on January 6 need to follow the criteria of moderation and balance. Proven diets, reasonable physical activity and regular sleep are the best suited lifestyle to embrace for them.

Advice for People Born on January 6

Remember that the life you live is your life. Do not adapt it to the desires of others. Give lot of attention to yourself, but do not forget about the needs of other people. Serve only those goals that truly deserve your attention.

Those born on January 6th share birthday with there famous people:

Garnet is the birthstone for those born on 6 January.

Garnet, the birthstone for January 6, has been used for centuries in jewelry and other decorative items. While many people know about the gemstone’s beauty, they may not be aware of the other benefits that garnet provides.