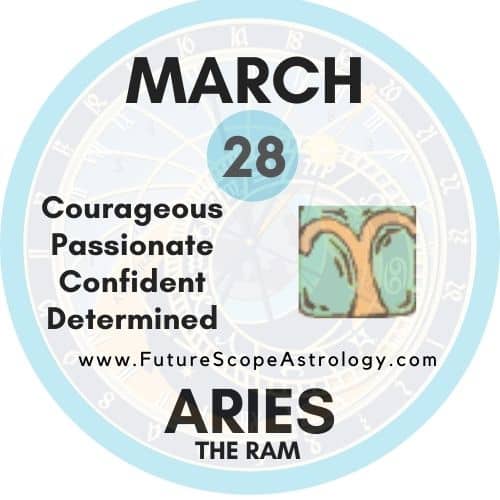 Is your Birthday on March 28 ? Know the Sun Sign, Personality, Compatibility and more….

For People born on March 28 the Zodiac sign is Aries.

On March 28, people with a dual nature are born. What a person will become depends primarily on the parents and family in which he was born. If parents will develop the positive aspects of nature and remove the negative, then such a person in life will be easy, and he will become happy.

Also, in the case when in childhood parents do not educate the child with tenderness and love, in the future he will have to work on himself, improve himself.

Everything will depend on a person’s choice. On the one hand, these people are inherently explosive. They are able to show cruelty, to commit rash acts. When they pursue their interests, they can easily go over their heads, while not paying attention to any principles and laws.

They are masterful adventurers who constantly get into unpleasant situations, and also create all kinds of troubles and problems for themselves. Fate gives these people enormous magnetic energy, which helps to influence and control people, which is often used for selfish purposes.

Such a person at work and in the family is not able to listen to the opinions of others. Everything must be subordinated to his will, everything must be in the way that he will wish and say. Also in the material sphere everything will depend on the personal efforts of a person.

But on the other hand, people born on March 28 are endowed with the potential to create and realize their desires, ideas, plans. Such an ability will allow them to make a wonderful career, they will be able to gain fame, and they will also be able to create a prosperous life that will be filled with abundance and grace.

Fate also gives him the talent of a rationalizer and courage, gives him a large supply of creative energy.

Often people born on March 28 appear to the world as naive creatures. They have to follow their own path in life. But there are cases when in the direction of movement they are completely unable to navigate.

They are extremely attentive to the implementation of urgent tasks. These people are deeply focused in their work. They will go about their business, even if various passions rage around.

Despite the fact that those born on this day are indifferent to the feelings and feelings of others, they are very popular personalities whom they love for their sincere and open nature. Their humor is completely devoid of malice, for which they appreciate it.

Any circumstances and events, whether they are good or bad, people born on March 28, always take calmly. Some kind of conciliatory philosophy does not play a role here.

It’s just that these people are not too interested in what is happening around. Usually they want to be left alone, despite the fact that they have extraordinary abilities for social activities.

People born on March 28 clearly show a need for solitude. Therefore, they often equip their home like a fortress, thereby isolating themselves from the outside world. Living in places that are secluded and remote from the hustle and bustle for their complete happiness will be a necessity.

In their professions, they do not strive to be the first. Even those who reach the peaks feel uncomfortable on the sidelines. They are also naïve people, devoid of determination and perseverance, which often makes it difficult to make a sharp throw forward.

Sometimes a comfortable position with a lower level can bring them satisfaction if it at the same time provides them with a certain degree of autonomy.

To successfully function in a socially significant post, most people born on March 28 will not have enough self-confidence. They will not believe in their own strengths, despite the fact that they can cope with work of any complexity without difficulty.

Therefore, many forever hesitate in a career relationship. And throughout their lives they may be tormented by the question of the correctness of their choice, deed. Born March 28, self-confidence will not be lacking.

They will not believe in their own strengths, despite the fact that they can cope with work of any complexity without difficulty. Therefore, many forever hesitate in a career relationship.

Throughout their lives they may be tormented by the question of the correctness of their choice, deed. Born March 28, self-confidence will not be lacking. They will not believe in their own strengths, despite the fact that they can cope with work of any complexity without difficulty.

Therefore, many forever hesitate in a career relationship. And throughout their lives they may be tormented by the question of the correctness of their choice, deed.

Born 28 march in family, friendship and partnership show loyalty and loyalty. They can spare no time and effort to help solve the problems of others. Also, sometimes they can play the role of an intermediary between people when a desire to come to an agreement appears between them.

They may have conflicts between public call and personal aspirations.

Usually they focus on private priorities, so they need to protect their interests, rarely find themselves in a vulnerable situation, such as emotional, political or financial.

People who seek emotional and deep relationships from time to time sometimes experience considerable frustration or annoyance. Of course, people born on March 28 are good buddies, but when they start to feel that their own independence is at stake, they disappear right away.

Such a sudden disappearance for their friends who tried to express their feelings, tenderness and love openly could turn into a catastrophe.

In fact, people born on March 28 are quite emotional people, they just do not want to reveal their fears, feelings, cherished desires. Often they hide them behind childishness and outward naivety.

People with March 28 Birthday have Aries Sun Sign. Click here to check the compatibility of Aries with various other Zodiac Signs.

People born on March 28 should beware of unexpected incidents and accidents that are not related to their professional activities, as they have a low sense of self-preservation.

They are peppy and cheerful people, but they are not very enthusiastic about various medical examinations. Any depression can lay them easily on both shoulder blades. But on the other hand, if this happens, you should take a chance, since depression will allow them to look into their own depths.

Reason and consciousness allow people born on March 28 to take care of their physical health, and also allow to avoid diseases and misfortunes, which are usually the result of primitive medical illiteracy.

Food, of course, is a means that nourishes the body with the necessary energy, but you should eat it with pleasure, which allows food to be better absorbed. Exercise is mandatory for every person. So that they bring the greatest benefit, you should take them as a great way, able to maintain good shape.

Advice for People Born on March 28

You should plan your life carefully, while leaving a place for contemplation and reflection. When there is a feeling that the forces are over, or there is a desire to better know yourself, it is necessary to provide for a short vacation in your schedule.

The pace of mental activity needs to be tempered. You should also release the accumulated steam. Do not provoke antagonism. It’s best to set yourself up for the goal. You should work on yourself.

Aquamarine and bloodstone are the two birthstone for those born on 28 March.

The color of official birthstone for March 28 (Aquamarine) is Blue.