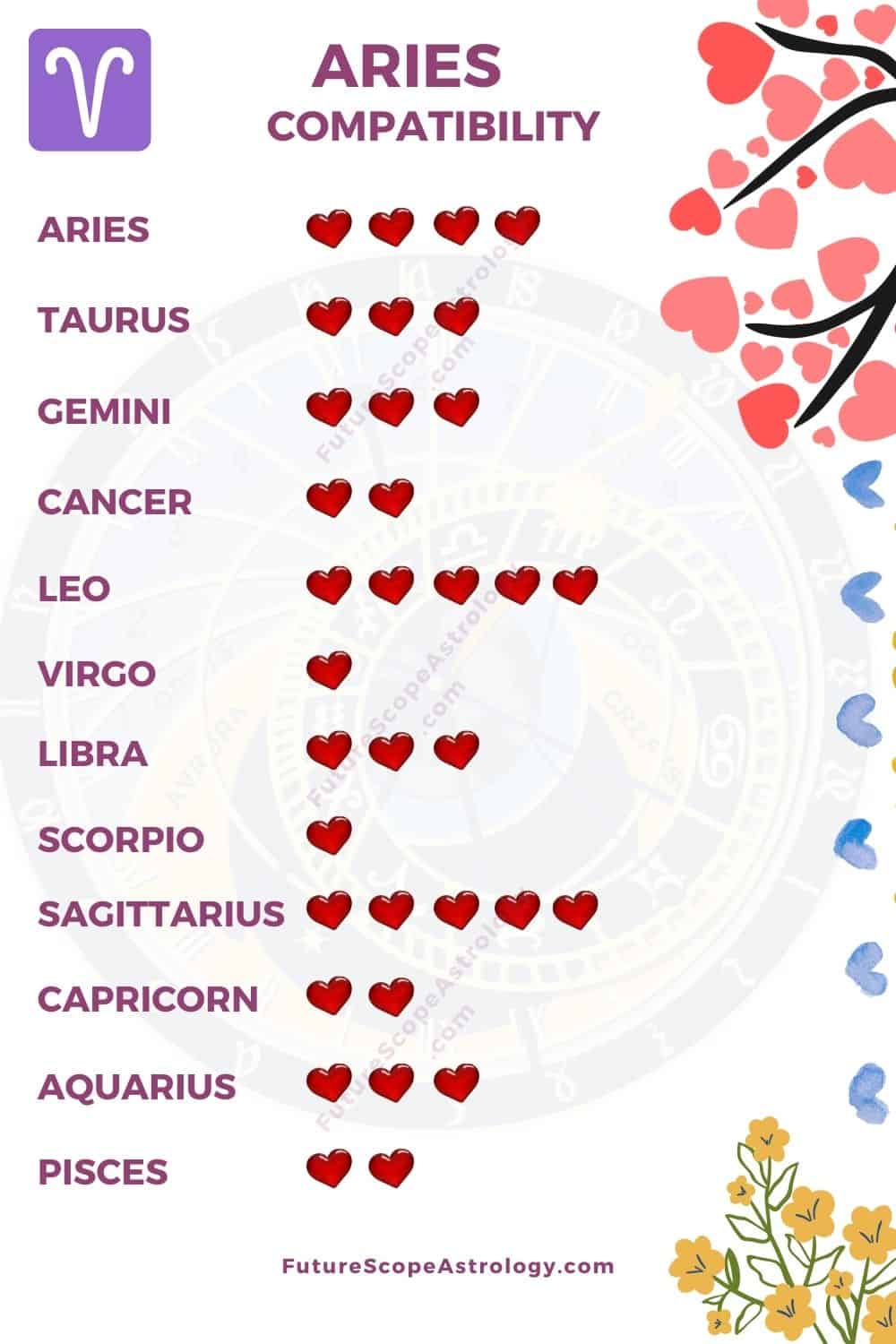 Aries Compatibility with other Zodiac Signs

Aries is a fire sign. Leo and Sagittarius are also fire signs.

The strong character and the tendency of command of both cause numerous confrontations. One of the two will always take the initiative. The impatience will be a constant and the rivalry is presented continuously.

For the relationship to thrive it is important to develop the potential, within the differences.

The understanding is complicated, Aries is very impulsive and quick actions, while Taurus needs the time to analyze each action.

These opposite characteristics give rise to very creative acts, one brings what the other lacks. Aries will benefit from the patience and practicality of his partner.

This relationship complements very well, since it will be Gemini who contributes the ideas and Aries will put them into practice. Agility in action and mental action will be a constant in the relationship.

The difference in criteria will be noticeable, only the practice of patience by Aries will make the relationship prosper.

Both are very different in nature. Aries is fearless and extremely independent, and one could even say that he is a bit reckless, while Cancer is homey and sensitive, he needs the containment and protection of his partner.

The rigidity of Aries will deeply hurt Cancer’s sensitivity.

Read About Aries and Cancer Compatibility …

This combination is energetic, although they can be complemented, the power struggles and their need to impose themselves will always be latent. Only when both join forces and leave the fighting, everything will get under way.

Aries with his organizational capacity will help Leo when he is overcome by anger and outbursts.

Aries embodies the action, it is the energy, it is all impulse, which never stops to analyze its acts while its partner through its intellectual capacity contributes the meticulous analysis.

It is a very good combination to give action to ideas, inconveniences arise when making decisions.

Although this combination is totally opposite, they complement each other very well since Aries will bring strength and your partner will display all his ability to maintain harmony in difficult times.

One brings what the other lacks. The contribution of both is the one that allows the right coupling; elements lacking one will be provided by the other.

This relationship is quite stormy in everyday life, since both have a strong character, although Scorpio expresses it very differently.

The discussions are a constant because of this need to be imposed, in privacy they are completed very well since both have a passion without limits.

This relationship complements quite well, this union is very enriching, Aries offers the physical part while Sagittarius, the mental aspect.

At times, the relationship is complicated, because of Aries’ overwhelming and impatient character, however both are able to undertake adventures very easily and have fun in a big way.

It is a relationship that, apparently, they have nothing in common, but Aries is contained and stopped by the goat, when he begins to commit excesses. In everyday life, Aries will learn from the ability of his partner.

Aries shows the rush to solve things and Capricorn will lessen it, since it represents the experience.

This relationship is extraordinarily complemented. Aries with his great inner strength will launch all the creative and original ideas that his partner proposes.

In the intimacy they are completed very well since both get carried away by the exciting experiences. Complications appear when the lack of reflection and the respective stubbornness are linked.

Apparently they have nothing in common. Aries, being totally independent, is bothered by people who are not, and Pisces shows a need to live in symbiosis with extreme sensitivity.

But deep inside Aries loves to be content with the tenderness and love that his partner gives him.

Aries Compatibility with other Zodiac Signs

1 thought on “Aries Compatibility: love, relationships (all you need to know)”