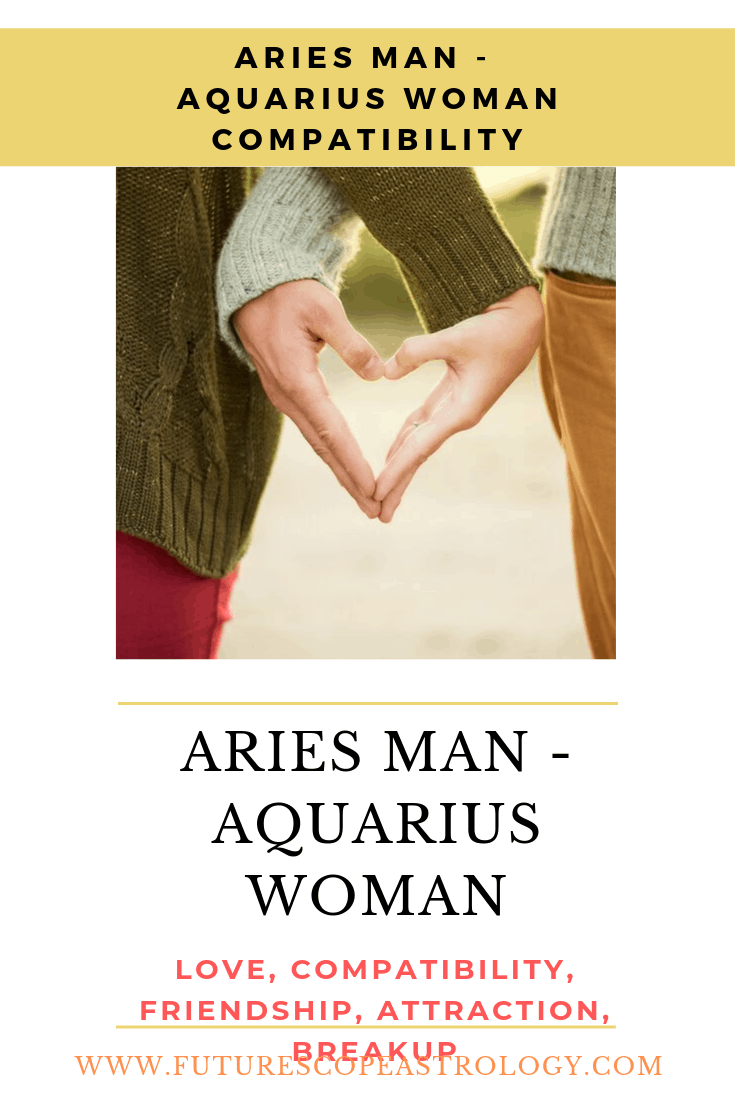 Aries and Aquarius have a lot in common and a very high degree of compatibility. Both signs are independent, caring, optimistic and enthusiastic. They like strong emotions, the courage and progressive character of Aquarians tend to attract Aries a lot.

A typical Aries man surrenders to love swiftly and recklessly and expects the same from his chosen one. Not waiting for an immediate response, he is offended: “But who needs it?” Perhaps he needs it, but he cannot afford to love unrequitedly.

Aries and Aquarius compatibility is excellent and both can feel that they are in a well-tuned relationship and that it flows correctly in almost every way, although sometimes the impetus of the ram can cause clashes with a rational and logical Aquarius.

Aries has innate leadership, but Aquarius does not want to be guided and is not very tolerant about it. This can be counterproductive if they cannot find some balanced way of working as a team and being independent, but equal.

Aquarian women are quite vulnerable on an emotional level and often have moments when they need to express their feelings freely to those who they consider to be trustworthy. The ram can show its equally vulnerable side on these occasions, but both emotional exaltations can cause injury if not handled properly.

It is entirely possible for both signs to develop a healthy bond at the level of love and friendship, but it is a relationship that requires a lot of care and prudence, since the two components of the relationship have limits that are very easy to exceed.

In the end, the basis of success in that relationship is achieved when both signs manage to express themselves freely without being overwhelming on the other, this being the ability that will make the difference between winning or losing in the love arena.

For an Aquarius Woman, it is hard for her to make a choice. This is a curse or blessing of Uranus – she finds something exciting or interesting in almost every stranger. And then, how to distinguish passion from love?

She constantly confuses love and friendship, but she does not mix love and physical attraction. Her element is Air, she was born under a mental sign and therefore seeks intellectual kinship. It’s not that she didn’t make mistakes or was immaculate – no … She’s just looking for something else but physical pleasures.

An intimate relationship between both signs brings great challenges. Aries is a fire sign and as such its expression is passionate, but this passion only overflows with what interests and passionates them, for which they have a host of emotions that are reserved only for the person they love.

Being the Aquarian woman of discreet emotions, it is very easy for the ram man to overwhelm her with his displays of affection, which can be frustrating for him if he does not learn to understand the nature of his partner.

The Aries man is primitive and sexual in nature, sexual energy is where all the impetus that manifests in the different facets of his existence comes from. This is very attractive to the water woman, who also has strong sexual urges and an imaginative mind.

There is very little room for these signs to hide things from each other during their daily routine, as they are both very honest, so a relationship between them has excellent long-term prospects, as long as they learn to maintain a balance in the opposite behaviors.

In intimacy , the relationships between Aries and Aquarius are usually satisfactory for both. The predisposition of the Aries to try new things and the ability to invent new experiences and games of the Aquarius, complement each other very well, so the sexual compatibility of these two signs is high.

Although it seems a bit confusing, the Aquarius woman can be thoughtful and very reserved in her emotional expression, but at the same time she possesses an extravagance that makes her outgoing when she is in different social situations, such as meetings with friends and celebrations.

She loves helping people and showing her humanitarian side by contributing as much as she can to any cause, so it is not uncommon to see her helping out in the kitchen during any gathering.

They are charming and mysterious, two qualities that only manifest when she wishes it to happen; she allows the world to see only what she wants to show. Perhaps for this reason, very few people manage to establish such a high level of intimacy, even when it is excellent for making new friends.

An Aries man is much easier to get along with, although he is often less outgoing. He generally prefers to surround himself with friends and people who are easily impressed with his abilities and skills, as this can feed his ego, which is constantly in need of a new challenge.

He does not expect almost anything from people, that is, he does not have particular demands or specific requirements to establish real friendship with a person, it is enough that he shows a sincere treatment, for Aries to respond, showing that he will be by his side even in times of necessity.

Unlike the water signs, the ram easily accepts different people in its circle and it is not difficult to win their heart, although very few will be able to witness its deeper emotional side, since it is only reserved for its partner and people of m-maximum intimacy.

In the professional field, Aquarius has a great advantage over Aries, since the first one is very easy to work in a team while the second prefers leadership spaces or individual work, instead of sharing situations of equality, over all for its competitive spirit. However, it is necessary to clarify that although they do not feel comfortable in a subordinate situation, Aries is capable of adapting and is always open to new experiences.

Competitiveness is present in the work area where Aries works and he will always try to stand out with his skills and will not allow anyone to get in his way.

In the case of Aquarius, there is no greater desire to compete in their professional development and their ambition is almost non-existent. She will prefer a quiet job, whose impact is evident in its impact on society, so the career they choose has a lot to do with their humanitarian nature and they are always interested in helping others.

An employment relationship between both signs cannot be considered simple, but it can be very satisfactory. If you are truly in love, working together can become an exciting experience. Working in different fields, each can contribute ideas to the other’s work and serve as support and complement.

A possible barrier to a relationship between Aries and Aquarius is the self-centeredness of many Aries, who often put their own interests before those of others, which contrasts with the tendency for Aquarians to worry about others before their own. own happiness and romantic relationship.