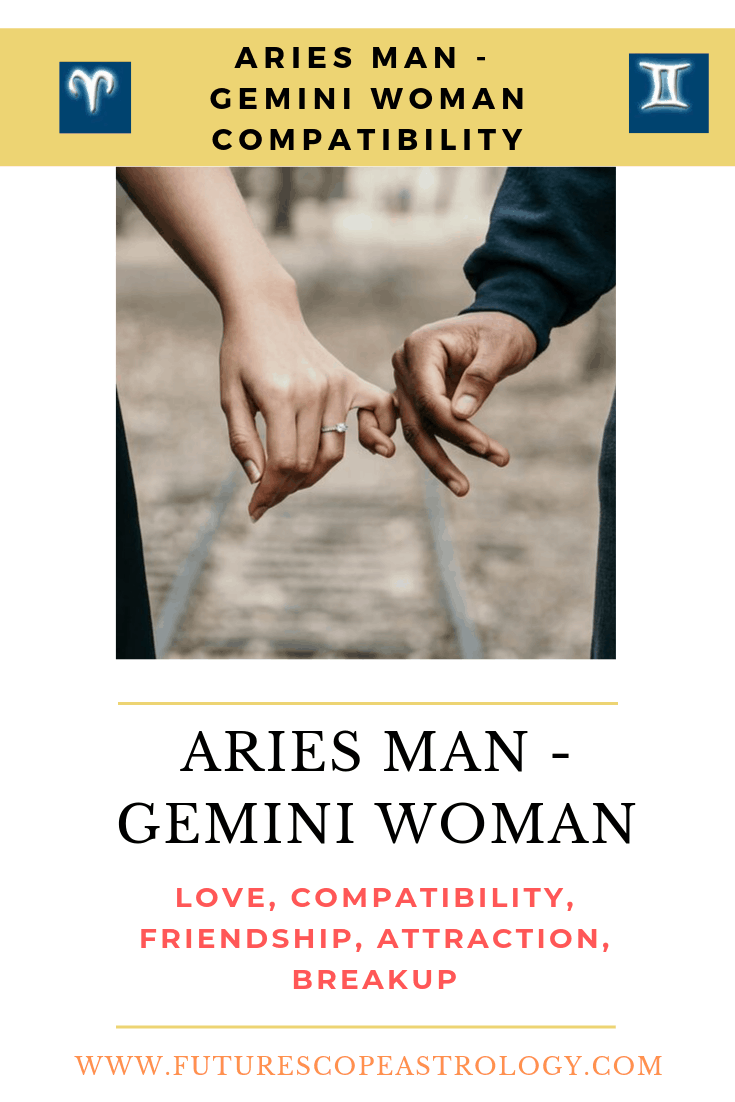 Aries Man and Gemini Woman know how to enjoy life and they never have a dull time when they are together. The Aries man is sincere and direct, he is what is on his mind. He is a man of action.

Aries Man and Gemini Woman relationship has a great potential and if they are able to overcome their fear of commitment. They are bound to a happy future full of love, games and challenges.

The only problem that may arise is the unwillingness of Aries Man to listen to the Gemini woman – he believes that things can be explained with only a few words.

The Aries man is more sexually aggressive than Gemini Woman, but if she tries to put out his fire that will only make his fire blaze even stronger than before.

Unless they met at the institute and soon got married, which happens with these two signs quite often, because they are always in a hurry, the Aries man can be incredibly angry with the past love life of the Gemini woman, most likely too saturated by the standards of generally accepted morality.

In her past, there will almost certainly be, if not a couple of ex-husbands, then at least half a dozen annulled engagements or a few still flickering sparks.

All representatives of the sign of Gemini should be careful with early marriages, unless they have the Moon or Ascendant in the signs of Capricorn, Virgo, Cancer or Taurus.

All her life, Gemini woman believes that there are golden windows at the top of the hill near the house. She scrambles hard; there and, looking down, discovers that the coveted house is at the foot.

Then she slides back and reopens that at the bottom of the house are the most ordinary windows, as she thought at first, then she looks up, sees the gold windows, decides that she was wrong, and again wearily rises up for the next disappointment.

Why are these golden windows so elusive?

She will have to spend a lot of spiritual and physical strength until she understands that the reflection of the Sun is only an illusion, depending on the time of day, and the position of the viewer.

Sometimes a Gemini woman may think that the old love was exactly the one with the golden opportunities, but before she realizes that this is an illusion, she will lose the man, leaving him standing alone on the top of the hill or at the foot.

Her nostalgia for yesterday’s novels would never arouse Aries Man’s sympathy, even if he would sigh from time to time about days gone by.

Remember the egocentrism of Aries. He can do that. She is not. Why? Because he knows that his nostalgia is innocent and will not lead to anything. But in his companion, he is not so sure.

As for sex, these men and women will be sure at first that they are perfect for each other. The Aries man dreams of arriving in the garden of love on a carpeted carpet right from the Arabian night (or from centuries of chivalry, anyway), and the Twin Woman will brilliantly play a role in his dream play.

With her, he will never know who is waiting for him in the evening in the privacy of the bedroom. It could be Cleopatra, George Sand, Mata Hari, Lady Hamilton or anyone else. This cannot but excite him.

His own sexual expression is direct and powerful. Her is a little more elusive and complicated. True, he likes to make their lovemaking look like a poetic novel, but he prefers to quench his thirst in a stream of direct and pure passion.

There is often something incomprehensible in her attitude to physical love, so he can even accuse her of being somewhere else in moments of intimacy, and she may be offended by his gross invasion of the most secret – in her thoughts.

In their relationship, there may be several more traps associated with a possible lack of willpower and stability. Aries Man has more than enough strength and energy, but the ability not to quit what has been started is not on the list of his advantages.

A man always subconsciously depends on his woman, who must make up for what he lacks. Relying on a Gemini woman is like holding onto a feather during a strong wind.

Neither willpower nor reliability are among her talents (unless her Ascendant or Moon are in the sign of Cancer or any sign of the Earth, and, of course, the same is true for him). Consequently, these two are able to rekindle a lot of quarrels, condoning weaknesses to put aside everything for later and each other’s instabilities.

He, sometimes feeling that she was looking for something that never existed, could not understand that if he was a little softer, she could turn the fruits of a living imagination into an equally wonderful reality. In the imagination of the Gemini woman, a truthful picture sparkles of what could have happened if the images took shape.

These forever young man and woman can hear the same music together and follow its sounds for many happy years, if she understands that his jealous and sharp anger stems from the emotional vulnerability of the Aries sign, and if he respects her intrigue with her second “I “

He is so bright and brave, so friendly, open and energetic. She is so feminine, charming, versatile and spontaneous. Unless they try to change each other, they can forever remain a boy and a girl. And children are the happiest people in the world.