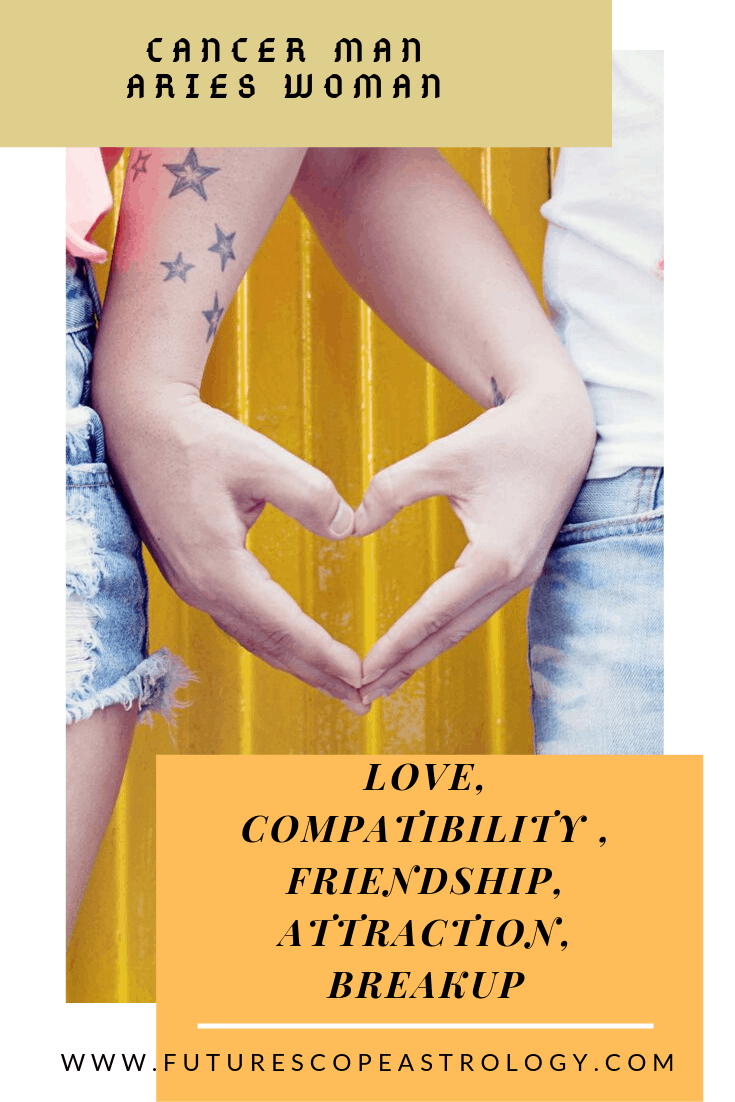 The compatibility between Aries and Cancer is regular . When Cancer begins a relationship with Aries, an immediate emotional connection is usually established between the two .

The sign of Cancer will be very attracted to the passionate, confident and enthusiastic air of Aries, who, in turn, will feel at peace with being with a Cancer.

It is an interesting combination of elements, which can be positive, although possibly more as friendship than as a long-term relationship, because the way of being and the emotional needs of these two signs are quite different.

The differences between the Aries woman and the Cancer man are usually from heaven to earth. The great talkativeness and extroversion of Aries contrasts sharply with Cancer’s shyness.

Of course, these are its most superficial aspects. Looking much more closely and beyond the obvious, it is possible to find a deep connection between the Cancer man and the Aries woman regarding their emotional needs.

Aries and Cancer share a strong need for the safety of being loved. This need for validation, well understood without reaching mutual dependence, may be the key to building a strong relationship between opposite signs, water and fire.

If there is something that characterizes Cancer it is its deep sensitivity. Although this sign is usually cold and distant, in reality the Cancer man is extremely sentimental and devoted to his loved ones.

However, if he passes by distant it is because he is extremely shy and does not usually open quickly to his acquaintances. Although the Cancer man is very reserved, he is also subject to sudden mood swings. These qualities contrast with the Aries personality that we explore below.

Aries is characterized by many things, including its avid thirst for adventure and its audacity when introducing itself to others.

Aries is sweet but is also characterized by not having hairs on the tongue to say what he thinks or restrictions on his gestures, which usually show very well his true state of mind.

In addition, she is usually very open to new relationships because she is very sociable. Sociability and strength are characteristics of the Aries woman, but behind such an appearance there is also a very sensitive heart to love relationships and compassion for others.

Good intimate relation , although Cancer may notice a lack of clarity on an emotional level and will need a less exhausting and more stable domestic life than many Aries are able to offer.

The Aries-Cancer couple in bed is one of the most explosive mixtures that exist. This is because Aries brings passion and energy to the act while Cancer brings the emotional depth and security necessary for pleasure to be maximized.

The Aries woman is characterized by her dynamism and passion, but also during sexual activity she can feel somewhat vulnerable. Cancer, although it is not as energetic as Aries, provides the perfect complement that is nothing more than the depth and security necessary for the act to be more than satisfactory.

Aries and Cancer are opposite signs. One is water and the other is fire. On certain occasions the Cancer man may feel compelled to protect and care more for the Aries woman. In these cases, attention is often perceived as excessive on the part of Aries, who is a free spirit who demands a lot of autonomy and who has the capacities to fend for herself.

Too much water can end up extinguishing the existing flame in the relationship. It is necessary that there is a mutual recognition of the needs of the couple so that the same does not decay and dissolve.

In a serious relationship , Cancer must continually try to keep up with Aries and get used to the extremely fast pace of this fire sign, while Aries must do everything possible not to get bored next to Cancer. Cancerians are often very demanding people – with themselves and with their partner.

Although both signs are cardinal and mobile signs, indicating flexibility and movement in his life, Cancer is much more withdrawn and homey than Aries while Aries is more energetic and prone to quick decisions. Cancer’s continual demands will afflict Aries, who needs to get out and relate both in his professional life and in his personal life.

Cancer needs a commitment that many Aries can offer and is a much more emotional sign than Aries . This means that for a long-term relationship to work, Aries must be prepared to move slowly and sensitively.

Aries can be an ideal companion for shy and cautious Cancers, as it can encourage them to take the initiative and motivate them to explore other possibilities.

Some important differences in needs between Aries women and Cancer men are a matter of accentuation rather than radical differences. In this sense, the Cancer man usually gives much more importance to the family than to other things.

The Aries woman, although she also gives a predominant place to the family, can, on certain occasions, prioritize other aspects, such as her personal development. Cancer men must learn to recognize and respect these interests in order for the relationship to work in a healthy way.