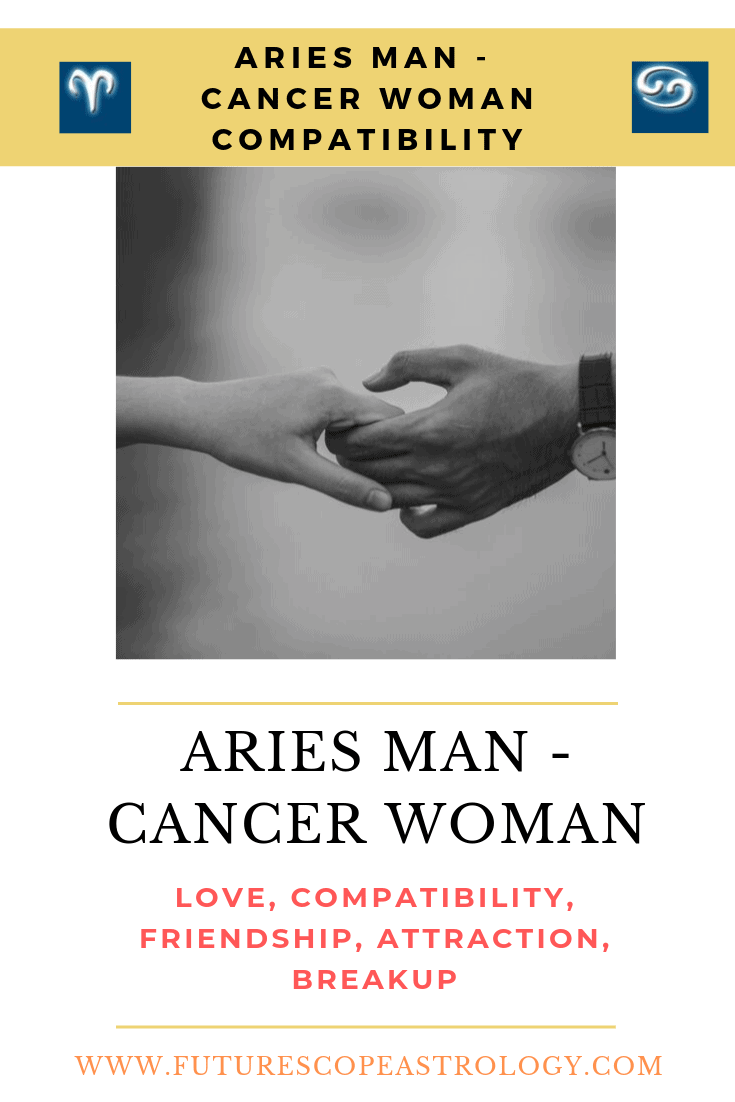 Aries (March 21 to April 19) is a fire sign that needs to be on top. Being the first sign of the zodiac, your destiny is leadership. In contrast, the Cancer woman (June 22 to July 22) is very calm, warm and careful, since she is governed by water.

The compatibility between Aries and Cancer is regular . When Cancer begins a relationship with Aries, an immediate connection is usually established between them on an emotional level . The sign of Cancer will be very attracted to the passionate, confident and enthusiastic air of Aries, who in turn, will feel at peace when being with a Cancer.

They are two opposite signs of the zodiac, which coincidentally enter the list of “incompatible” or “worst matches” of each other, although this does not imply that a relationship between them is doomed to failure.

Both can become compatible if they can understand the fundamental nature of each sign, something that would allow them to avoid conflict zones and anticipate shocks, inclining to show the traits that the couple values. Of course, it is not an easy task and it can be exhausting for both of you.

The romantic relationship between the two signs almost always results in a stormy experience, if they get past the initial stage of courtship. Aries men have a red-hot personality, as a good sign of fire, for which they are brave, daring and adventurous. Also, they become vain and self-centered.

A woman with cancer is much calmer and more reserved, with the first clash of personalities occurring. For a long-term relationship, Aries will almost never feel comfortable with the personality expressed by a woman ruled by this sign, since he will understand that she will not assume the commitment of what it means to establish a relationship with him.

As eventual lovers, the relationship can work out, but in the long term, Aries needs freedom and Cancer is committed to an almost suffocating commitment.

The first problem that arises between the two is communication; being incompatible, it is a problem for both to understand the needs of the other and translate the information they receive in terms of gestures, ways of acting and ways of behaving.

She tends to feel needy and he yearns for freedom. The desire to feel needed is diametrically opposed to the freedom that Aries needs to experience.

When the Aries man is at his best, he is daring, courageous and adventurous, he takes risks and is full of energy. With all these characteristics, she makes her partner feel special with small details and manages to establish a level of empathy such that she learns which are cliché scenarios in which she can better satisfy her partner, such as a romantic dinner, outings to the movies, etc. .

Cancer women seek to establish a space for personal growth, intimacy, pleasure and tenderness, which is why the previous characteristic of Aries can be very attractive, but for both, the relationship can become suffocating with the passage of time, routine and stagnation, since Aries requires constant evolution and changes, while Cancer is committed to stability.

Although Cancer may notice a lack of clarity on an emotional level and will need a less exhausting and more stable domestic life, than what many Aries are capable of offering. They have good intimate relationship.

Cancer needs a commitment that many Aries can offer and is a much more emotional sign than Aries .

This means that for a long-term relationship to work, Aries must be prepared to move slowly and with sensitivity. Aries can be an ideal match for shy and cautious Cancerians, as it can encourage them to take initiative and motivate them to explore other possibilities.

In a serious relationship , Cancer should continually try to keep up with Aries and get used to the extremely fast pace of this fire sign, while Aries should do everything possible not to get bored next to Cancer. Cancerians are usually very demanding people – with themselves and with their partner.

Although both signs are cardinal and moving signs, indicating flexibility and movement in your life, Cancer is much more withdrawn and homey than Aries while Aries is more energetic and prone to making quick decisions. The continuous demands of Cancer can overwhelm Aries, who needs to go out and relate both in his professional life and in his personal life.

In the economic and labor sphere, this relationship can lead to the establishment of risky and high-yield investments, but the temperament of both can play against.

For the combination of love and work to work, it is necessary for Cancer to show prudence and restraint in some of its behaviors, allowing Aries to take care of important issues and decisions for the team.

Aries’ first love is work. For Cancer, work is complementary or secondary, so there is no greater competition between the two, although they have an unquestionable professional ethic that allows them a good level of personal development if they work together.

The skills and abilities of Aries can serve as a boost to their partner, while Cancer can provide empathy and soften the character of the ram, thus generating a good team.