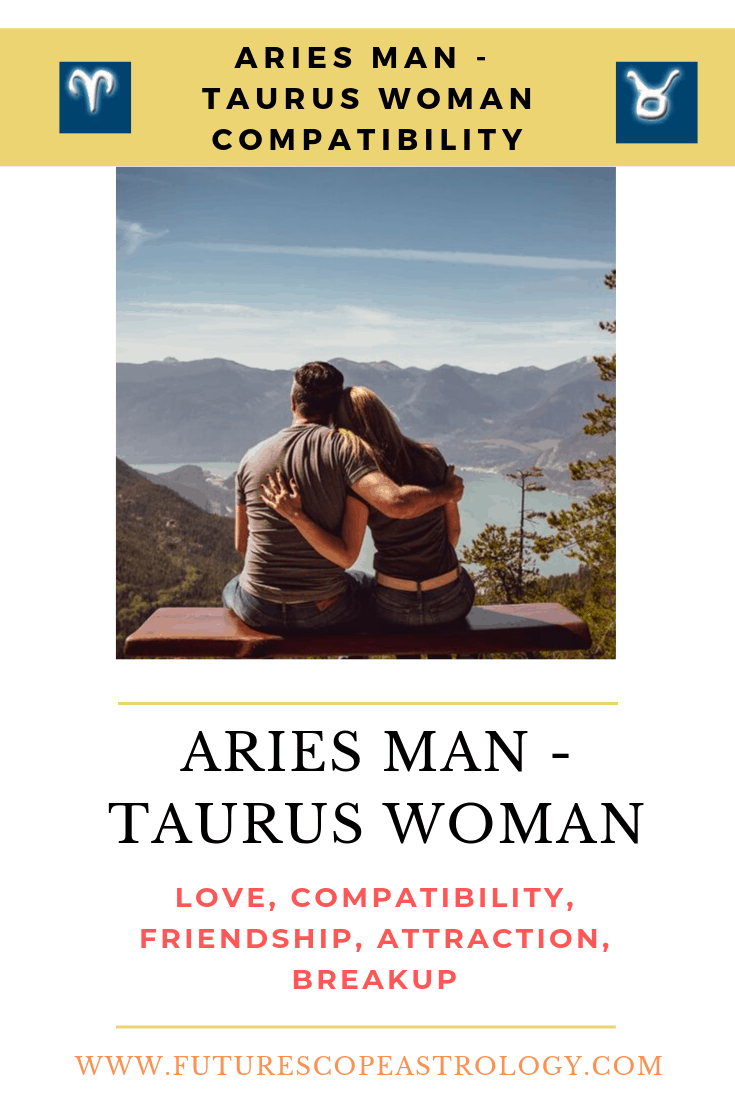 A love affair or marriage of this couple is more likely to succeed than an Aries woman and Taurus man relationship. Of course, this does not mean at all that their union will necessarily be completely peaceful, but there is hope. Passivity, stubbornness and calm perception of Taurus)are more natural when it comes to women.

Aggression, independence and power pressure of Aries are more inherent in a man. In any case, this pair may have fewer conflicts (combination of the Solar Signs 2-12).

Nevertheless, it is the intensity of the conflicts, and not their frequency, that disrupts any ties. So, work will be needed from both sides in such situations.

The Taurus woman often seems to the Aries man to be the one he must conquer. He does not understand this immediately, but only when she does not agree to follow his lead and destroys all his plans for seduction.

The Taurus woman can be so languid and gentle – it seems that she combines what the Aries man just lacks. Where he spends, she saves; where he hurries – she seems to hesitate on purpose; where he wants to finally break through the defense – she builds a tall wall.

Their relationship can be full of love if both understand that they want to be together and make concessions for each other. At the same time, the Taurus woman will become more open and less stubborn.

It is as if she will accept the Aries man, who, in turn, will become more patient, perhaps he will even learn to wait. And he will have to wait – the Taurus woman is one of those who harness for a really long time.

Their sex will be both tender and passionate: they both love sensual pleasures. The Taurus woman, however, prefers softer caresses, strokes, needs a rather long foreplay – like every woman.

And the Aries man is always trying to be fast, agile and bold – even in sex. If they manage to harmonize their rhythms, bring them to a common denominator, then their intimate life will be very, very rich.

Their marriage is very possible, because they both love to finish what they started. The desire for high material prosperity, which the Taurus woman demonstrates, is not entirely clear to the Aries man, however, he, like a man, tries to match it.

Their marriage union serves his development, becoming as a man – an adult and successful. She, having such a breadwinner and the head of the family, will forever remain satisfied with the standard of her life, including family life.

They will always be able to support each other: the Taurus woman and the Aries man have similar views on friendship and friendly relations.

She will help him regain strength after another battle, he will instill in her the confidence that everything will work out and there will be enough strength for any achievement.

It’s great if they have common sports hobbies: both love to feel their bodies.

Hiking in the forest, jogging together and long conversations about everything in the world – they will get real pleasure from communicating with each other.

The Taurus woman and the Aries man can realize all their wildest dreams in terms of business: he is initiative enough to give life to any project, and she can make this project profitable.

In this pair, he is a strategist, and she is a tactician: the Aries man plans very generally, while the Taurus woman thinks through and looks for methods by which the desired result will be achieved.

The only negative of such a business alliance is that they may lack ideas and inspiration. But for this, you can always turn to representatives of air signs.

Taurus begins to get nervous when her emotional and financial stability is at stake. In most other cases, it exudes peaceful calm, which serves as an excellent discharge for Aries. It is also very important in their relationship, since Aries is often capable of mental, emotional and physical breakdowns. (The Aries man will push until he falls.)

When one of the rare attacks of rage happens to a Taurus woman, her calm can be replaced by anger of volcanic proportions, and she forgets about all caution.

But this happens so rarely that it can hardly be a serious reason for the complication of their relationship, unless Aries is insane enough to insist on his victory in these infrequent but dangerous clashes. It is better to give in to him, for an attempt to win in this case is equivalent to an attempt to stop the earthquake.

Some astrological descriptions present the Taurus woman as a satisfied cow in the pasture, and this is simply offensive. What of the fact that she does not show strong feelings and will be the center of attention at the party? Its calm beauty is like a quiet lake in the depths of a pine forest in which lilies are fragrant.

The magnetism of Taurus strongly touches the strings of male hearts, because it promises an unusually calm and luxurious adventure, and the strings of Baran’s heart especially.

The Aries man soon discovers that this woman, who is so calm and balanced (it is these qualities he secretly wanted to see in himself), is able to fill his soul with the scent of fresh flowers, and his house with music of love and friendship, not to mention that she cooks great. In addition, she can give him joy and undisguised adoration for life.

She also knows how to save and save money. This girl does not stoop to petty reproaches, like mosquito bites. She is an exceptionally soulful woman and does not need a masquerade to prove it.

Love, ambition, honesty and the guarantee of financial stability – these are the four ways to her heart. An Aries man is able to provide the first three without any difficulty, but he will have to slightly change his lifestyle to meet her expectations associated with the latter. Aries’ income is often unstable, and this annoys the Taurus woman.