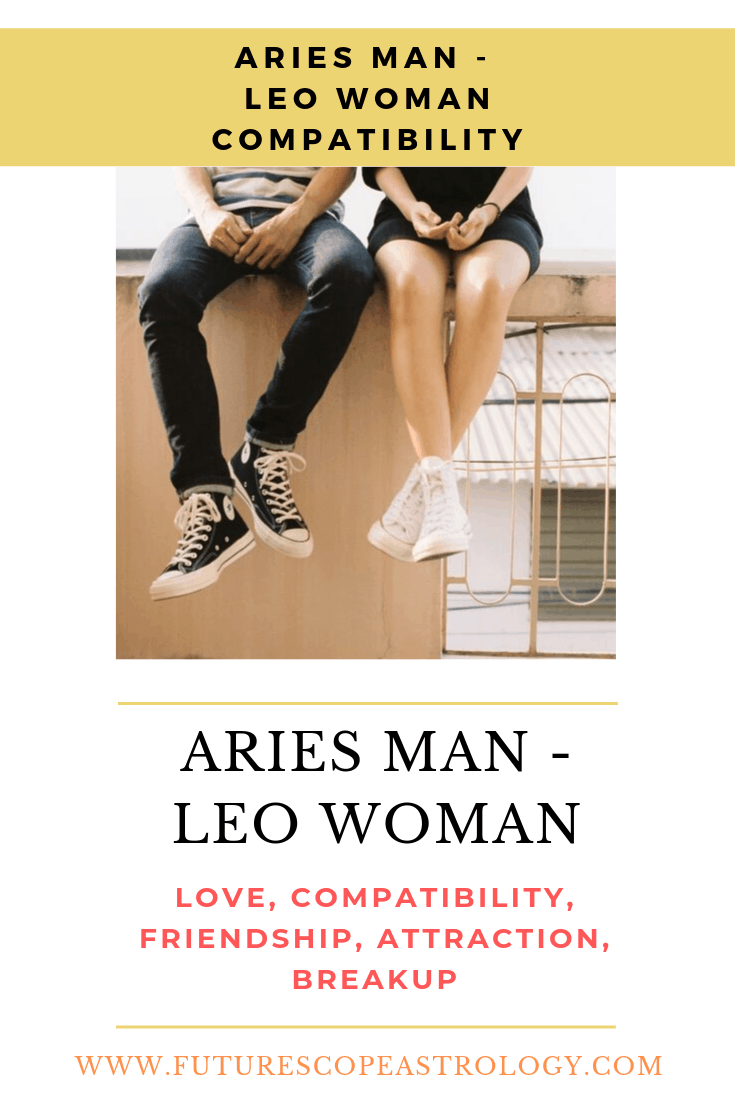 The immediate attraction between Aries and Leo is very strong and both Aries and Leo will grow up in each other’s company and will want to get to know their partner better on all levels, physically, mentally, emotionally and even spiritually.

Therefore, the compatibility between Aries and Leo is very high.

An Aries man can establish an intense relationship with a Leo woman, which is exciting for both of them. In the zodiac, this combination offers an excellent level of compatibility and they can achieve long relationships, almost effortlessly.

They are signs that learn to bond easily and have complementary aspects that keep them together in the long term.

The Leo woman is immensely attracted to Aries chivalry, as well as their faithfulness and sincerity, thus leaving almost no room for complications in daily life.

Neither sign is overly romantic as they find it unattractive and a waste of time. They share an impressive level of stubbornness, which makes them a very interesting couple, because their compatibility survives over time and does not go through stages of fluctuation as it does with other signs.

Both are signs of fire, which is why they are explosive and never come second. Consequently, their relationships with friends and intimacy are generous, full of gifts and attention to each other, always looking for mutual flattery.

The lioness charm can mitigate the intensity and volatility of Arian fire, causing endless passion to develop. When the male is Aries and the female is Leo, an ideal scenario is produced for both of them to let the gifts that their signs confer flow, otherwise than what happens when it comes to a Leo male and an Aries lady.

Despite the positive aspects, a great struggle of egos will eventually take place, an issue that must work as a team to counteract the negative effects that this astrological conformation can bring to daily life.

This is one of the best combinations when it comes to love and relationships. Fire feeds fire and this configuration implies a great commitment and a lot of passion.

These two signs are understood in an intuitive way, which is why they do not require many words to work as a team in daily tasks, they also have a similar sexual intensity and together they are romantic, generous and very devoted to their relationships.

They have a mixture of independence and warmth that allows them to fit in perfectly, and their competitiveness translates into being increasingly generous and dedicated, a “struggle” that is incredibly beneficial.

From the point of view of intimate relationship , it is an extremely compatible combination. Both signs will be willing to impose themselves by pleasing the other, so they will make sure to cover the deepest needs of their partner.

In the intimacy, they complement each other perfectly. The Leo woman cannot stand a boring and unsavory relationship and Aries is the living expression of passion in bed, always seeking to please and feeding on passion.

This is a fortunate combination when it comes to work and business. Leo has a creative mind and is always looking for expansion, as well as being visionary. Aries is enthusiastic and very optimistic, having the ability to carry out any kind of company, with the simple fact of having proposed it.

As both have the ability to stimulate each other and enhance their skills and qualities, with which a partnership between them would be very prosperous. Likewise, when it comes to working together, one can serve as a guide and complement to the other, as long as Leo does not try to interfere with Aries’ leadership goals.

It is necessary to remember that Aries is a fantastic leader, but that he does not work well with teamwork, and the lioness is stubborn and independent, so ideally, her way of working is complementary and not competitive so that a relationship is established. routine that flows properly.

The two should never be sharing the helm, as the results would be disastrous. They form a healthy balance, provided that each one learns to respect the other’s space.

Aries and Leo are the proudest signs of the zodiac and both like to dominate the situation. Hence, for this combination to work in the long term, the couple must be built on the basis of mutual respect, and with careful planning, so that both members of the couple have the opportunity to make decisions equally.

However, it may be impossible to avoid the clash of desires and attempts to dominate the other.

They achieve a wide level of intimacy, although at first, both are reluctant to establish a relationship that makes them prisoners of a long-term relationship. They can also become contradictory, because when they feel desires for a person, they can become possessive and dominant.

Both in friendship and in intimate relationships, the lioness is very loyal and Aries is independent. If cheating occurs between them, both will expose the worst part of themselves in the conflict, leaving deep scars that can make a reconciliation impossible.

The adventurous spirit is not a problem for them, because they both share the same needs. They also share a hypersensitivity to criticism, which can be positive or negative depending on the situation.

When you know each other well, both of you can avoid harsh criticism to avoid being taken as a provocation by the other, avoiding friction.

A couple of these signs can get along excellent while everything is going well, but get into intense conflict when things go wrong, generating bitterness and friction, a matter from which it will be very difficult for them to recover if it happens too often.

The most compatible Leo for this combination are those born between August 13 and 23, because this period is ruled by Aries and, in this way, both members of the couple will be reflected in the other.