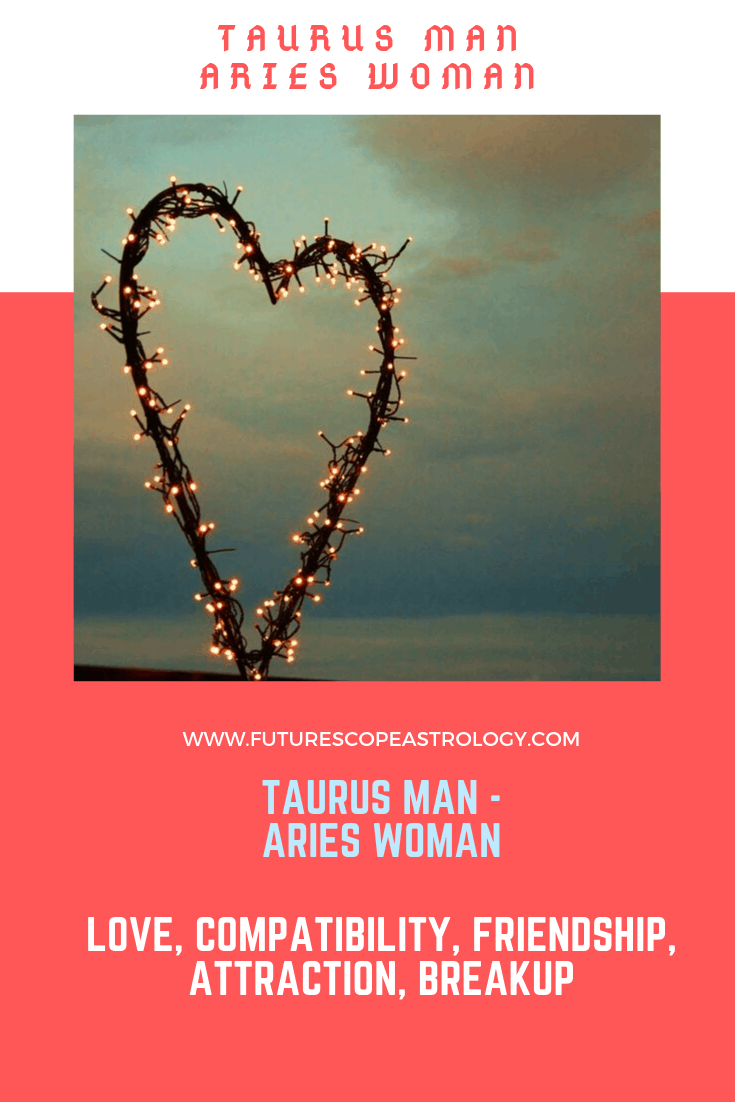 The compatibility between Aries and Taurus is very good . Taurus an Earth sign, while Aries is a Fire sign, so the relationships between these two signs are usually centered generally on the financial and materialistic aspect of life.

This encounter produces sparks from the first moment. These signs are usually compatible in many aspects of daily life, including in bed, something of great importance to both. Passion and intense connection in everything related to sexuality will be key for the relationship to last over time.

They complement each other in such a way that they are able to understand the innate strength of their opposite and avoid conflict when it seems imminent.

Thus, the couple manages to calm the tide and break any moment of tension when necessary, managing to put their similarities ahead of their differences. Without a doubt, an advantage for the development of a relationship.

They are both stubborn and unwilling to always compromise. Both are persistent and put a bit of pressure on situations, which is why this couple remains in a resistance struggle that is usually stimulating for both parties, as long as they manage to reach agreements and overlap mutual interests.

Also, neither of the two signs is sticky. They love freedom and also allow others around them to enjoy that same freedom.

Aries seeks thrills and adventure, while Taurus prefers to relax enjoying the comfort acquired as a result of their own efforts. They are two complementary interests that make this relationship very good.

When it comes to more intimate relationships, Taurus is a devoted and loving lover who completely breaks through his hard surface to show his most sensitive and vulnerable side in intimacy.

Aries is somewhat possessive, but is responsible for setting the funny tone to each situation, lifting the spirits and serving as a support to dispel bullish pessimism. The passion between these signs is somewhat evident from the outside.

Aries is explosive, but Taurus is slow-burning, so they complement each other perfectly.

In relationship, both expose their weaknesses and desires for freedom, since they are giving themselves to the person they trust the most.

Thanks to the influence of Mars and Venus in these two signs, this combination usually has very passionate intimate relationship .

There is a natural attraction between the two, something that will probably become apparent as soon as they meet. The impulsiveness and passion of Aries combines very well with the sensuality and desire for love and warmth of Taurus.

These are two zodiacal signs that are highly compatible on the sexual issue. In bed, the Taurus man loves the Aries woman taking the initiative and she is fascinated by the Taurus momentum, as well as his passionate nature, his ability to lead situations until he turns routine into something extraordinary.

Paradox: despite the fact that in love with the Taurus man and the Aries woman, everything develops enchantingly and harmoniously, their compatibility in marriage quite low.

As a family, these two zodiac signs experience a number of difficulties, and it often turns out that the claims come from Aries Woman. And the Taurus Man, although he is stubborn and hardly compromises, makes every effort to maintain the relationship.

It is better for the Taurus man to give in to his companion even when she wishes to understand the essence of the conflict that has arisen, without postponing it for later. And she needs to reduce her harshness and show restraint.

Taurus easily copes with the role of a father who tries to give children everything and in full. He spoils children, does given then a lot of attention and care.

As for the Aries woman, she also loves her children, acting as their protector and helper throughout her life. However, parents should not lose sight of the fact that excessive care can harm future offspring who are not accustomed to independence.

When it comes to friendship, Taurus Man is slow, but consistent. Being an introvert, he is more open with friends with whom he has greater affinity and closeness.

However, he does not close himself to new friends, much less if it is an Aries, whose enigmatic character is particularly charming. These signs have the facility to become accomplices.

When they earn each other’s trust, they can both expect an impressive level of loyalty. They will be willing to give everything for their friend, helping when they go through the most difficult situations.

The downside is that they have slightly different interests, so they very few common activities.

With regard to these two working together, there is not much that can be said.

It is well known that they are two signs characterized by being tireless workers, with the ability to carry out any project they have in hand and a great ability to learn as they go, regardless of the size of the challenge that is presented to them.

In addition, they both know how to follow orders and work based on a leadership structure. They are not used to shortcuts, so they bravely undertake hard work and know how to fulfill their individual duties for the collective benefit.

Working as a team there is a great chance that they will achieve great things, both professionally and in business.

What can become a cause of conflict in this employment relationship is that both signs have enormous potential for leadership and, therefore, both will seek to take control of situations.

If both are in a subordinate position there would not be too much problem, but if it is a competition that leads to a rise for one, the picture changes.

In a relationship, friendship or work, Taurus and Aries are moderately compatible.

Working together, it would be very strange for one to have a complaint about the other’s work, beyond differences of ideas or concepts.

Honesty and Trust is the basis of the relationship between the two. Being a value that they highly appreciate, they tend to be direct about their needs, concerns and try to quickly solve any misunderstandings.

This fixed quality of both allows them to be a great duo within work teams that require quick actions and frequent decision making.

Both are powerful signs, but they do not take competition as a struggle but as an incentive for their personal improvement. They find their competitors as the perfect tool to learn, detect their weaknesses and overcome them every day.