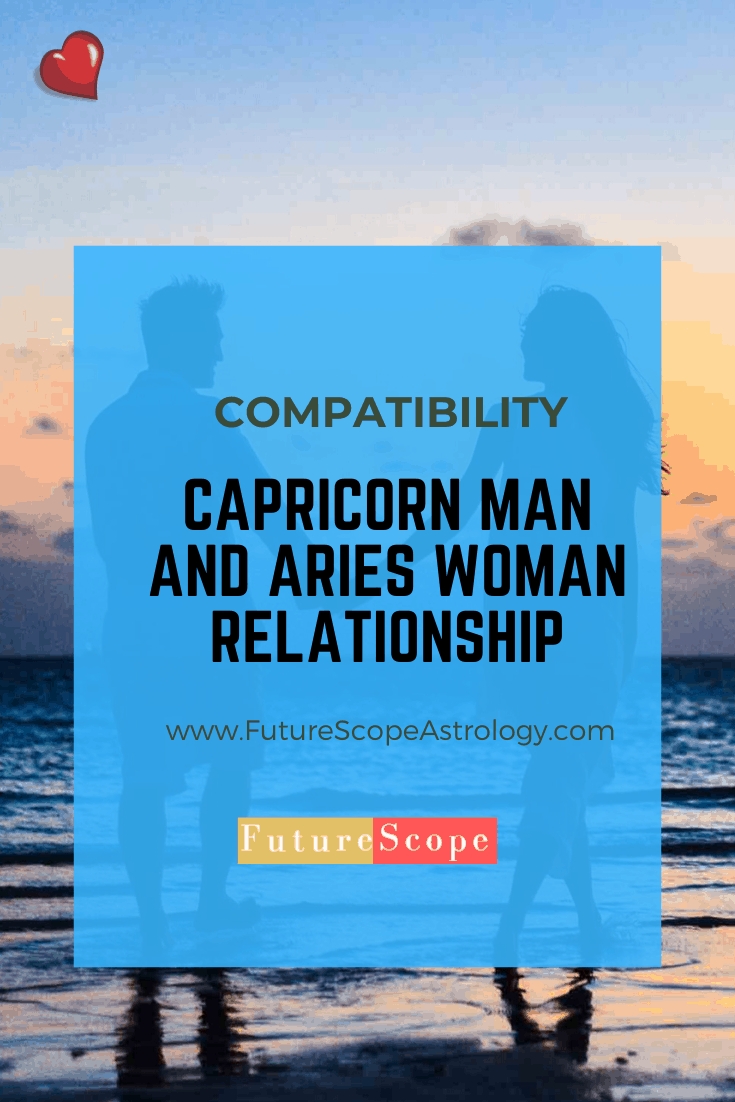 Aries Man and Capricorn Woman is a very complicated combination and its degree of compatibility is low . Both signs will have to do a lot of their part for the relationship to work, due to their enormous differences between their characters. Ruling planet of Aries Mars and that is Capricorn is Saturn. Mars and Saturn are the forces which are completely different.

On the one hand, Aries always aspire to give their best and have fun at the same time, facing everything that gets in their way. On the other hand, Capricorns are highly competitive when they aspire to a particular achievement and put all their attention on it, obtaining the status that their ambition aspires to.

Both are titans with a tendency to live in disagreement, but despite this they do not fight only to face others. If the Capricorn man, characterized by being disciplined and calm, wants to win the heart an Aries woman, he must prepare well to face this enormous energy.

To do this, perseverance and focus will be key in achieving this challenge, and with this he can win the most ardent relationship one can find in life.

Initially, in intimacy , the combination also has its difficulties. While Aries likes to experiment and is daring, Capricorn is much more conservative and finds it more difficult to let go.

Both signs will need to be committed and have patience to have satisfactory intimate relationships. Once they establish the trust with each other, their intimate life will be very satisfying.

The intimate relationships between a Capricorn and an Aries will always be catalyzed through the great force of physical relationship. It is there that both achieve the meeting of their most similar aspect despite the great distance between their personalities.

The sexual behavior of a Capricorn is totally contrary to his external image, being just as passionate and intense as Aries would be.  In this case, the characteristics of both signs add up and enhance, satisfying each other, and helping to dissolve disagreements originating in other areas.

Capricorn men are characterized by being reserved and calm, with a circle of select friends since it is not easy for them to become friends. Once achieved, it is maintained based on high moral and honesty values, which must be strictly adhered to so that friendship is maintained. A Capricorn man is supportive and loyal with his true friends, being able to count on him unrestrictedly in a time of need.

On the contrary, Arian women are completely open to all types of people, accepting and respecting them with their differences, just as they are, so they do not reject those who do not think or act like them.

Since they love to have fun, they respect everyone as long as they do the same with them. Their leadership capacity makes them protective of their friends and they will establish the strongest fight to defend them, without taking into account the time and effort that are necessary for it.

The Aries women have the clear ability to differentiate work from play. They do not tolerate slips of this type during work hours. Their spirit guides them to aspire to be the best in their performance. They will put all their energy and determination into it. Like Aries, Capricorn men are also focused on excellence at work, and they don’t accept being second-best.

If they must work together, the two will have to face each other and compete. But because they are highly trustworthy and honest, their bosses can be sure of having a staff fully dedicated to achieving success. Aries like to feel useful with their peers, and they are friendly in their work environment. Capricorns tend to be condescending, feeling more competent than their other co-workers.

The frictions between the two signs are often derived from the struggle of Capricorn men for the lack of discipline and the desire for adventure typical of Aries; and the success of a relationship carried on peacefully between the two will depend on their ability to adapt to each other.

A Capricorn will always be of a frontal honesty, even if this hurts the other. Sometimes, the dark side of Capricorn is manifested by a superiority where he thinks he knows everything and becomes annoyed if he is contradicted.

Relationship of a Capricorn man with an Aries woman is a challenge that not everyone is capable of. It is a relationship in which differences must be appreciated and valued. A balance found between the stern and responsible Capricorn man and the irresistible and passionate Aries.

This will make Capricorn Man become a more fun person, while he manages to make her more controlled . It is not an easy task, since both will face their strong wills. But it is well worth working towards a harmonious and happy ending, respecting and appreciating the differences between them.

Capricorns born between January 2 and 10 are the most compatible for this combination. This is due to the presence of Venus, it is easier for them to be affectionate and express their feelings and Aries born between April 10 and 20 have greater possibilities compatibility with Capricorn. However, it is a very difficult combination of signs.