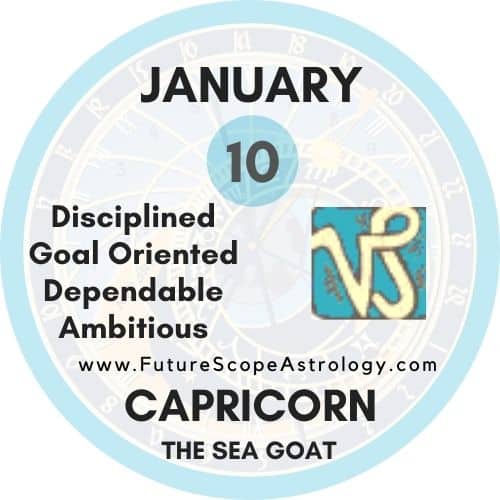 Is your Birthday on January 10 ? Know the Sun Sign, Personality, Compatibility and more….

For People born on January 10, the Zodiac sign is Capricorn. Capricorn is an earth sign. Capricorns are hard working and have good patience. They can be stubborn at times.

Traits of a person born on January 10

On this day, kind, sincere, independent, courageous people are born. They are hardworking, they know what they want. They have developed intuition. Their ability to predict helps them to be always afloat and successfully conduct business, avoiding unpleasant situations and losses.

Based on the support of their relatives and friends, these people are stubbornly moving forward, making progress in their career advancement. They usually achieve excellent results, creating excellent conditions for themselves, surrounding themselves with luxury and comfort.

Those born on 10 January are realists to the core. They are able to take a sober look at any situation, evaluate it and act accordingly. They seldom become victims of false optimism, unfulfilled hopes and ideas. They always really value their capabilities.

No matter how sensitive they are, those born on January 10 never allow their weakness to stand in the way of achieving their intended goal. Uncompromising in their assessments, they are by no means striving to sweeten the pill or embellish reality.

They present facts as they are. In this sense, those born on January 10 are often blamed for stubbornness and lack of diplomacy, but very rarely for dishonesty.

Even their opponents are forced to admit that those born on January 10 are alien to double standards – their exactingness extends not only to those around them, but also on them.

Not necessarily analysts or critics born on January 10 are more likely to provoke conflicts with others by their directness and uncompromising attitude.

In fact, they are not at all afraid to express a judgment that is different from the generally accepted one, to behave in accordance with their own convictions. However, these people can hardly be called exhibitionists.

Some, on the contrary, prefer to remain silent, but even in this silence, many feel no less power than in a sharply worded phrase.

Those born on 10 January they do not aspire to become leaders, they are quite happy with their backstage position, but at the same time they should still control the situation.

In a personal battle, they are not eager to be the first to join the battle. But if the situation is such that standing up for themselves is a matter of honor, those born on that day will be able to strike the enemy skillfully.

In case of defeat, they, do not show their suffering and torment, preferring to hide the insult deeply in themselves. It seems that those born on January 10 are hard to surprise with anything, they live as if ready for anything.

Nevertheless, they still have vulnerabilities. Like everyone, they need recognition and admiration from others. True, they do not demonstrate a pronounced desire for this. Respect is another matter. Respect they require, and demand.

One weak spot of those born on January 10 is – they turn out to be quite thin-skinned when they begin to compare them with others. For example, when praising an opponent, they can find their Achilles heel. In this sense, it’s better for them to turn everything into a joke and quickly forget.

It seems that those born on January 10 are hard to surprise with anything, they live as if they are ready for anything.

Those born on 10 January are difficult to conquer in love because they are very shy and hesitant in love, despite always appearing strong and decisive. They might seem cold , and not very interested in love, but in reality, even if they are not lovey dovey, they have great feelings.

People with January 10 Birthday have Capricorn Sun Sign. Click here to check the compatibility of Capricorn with various other Zodiac Signs.

Those born 10 January tend to create health problems for themselves because of their excessive perseverance and realism. They can suffer from their own inflexibility – both physically and psychologically.

It is vital for them to remain open and sensitive, not to be afraid of the manifestation of feelings and emotions. For people born 10 January, it is more beneficial to have light and joyful emotions than heavy and gloomy thoughts.

Particular attention should be paid to arranging your own home, filling it with light and warmth.

Regarding physical exercises, those born on January 10 prefer athletic sports, but they should also look at other forms of physical activity, such as yoga, tai chi or zumba.

Advice for People Born on January 10

Be open to the pleasures of life. Learn to be light and jovial. Sometimes it’s useful to transfer to the back seat and just enjoy the ride.

Garnet is the birthstone for those born on 10 January.

Garnet, the birthstone for January 10, has been used for centuries in jewelry and other decorative items. While many people know about the gemstone’s beauty, they may not be aware of the other benefits that garnet provides.