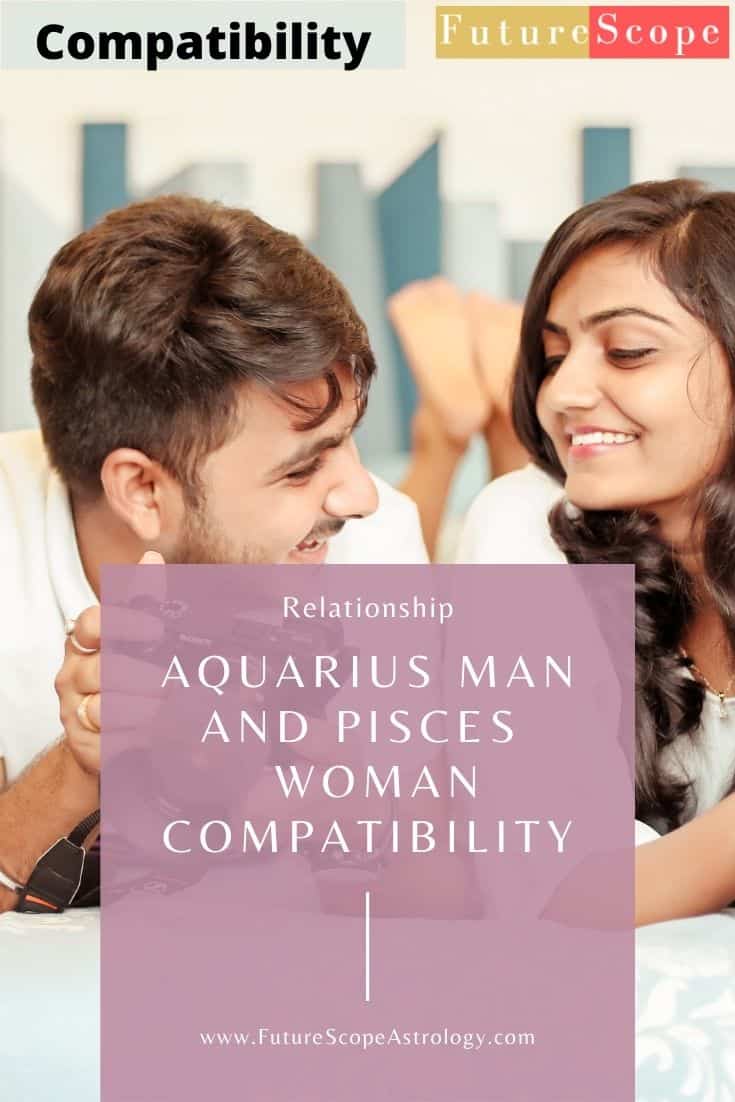 The compatibility between Pisces and Aquarius is not very high

These two signs of the zodiac there is a good karmic bond to start building a relationship. At first, they may feel like they are an oddly different couple due to their highly volatile personalities.

He is a distant philosopher and she is an emotional romantic. She wants security, while he is very retired.

Having a common approach to the universe and a sense of detachment can reach an energetic bond where the Aquarius man and the Pisces woman manage to end up bringing out the best in each other.

Aquarians are extremely happy people who are often lost in their own thoughts about their role in society.

This dreamer is full of ideas of how he can improve the world and make it a safer place. He defines himself by these ideals. He aspires to connect with others who have the same ideal as him.

These signs appear to be dazed and distracted, the Aquarius man respects above all loyalty to the people around him, becoming a loyal partner.

He is afraid of making a hasty commitment as they take time to make decisions that influence his emotional life, but, once he has chosen a woman, he will safeguard his love and be faithful to her until the end. He is enormously trustworthy with his feelings.

Once an Aquarius man has set his mind to something, he will keep his promises.

Every woman is sensitive and instinctive, but the Pisces woman goes further. She sees the world with a bit of naivety always observing the best in everything.

Her listening quality allows her to be receptive to new ideas and knowledge, even if they are a bit exotic or unconventional.

They are very empathetic, they are often deeply affected by the feelings and moods of those around them, affecting their daily life and social relationships.

One of the Piscean qualities is being able to adapt and use all your potential to excel.

She longs for a very confident partner that she can believe in and be inspired by. Looking to get a deep connection with her romantic partner that makes her feel safe.

But this is not all Pisces also requires a man who can understand his independent nature and his need for solitude as an individual.

Pisces is the most flexible sign and your ability to intuit will be essential for this combination to be successful in the long term .

In this sense, you will have to learn to trust Aquarius and not feel rejected when Aquarius performs activities alone or in the company of others.

While Aquarius needs some freedom to feel comfortable in a relationship, Pisces enjoys the presence of her partner so much that it is difficult for her not to consider the Aquarian way of being as a rejection

However, the more time you spend together, the more likely you are to enjoy a long-term relationship.

They are the last two signs of the Zodiac and as such, they represent the accumulated experiences of all the signs, which are placed before them.

The Aquarian man, by his very nature of being cautious, and Pisces, because of his affinity with feelings, usually have confrontations in intimacy, although these disagreements can be solved with talk and time to get to know each other.

Being the most independent sign Aquarius, he becomes very quiet about his feelings, and this is usually reflected in his sexual life, while at the same time he inhibits himself in the process to open up, taking a little longer than usual, reaching the point that it seems a being without emotions.

Many times these attitudes lead him to a dead end, making him a subject of continuous discussion between the two, unlike Pisces who puts his feelings first.

To solve this problem, the Pisces women must be the Venus de Milo of the aquarium, helping him to feel confident and free himself from those voices in his head that prevent him from loosening up and having intimacy, she has to use her great auditory potential to achieve that sexual connection that so much yearns for aquarium, having in his favor the patience and tranquility that he possesses.

For these two worthy ones, the little things in life have a great impact on their relationship since it is not the big problems that explode but the straw that breaks the camel’s back.

Aquarians tend to plan their large projects leaving aside the daily tasks that, although not very important, are accumulated to the point of forgetting to pay the utility bills.

For his part, Pisces is navigating his own thoughts and this can make him forget about housework.

The family project is the integration of two personal missions to become one, and this can transform into anarchy.

The Aquarian man and the Piscean woman want to delight in their coincidence in other functions, so they have to find a way to share the basic functions of a family nucleus to have peace of mind as a couple.

Aquarius leads with his reasoning and Pisces with the emotions of his heart. Just as a balance is balanced, they can create a symbiosis with each other by solidifying a pair correlation.

His sentimentality keeps his feet on the ground, preventing him from getting lost in his own thoughts. In turn, he gives her that security of stability that she needs.

Both are coupled to establish a strongly secured nucleus without implying the need to depend on each other without taking away their freedom as individuals.