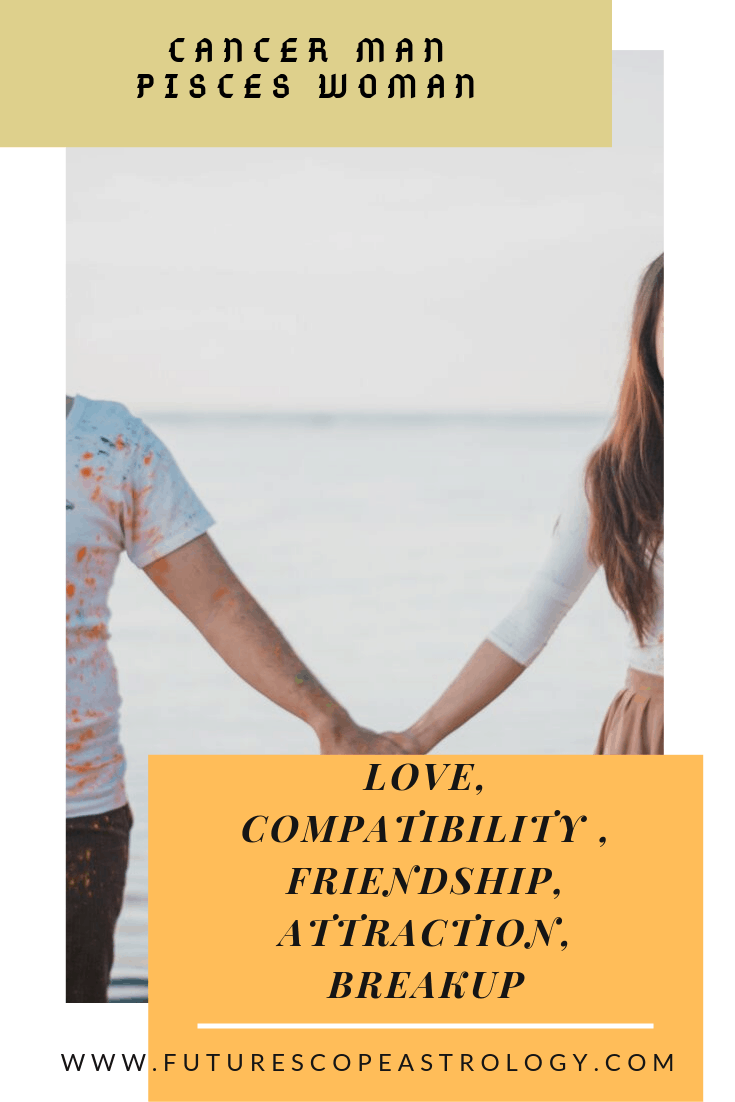 Pisces and Cancer have a lot in common, especially when it comes to emotional compatibility. Both signs instinctively understand each other and feel the needs of the other. Both are loving and supportive of their partner.

The compatibility between Pisces and Cancerians is very great. Such a good relationship is due to the fact that both signs are water, which is why they can flow harmoniously as a couple.

But it is also due to the fact that both signs guide their action through deep and significant emotions and find in their spouse and family their reason for to be.

For these reasons, their relationship is not very problematic with low conflict and high communication and understanding. The Cancer man finds in the Pisces woman someone who can understand him and who shares his goals and conceptions of life.

It is a healthy relationship if there is respect and assertive communication.

As for intimate relationships, there is no better combination than Cancer and Pisces. Both value above all things the emotional connection which is why there is no sexual act as truly intimate as those that take place between a Cancer man and a Pisces woman.

They are almost soul mates even more compatible than the relationships between Pisces-Pisces and Cancer-Cancer, since Cancer’s volatile character is tempered by Pisces’ calm and understanding. Sex is not a matter of mere fun for both of us, it is a time for deep and transcendental encounter and connection.

Romance is at the center of their relationship on a daily basis, which is why they can have a beautiful and healthy coexistence.

Intimate relationships between Cancer and Pisces are usually excellent, given that both are strongly attracted to each other, understand each other’s sexual needs, and do their best to satisfy them.

Pisces empathy is their most beautiful quality. Pisces women offer all their loved ones a shoulder on which they can confidently vent.

For this reason, among all the relationships that these usually establish, beautiful friendships often arise in which Pisces acts as an engine and incomparable support.

Pisces lives to help others just like Cancer, and we can even say that this dedication is deeper and more meaningful in Pisces. This quality leads her to have a pleasant personality, almost impossible to detest.

The Cancerians, for their part, are much less introverted than the beautiful Pisces, but they also share their vocation of service and dedication.

Cancer men may also be much more suspicious than dreaming Pisces, but both are happy helping and collaborating with others, especially if they manage to generate significant spiritual growth in them. Cancer’s compatibility with Pisces is also evident in its determination.

When it is the Cancer’s turn to defend their loved ones, they momentarily suspend their friendly face and with great determination make them respect what they deeply value.

This is suitable for Pisceans because they are sometimes somewhat docile with those who take advantage of them.

At the work level, the complementarity between Pisces and Cancer is great. Pisces is shy and introverted, but she is also a perfectionist and efficient, which is why it is relatively easy for them to get important positions within an organization.

As Pisces is susceptible to criticism and conflicting relationships, there is no better partner than Cancer to support her when she has a great responsibility on her back.

Pisces earns the admiration of her peers but in the same way she can also earn rivals at work who fail to assimilate the admiration many feel for her.

In the face of Pisces’ naivety, Cancer’s mistrust comes as the ideal counterpart. Cancer men can prevent them from taking advantage of Pisces, which happens quite frequently.

Now, for their part, Cancer men are also tenacious workers and are very focused on supporting all members of a team. He does not like to assume leadership positions because he prefers the safe and predictable.

He tends to be more structured and suspicious than the rest of his peers but also more helpful. There is no one who likes to be more supportive than Cancer. Support and realism, are the two main qualities of Cancer and are just what Pisces needs to progress professionally and personally.

The only flaw that should be mentioned is Cancer’s abrupt mood swings. It is necessary that he learn to control himself so as not to hurt the susceptibility of Pisces.

It is a great challenge for Cancer whose only flaw is the most difficult to modify, but it is worth it to maintain a relationship as intimate and significant as this.

One of the dangers of such similarity is that both can change their minds and direction with ease. In order for a relationship to thrive and grow stronger, both signs must strive to avoid excessive sentimentality and give your life a joint direction.

Cancer is a highly variable sign of humor, and can sometimes hold a grudge. Pisces may also have some mood swings, but they are better forgiving and manage to forget slight insults and misunderstandings much more easily, which is positive for the relationship.

The only challenge to overcome, as already mentioned, is that Cancer must lessen its tendency towards conflict and angry responses. In such cases, anger-guided responses can lead to Pisces being hurt.

These damages can be so significant that they completely ruin the relationship, making it, one of the most ideal relationships existing, totally unfeasible in the future.

It is no surprise to anyone that these two signs get along wonderfully. The similarities between one and the other are enormous and between them a synergy is created without comparison.

There is a kind of natural balance that is created between Cancer men and Pisces women as a result of the tendency that both present towards understanding the feelings of the other. They are ideal to face all kinds of difficulties both in the workplace and in the domestic space and their private lives.

The company of a Pisces or a Cancer is perfect to live calmly and optimistically in the future. Both of them offer security and refuge from the vicissitudes of everyday life.

The only problem with this similarity is that, being excessive in some cases, it may be more a cause of competition and conflict than of harmony. This is unlikely but that scenario should not be ruled out.

In any case, both Cancer and Pisces tend little to conflict and if they arise (especially by Cancer) it can be negotiated and overcome with some ease.