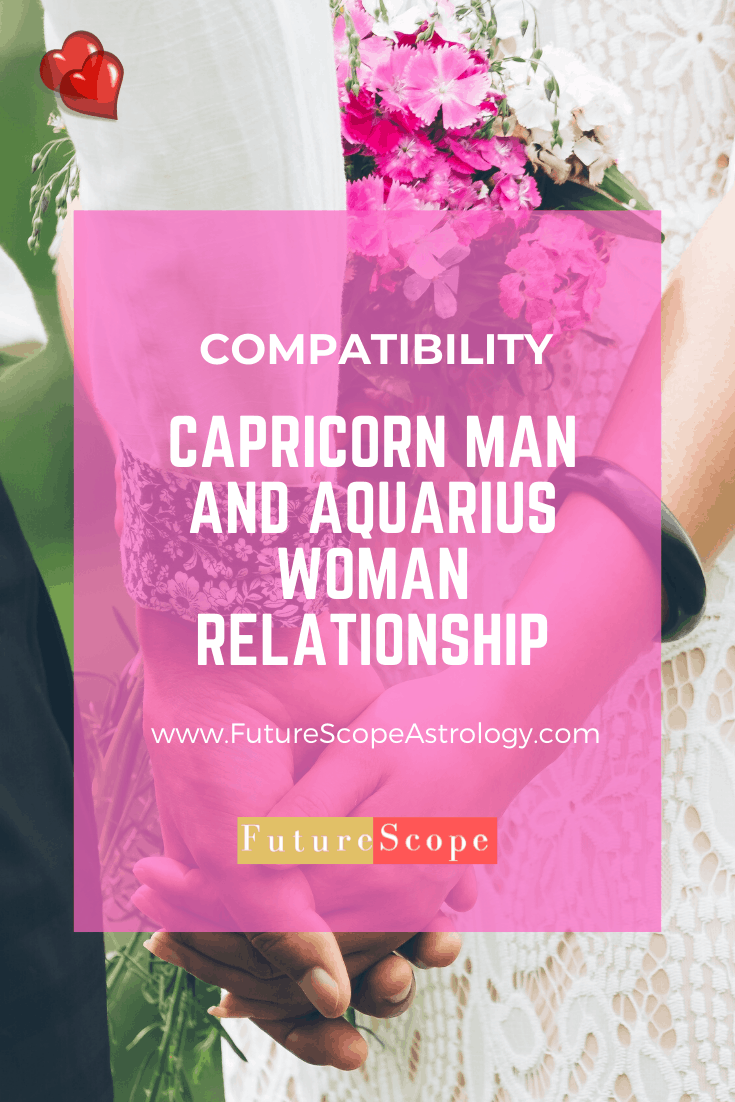 The compatibility between Capricorn and Aquarius is in the range of medium to high.

If the two of you manage to make the important differences that exist between them, they become a positive point for the couple.

If not, the relationship will be very stormy and it is likely that far from complementing each other, the two will end up completely exhausted

If you want to see the living representation of a true society, the best example is the one established between an Aquarius and a Capricorn.

The coordination between them is much more harmonious than one might imagine and, although this relationship is not always about fun and games, both members of the couple are usually prepared to work on a relationship that works well.

Between Capricorn and Aquarius, romantic relationships can be the most complicated. This is due to the tendency of Aquarian women to be unconventional, which could be directly confronted with the definition of a Capricorn man, which is their need for stability.

This weakness can be overcome if a good cohabitation agreement is reached, in which each member of the couple proactively takes care of the relationship.

In this sense, the Capricorn must overcome his instinct for possession and to set the tone in the relationship, while the Aquarian must pay more attention to her partner, so as not to give the impression that she ignores him.

Regarding their intimate life , in order to achieve high compatibility in their intimate relationships, both signs will have to take into account the very different characteristics of each other.

Capricorn has a rather traditional approach to sex, while many Aquarians like to experiment.

The friendly relations between these two apparently disparate signs can become harmonious if they balance and alternate the innate spontaneity of one with the need for prior programming of the other.

If each of the two is able to respect what defines the other, establishing limits that offer comfort in both directions, success will make your friendship last.

The characteristics of both signs favor business relationships between them.

The strength of Capricorn as a partner contributes to the security of the business plan, while the capacity for risk will lead the Aquarius counterpart to explore outside the conventional and take the businesses to new planes of expansion.

Using these same distinctive traits, Aquarius could easily take responsibility for the growth, social positioning and strategic networking of the business, while Capricorn dedicates itself to the more rigid aspects, related to the establishment of contracts and the work of negotiation.

The weak point of this combination is the tendency for both signs to participate and get involved in a multitude of activities, which can distance them.

It can lead them to spend little time in their relationship, which can cool the relationship and turn it into one devoid of emotion, romance and love.

By having such different positions in life, a head-on clash between the two could arise, but this is not an obstacle for not establishing a relationship between an Aquarius and a Capricorn, managing to agree to fix things.

By taking a look at the ruling planets of each of the two signs, it can be seen that a Capricorn man and an Aquarian woman may be much more compatible than they first appear.

Capricorn must learn to respect the constant need for improvisation that Aquarius has to change plans, open social gaps and initiate research on new topics.

For its part, Aquarius requires respecting Capricorn’s tendency to plan in advance and anticipate what may happen later. In the end, decisions about respect and tolerance for accepting the characteristics of the couple must be made at the full will of both parties.

The Capricorn-Aquarius relationship thrives on frequent review and discussion about how they evolve as a couple. Since you both have different views on how to approach life, you should try to review your relationship from time to time to make sure it stays on the right track.

It is always better to tackle differences in the beginning and discuss a possible solution, than to let problems get complicated and resentments can be generated.