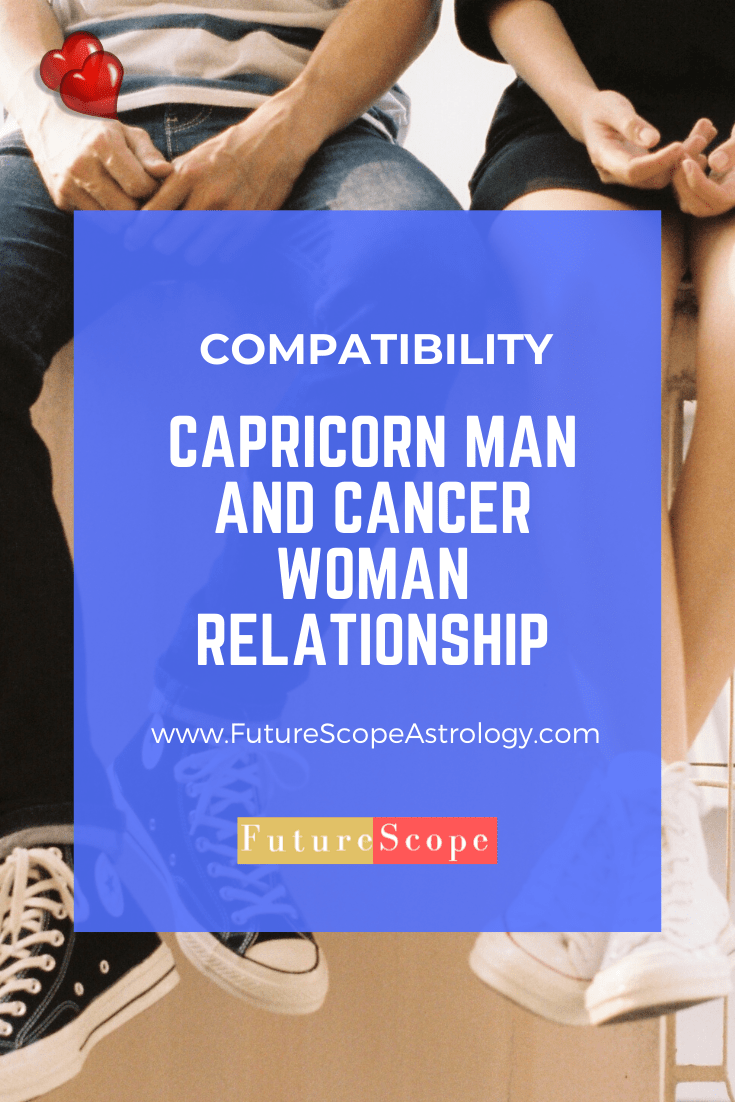 While Cancerians are loving and expressive, Capricorns have a hard time expressing their feelings.

One of the biggest surprises that the zodiac has in store for us is the union between a Capricorn and a Cancer woman. At first glance, a sign characterized by emotion such as Cancer does not seem to have anything in common with the practical and distant Capricorn men.

But this approach is based precisely on the compensations that each member of this couple offers to the other, reinforcing the common values ​​that unite them, such as love and family unity, mutual loyalty and devotion to their own.

It may take a long time to make this relationship work, but afterwards it is worth it and it will give great satisfaction.

The relationships that are established in a solid way between a Capricorn and a Cancer will be solid and lasting, since in both a feeling and respect for the other member of the couple will rule.

The true strength in understanding the relationship between a Capricorn man and a Cancer woman is expressed in their intimate relationships, as both aspire to the best with their soul mate.

The sentimental Cancerian will be greatly gratified by the emotional surrender that the sober Capricorn can provide, once he has surrendered to her feet. The Capricorn, in turn, will enjoy a relationship in which he can emphasize his command and express himself sentimentally to a partner who will understand and support him.

In the Capricorn man, a passionate sexual drive is also manifested, which the Cancer woman is able to satisfy, both physically and emotionally, while she is guided by his strength and self-control, making her feel loved and diluting her insecurities.

A relationship between a Capricorn man and a Cancer woman can be very successful if this balance can be established between them.

Sexually and emotionally it is a rather complicated combination, since Cancerians, sensitive and emotional, need more than the contained affection that Capricorn offers them.

It’s not that they don’t want to offer more; they probably don’t know how to do it. For the relationship to progress, it is important for Cancer to teach you and for Capricorn to be willing to learn.

Relationships between young Cancerians and older Capricorns are quite common.

Like Capricorns, Cancer women can be somewhat shy and introverted, despite which they easily establish great bonds of friendship.

By their very emotional nature, they take great care of their friends and affections, being well appreciated by them, but sometimes even allowing themselves to be manipulated.

They form strong family ties in their home and family, being their fundamental support in adverse times. Cancer women place so much importance on the family that they require its approval to establish true permanent ties with a partner or friends.

Unlike them, Capricorn men do not find it easy to make friends, due to their moral rigidity and reserved character, but once the goal is achieved and passed the test of blood and fire, they are loyal and committed friends, as long as you maintain your moral precepts and don’t break their trust.

Men of the Capricorn sign usually show themselves as workaholics, as they put it ahead of anything or person, in order to achieve the ambition of being the best professionals, which leads them to an intense dedication to achieve their goals, being able to hurt a sensitive woman, like Cancer.

For their part, Cancer women are good workers, very involved as long as the work coincides with what they consider essential for them. They are particularly prominent in professions that involve caring and caring for those around them, and when this occurs, they are as strict and perfectionist with their work as Capricorns.

In what if both signs are contrary, it is that the Capricorn performs better working alone, while she excels in teamwork.

As they are of such opposite characters, they have very different styles to work, so they are not the best combination to work together, and when confrontations occur between the two for work, Capricorns can be hurtful with a Cancer woman, due to their intransigence in matters labor.

Even being polar opposites, where a large number of personality characteristics are in opposition, a Capricorn man and a Cancer woman can manage to stay well matched in many ways, if they discover the characteristics they share, as well as those that complement each other.

Both show an important value of loyalty and care towards the family, which represents a fundamental point of union between them.

The relationship between a Capricorn and a Cancer may not be very easy to establish at first, until the Capricorn does not define his feelings and is able to express them.

Regardless of whether it is a great passion or a simple friendship relationship, the interaction between these two signs is well worth it, generating deep and satisfying ties for both of you.