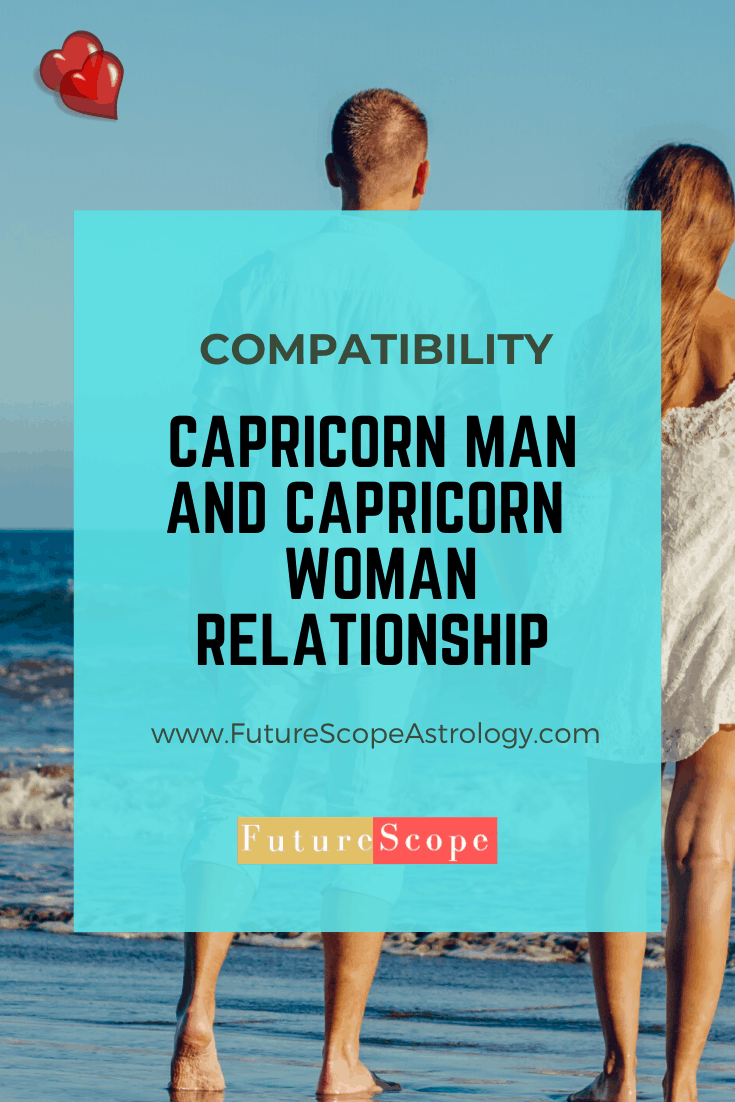 This can be a very compatible combination , but you could also suffer from the ‘too good’ syndrome. If the two of you have enough different interests to avoid falling into a rut and maintain a healthy balance of power, it could be a very happy relationship.

When both a Capricorn man and woman interact, they try to find a bond strong enough to hold permanently, as they seek stability.

The characteristics that both share are the amalgam to form a good bond.

Capricorns tend to suffer in their interaction with many other signs due to their exaggerated seriousness and their eagerness to work, which robs them of time to dedicate to recreation and rest that are essential for other signs.

Their particular qualities, such as mutual loyalty, their management and decision-making capacity to always face their commitments, as well as their love for the family and the cultivation of traditions, make them fulfill the goals they set out to achieve together; And they do!

In the section corresponding to intimate relationships, it is where the two Capricorns will obtain some of their greatest satisfactions, since both express themselves to the maximum in this sense, due to their great sexual appetite.

The two also share a devotion to family tradition, establishing indelible and intimate bonds with it throughout their lives.

As they are rigid and detest surprises, before making any decision that involves them, you must communicate it and discuss it openly with them until an agreement is reached.

If both Capricorns are able to negotiate the decisions that each wants to impose, the relationship between the two will become one of harmony and success.

As they are introverts and lovers of solitude, Capricorns will find it difficult in principle to build an interesting social life, as they will be more interested in achieving their achievements without publicly bragging about them.

Friendship is a precious value for Capricorns, because it is difficult for them to fully trust others, so they take time to get to have true friendships, and usually they are not the ones who make the first approach due to their shyness and appreciation of loneliness.

Their friendship relationship is based on shared values ​​and they are loyal and trustworthy friends, even if they never become so funny as to be the center of attraction at a party.

The outstanding characteristics of Capricorns always make them stand out in their professions, but this is not achieved without tension.

As they are distinguished by their leadership skills, ambition, as well as their responsibility and tenacity to achieve their objectives, they are usually effective managers and very good bosses.

If two Capricorns must work together, there will usually be friction when competition comes out to see who exercises authority over the other in labor matters.

Unless their responsibilities are parallel, in which case they will make a team that will enhance their capabilities and Both will provide the best possible work environment for the rest of the team.

The combination in the work of a man and a woman of the sign of Capricorn is almost a guarantee of success in the company approached together.

The only risk of this employment relationship is the desire for authority that both want to exercise over the qualities of the other to achieve a good performance at work.

They are both disciplined, responsible, honest, and lovers of work, so if they manage to establish a clear work plan with well-defined roles for each one, that relationship will be a success and will undoubtedly pay off.

When evaluating the compatibility between two people of the same sign, it is necessary to assess whether one is willing to interact with someone so similar to one, since both will generally try to dominate the relationship, thereby establishing a struggle so that each one can shine on their own.

This limitation can be circumvented if each one individually, through their practical sense, can finally achieve a personal and exclusive achievement that balances the relationship in this way.

As in any relationship of confronted equals, there is also the risk that the negative aspects will enhance each other.

This usually occurs between two Capricorns due to their struggle for leadership over the other versus the need to share responsibilities between two individuals with such degree of independence.

It also occurs because of the compulsion of both to always be right.

This is a complex relationship, where a failure in mutual trust will divert the center of attention to other interests, if deep enough emotional ties have not been achieved to maintain the stability of the relationship and rebuild it.

As they are highly competitive and ambitious people in their professional aspect, they must both make an effort to develop spaces for interaction, relaxation and mutual care.

The relationship between two Capricorns is usually ideal, since both have work and the desire to improve themselves, as well as the need for a serious and solid relationship in which both will be willing to commit, so it will not be a full life of adventures, but a well-defined and smooth path.