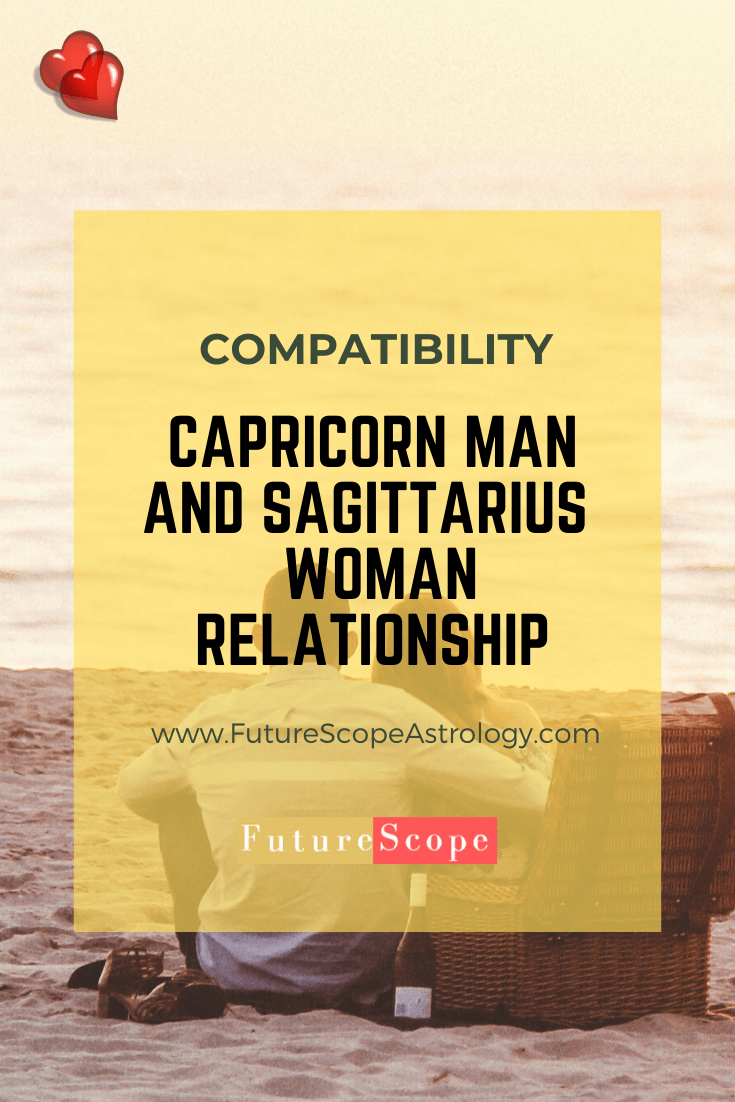 Sagittarius doesn’t seem to have much in common with Capricorn, but it can still be a reasonably good match .

The two of you will have to learn to appreciate their differences before you can feel comfortable together, but once this is done, it can be a very successful team.

So close and yet so far! The Capricorn man and the Sagittarius woman are as immiscible as water and oil, although if they achieve some element of minimal attraction between one and the other, they will at least try to value their differences and come to appreciate them.

The rigidity and seriousness of the very stable Capricorn, contrasts in extreme with the impulsive spontaneity that characterizes Sagittarians in search of their freedom.

The intense passion for life shown by communicative Sagittarians can lead them to fall in love so quickly and intensely that they do not even have time to reflect beforehand if their feelings really fulfill their expectations that they will make them happy, and that someone who now Accompany really shares with them the same meaning of life.

On the contrary, as men born under the sign of Capricorn crave stability above all else and are very serious in all their actions and life decisions, they have enough patience to wait for a relationship that conforms to their very high standards.

Who will show great loyalty to his partner and will do everything in his power to satisfy her.

Despite the noticeable and obvious differences between these two zodiac signs, the Capricorn man admires the characteristics of the Sagittarius woman, and vice versa.

The Sagittarius would love to be able to be more stable and for his spirit of freedom to get calm with someone well planted, while the serious and stern Capricorn would like to know what it feels like to free himself from all responsibility and rigidity and live in If you are able to appreciate what each gives the other that is new in the relationship, mutual appreciation will be established and a strengthened relationship will grow.

Since the Capricorn is introverted, serious and homely, it will almost always be the Sagittarian woman who takes the first step, attracted precisely by that stability of the centered Capricorn man.

As a lonely, mental and introverted man, he is struck by the entertaining, social and outgoing life of the Sagittarius, with the naturalness with which she takes life, without complications. But she will have to work hard with all her charm and ease to open up that well-guarded spirit of the Capricorn man.

The Capricorn man is deeply attracted to the Sagittarius for her independence, her adventurous spirit and the ease that characterizes her, qualities that he lacks and that make him irresistible, although it is difficult for him to know how to handle that Sagittarian desire for freedom.

As a counterpart, the Sagittarius woman seeks the mental capacity and implicit stability of the Capricorn man, and feels that she has a partner with whom to share intellectually and exchange deep ideas.

Sagittarius is ruled by the optimistic and communicative Jupiter, which contrasts sharply with the Saturnine nature, more conservative and reserved. Sagittarius could accuse Capricorn of being a pessimistic killjoy, while Capricorn sees himself as a trustworthy and practical realist.

Sagittarius can unhinge Capricorn by being so quixotic and irresponsible , but he sees himself as idealistic and progressive. The truth is most likely somewhere in between, but it can be hard for either of you to see.

Given the differences that characterize these two signs, it is not very likely that the fireworks that are launched at the beginning in the relationship between a Capricorn man and a Sagittarius woman can be maintained in the long term, unless their will to maintain the relationship is ironclad.

As the most fickle part of the relationship is the one represented by the Sagittarian woman, the achievement of the stability of the couple will depend on her will, being the possessor of that ability to adapt as a mutable sign that she is, and ratifying the orthodox Capricorn that she is willing to give up her precious freedom for him.

As a consequence of the abysmal differences between a rigid sign of earth and a mutable one of fire, the relationships between the closed Capricorn and the extroverted and free Sagittarius will surely be a carousel of conflicts up and down, although the beginning of the relationship seems almost idyllic.

In the Capricorn, the knight hidden behind his rigid armor will be more than ready to save a risky lady who is in distress. But the real challenge will begin when the Sagittarius woman begins to dream of plans for an uncertain future, while her gentleman has his feet firmly on the ground, planning a stable and safe destiny.

If both want to converge in a relationship that works, they will have to give in from their respective extremes of stability and freedom.

While both share the desire to achieve concrete achievements, the way to approach that path and look ahead in search of a goal is different in both signs. While he is concrete in his achievements and knows very well his goal, the Sagittarius dreams of idealized achievements that are normally out of reach.

When they manage to define a common goal to work together, they can consolidate their relationship as a couple, friendship or work.

If you are very much in love and it is necessary to look for a loving connection between Capricorn and Sagittarius, it is important to recognize in advance how different both signs are and to be willing to make sacrifices.