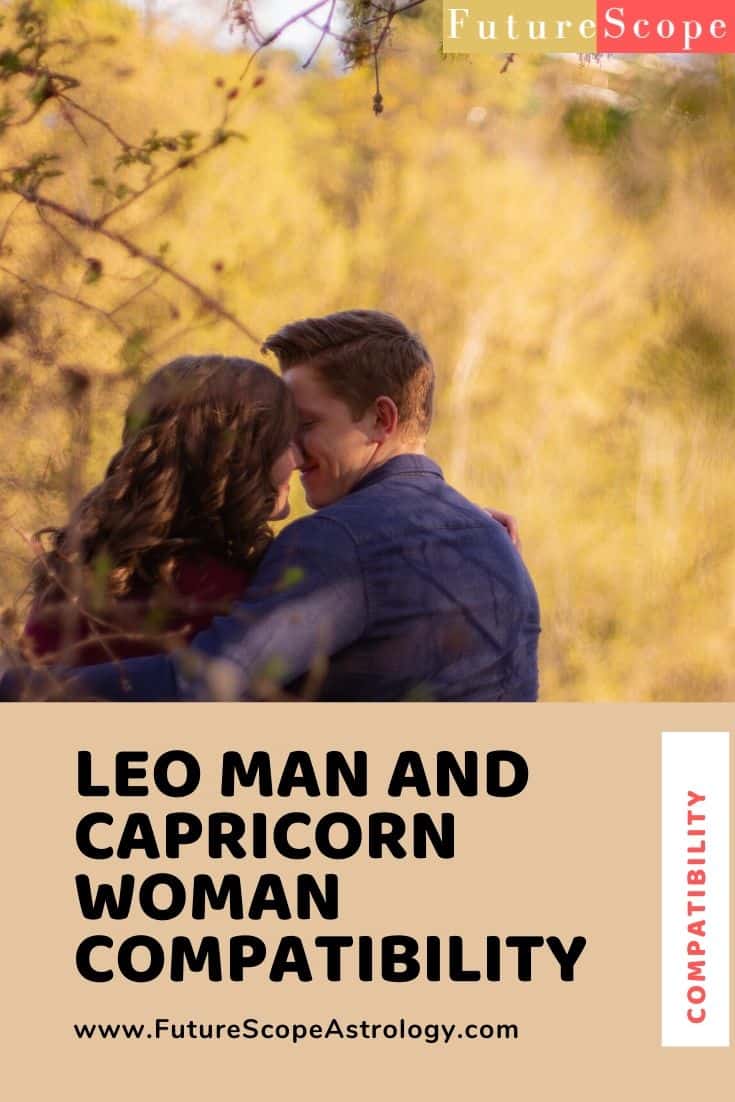 Capricorn and Leo are a very unlikely pair, but sometimes this combination can work very well. There seems to be a karmic connection between the two , especially if they are connected by a family relationship.

If you both put your pride aside and work together for a common purpose, it could be a very rewarding relationship. Its degree of compatibility could be good.

Leo and Capricorn are powerful signs, they know how to take control and take charge of situations to get what they want. When they meet, they can become a solid couple, but it can also happen that the lion and the goat collide heads, turning the relationship into a disaster.

Success or failure will depend on how much you want to work in the relationship to resolve differences and reach agreements that satisfy both of you.

The Leo man and the Capricorn woman have to learn to compromise if they want their intimate relationship to flourish. Everyone has different expectations and ways of seeing intimacy.

The lion wants to go fast, with passion and fury, while the goat prefers to take it calmly and firmly. She appreciates the simplicity of the sexual act, does not like the paraphernalia.

This vision contrasts with that of the Leo man who feeds on passion and emotion, so he is a little disappointed when he realizes that the Capricorn is not interested in the same as he is in sex; he perceives it as cold and distant.

If you want to continue as a couple, the solution within your reach is that you find a middle ground that satisfies both of you in intimacy.

The Leo man and the Capricorn woman are destined for success when they work as a team. Both are characterized by their exceptional work ethic, and the effort they put forth, always to the maximum, to achieve the goals and status they desire.

They both care about the image they project, they want to be perceived as trustworthy people and workers. Both have a tendency to want to take control in whatever situation arises.

They feel good in command, they are born leaders, and for this reason problems can arise when both fight for control and also do so stubbornly, a trait common to Leo and Capricorn.

The two have the power to destroy each other if they do not learn to appreciate and value the different qualities that each of them brings to the relationship.

As a Cardinal sign, Capricorn was born to lead. Leo is a Fixed sign and he won’t mind Capricorn taking the lead as long as he’s the one leading from behind. Together they can be a formidable team … if they decide it’s worth the effort to work together.

This is not the easiest combination of the Zodiac and works best when there are more harmonious aspects between the Moon and the Ascendant. When the two of you want it to work, it can be a very solid relationship. Otherwise, it may not be worth it.

The connection between the lion and the Capricorn does not arise at the first change, it takes time to build it. At the beginning each one thinks that the other is just a person worth knowing, and as they spend time together, they realize that in the other person there is much more hidden than they originally imagined.

The Capricorn is surprised when she discovers that the lion keeps a sensitive heart under its coat of arrogance and airs of greatness. In turn, the lion wants to know more about the inner depth that the Capricorn woman shows;

She realizes that she is not the calm and bored person that she imagined herself to be when he met her.

The biggest obstacle for this couple will be facing tough times. For them everything will be fine when life goes well, but when circumstances get complicated, they will find it difficult to cope with problems.

The Capricorn is prone to depression, and the Leo man has a hard time trying to deal with it while trying to manage his own levels of stress and tension at the same time.

In this way, a greater problem is created, since, generally, the stress of the Leo man triggers his temperament to such a point that the fire could scorch the Capricorn and completely extinguish the relationship.

To the world, the Leo man and the Capricorn woman are appreciated as a powerful couple who lack nothing and who is capable of achieving everything that is proposed.

But inside the couple there are complications because she will not easily submit to the possessive desires of Leo, and the lion is not so persevering as to meet the high expectations and demands of the Capricorn regarding his partner.

But if both work to overcome their differences, being aware of each other’s expectations, they can build a stable and satisfying relationship.

The love connection between Leo and Capricorn will be better if the two are in the same type of business and can run the world together, constantly pursuing their joint dreams.

The ability to take charge in any situation is a characteristic of both the Leo man and the Capricorn woman. This quality, which is nothing more than love of power, ironically, is what makes them both compatible as a couple.