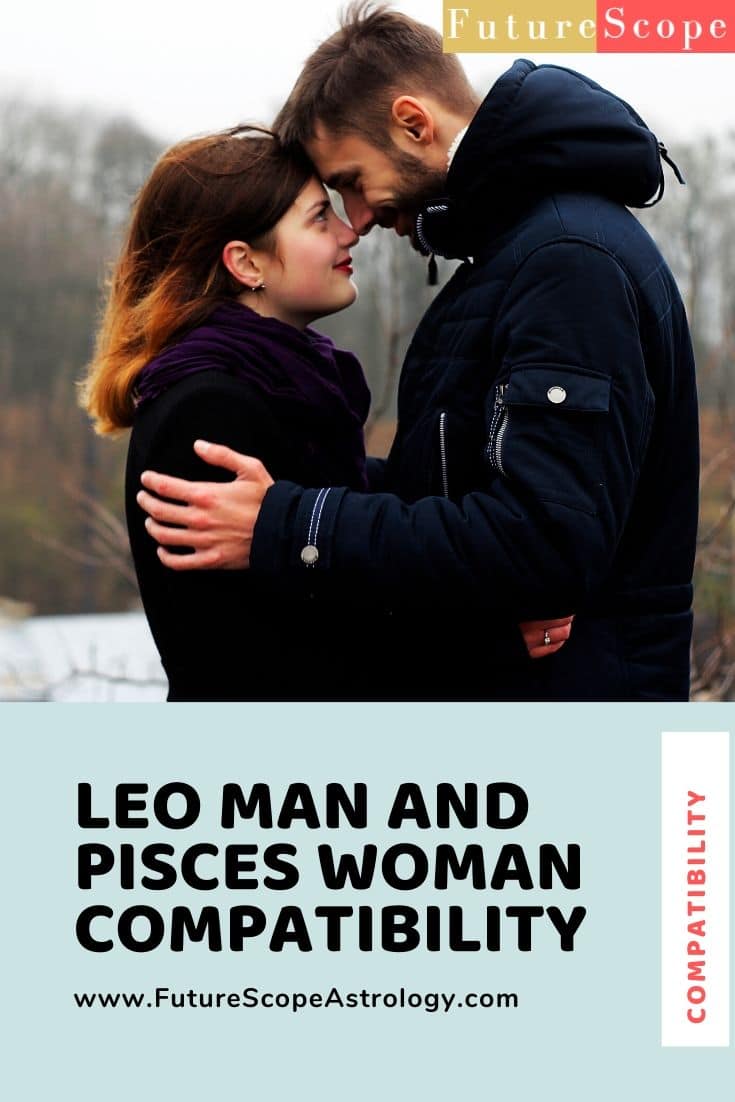 Leo will be drawn to the sexy, but vulnerable, Pisces. Pisces is also drawn to Leo , sensing that Leo has a warm heart and an inner strength that may be there for him when the terrors of the night lie in wait.

Their compatibility and complementarity can be very great .

The union of the Leo man with the Pisces woman is the union of fire and water, two opposing elements.

But these signs share values ​​like loyalty, and traits like creativity and idealism that can make their relationship unique, if they learn to use their differences for the benefit of the couple.

The incompatibility of fire and water will affect them if they do not find the right balance between the elements: if the fire is so violent that it does not allow the water to act, or if the water extinguishes all the flames.

Two of the typical Leo man traits that everyone around him notices are courage and self-confidence. His power stands out, his ability as a leader and innate protector catches everyone’s attention.

For this reason, sometimes the gentle, generous and sensitive side that Leo shows above all in the company of his friends and family is forgotten.

The lion expects love and attention from them, and when he thinks that he is not receiving what he deserves, he feels hurt and abandoned, although it is not easy to notice it due to his cheerful character.

In a relationship with a Leo man, one of the biggest challenges is to tame his impetuous and instinctive ego and his dominant character.

The lion does not like to be told what to do, he does not accept criticism in a good way, so he tends to refute it by confronting and with a certain aggressiveness.

The Pisces woman is the calming water, who avoids confrontation, behaves in the opposite way to Leo. If the Pisces-born woman is angry, she probably won’t say it or it will be a long time before she says it; she would rather be silent than involved in conflict.

However, she emits non-verbal signals of her discomfort that an attentive partner will be able to decipher. She is a dreamy, imaginative and creative person, and who prefers a quiet life, although this does not mean that she does not want to travel and have fun.

You are probably not wrong when you think about what is happening with a person or about a situation or problem.

Her talent for capturing what is happening around her sometimes leads her to absorb negative feelings and energies that affect her mood. It is important then that the Pisces woman surrounds herself with people who can bring positive energy to her life.

The Leo man with his joy, passion and his inclination to protect, may end up being the best complement for the Pisces.

When the physical attraction between the Leo man and the Pisces woman arises, she will be the first to perceive it, but will wait for the lion to take the first step.

The Leo man will express all his passion and generosity when he is conquering her, and he will find a Piscean woman willing to reciprocate, satisfying his needs and desires.

In intimacy, the man born in Leo will give all his passion and fire, he will always want to please his partner, while the Pisces woman, to please him, will unfold all the imagination she is capable of during the sexual act.

The pairing of Leo and Pisces can be full of enjoyment and fun, with both parties fully satisfied in intimacy, fire and water in perfect balance.

Both in friendship and as a couple, the Leo man will be the one who takes the initiative to plan outings and trips, and the Pisces woman will be delighted with it, because it does not bother her that the lion is the center of attention. He will let himself be led by the Leo man, fully trusting his decisions.

Since Leo is a Fire Sign and Pisces is a Water Sign, they will have a very good intimate relationship. Leo will undoubtedly enjoy the attention, and Pisces will feel special having been chosen by the King (or Queen) of the Beasts.

Pisces, a Mutable Sign of Water, enjoys the rulership of the lucky Jupiter and the imaginative Neptune.

This expansive feature gives Pisces a love of photography, glamor, and fantasy, though it can also produce an incurable daredevil.

Since Leo is only happy being in the center of the limelight, a touch of admiration (specifically, the fact that Pisces focuses all his attention on Leo) will lead to a mutually satisfying exchange of energies, at least for a time.

Pisces is very resourceful and accommodating in love , which is exciting at first, but very exotic behavior could be a bit unpleasant for Leo if he takes it too far. Leo is truly flamboyant and loves to dominate.

In friendly relations, the Piscean woman behaves like a good listener and a compassionate person. Your inclination to listen, to give and want to help others, can bring you problems because there will be people who want to take advantage of it.

This will not be the case for Leo, because as a friend of the Pisces woman he will behave with loyalty, he will protect her when others want to take advantage of her.

At work, the Leo man stands out for his leadership and dedication to hard work, and enjoys when his work is appreciated and recognized by his bosses and peers.

He is loved by everyone in the office, although there may be some people who dislike his competitive nature and his desire to climb positions.

The Pisces woman is not in this group. She is not bothered by the character of the lion, on the contrary, she likes it and is attracted by the energy it radiates.

When they work as a team, the Piscean woman will let Leo take the leadership; It will support you with your creativity and intuition.

It is unlikely that disagreements will occur between them, they make a good duo, the imagination of one and the drive and leadership of the other complement each other and form an efficient team.

Possessiveness is common between spouses or lovers of this couple. A typical Pisces woman is the embodiment of flirting, and Leo, of course, roars menacingly at the slightest hint that someone might “put an eye” on his girlfriend.

Nevertheless, he can expect from her that she will calmly look at his unreasonable acts caused by vanity and a thirst for admiration.

Leo and Pisces are signs with opposite personalities, but which complement each other. If you decide to make your life together, you will find happiness. Conflicts may appear, but since they both have such a strong sense of loyalty, they can overcome adversity in the relationship.

The couple will work if it is balanced, if the Piscian allows the lion to take the reins and enjoy the attention, and as long as this dominance does not make her a submissive person to the point of restricting her own personality.

If there is balance, love and understanding, the future is bright for Leo and Pisces.

For the love between Pisces and Leo to work they will have to remember what brought them together in the beginning. Leo will have to be more understanding of Pisces’ feelings and Pisces will have to respect Leo’s desire to rule in the jungle.