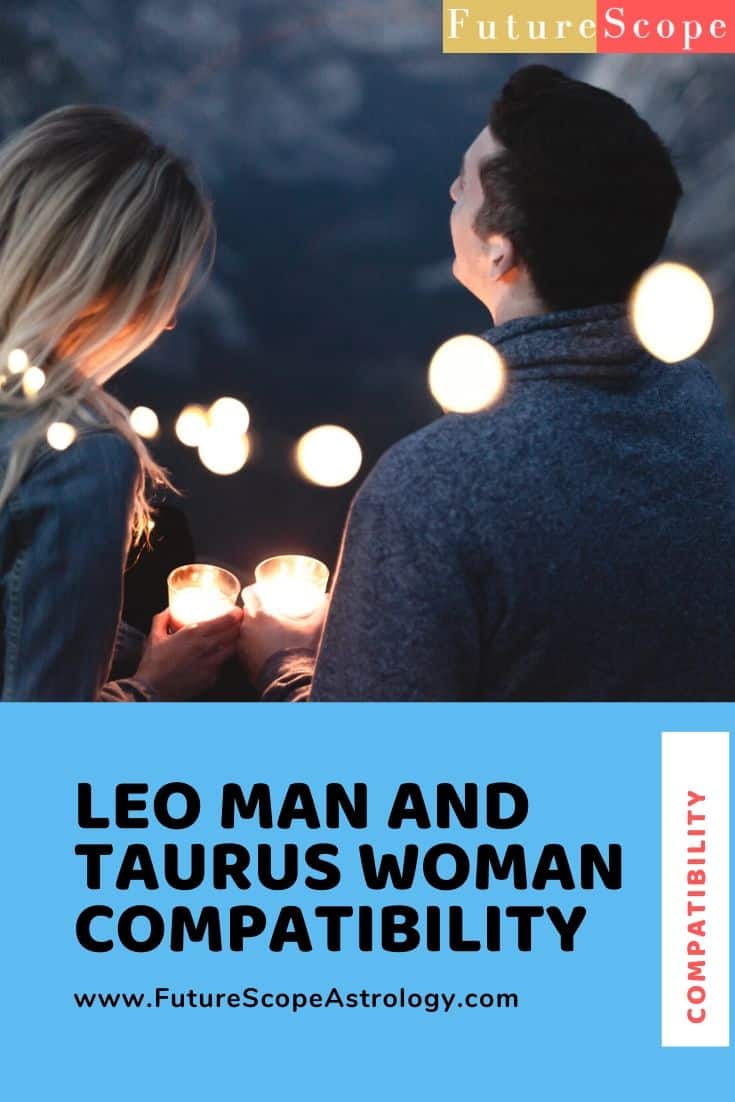 Compatibility between Leo and Taurus is medium, as long as the two signs assume their differences and manage them intelligently and avoiding their usual stubbornness.

The stubbornness of the Taurus is also part of the characteristics of Leo. They both have great determination and cling to a decision once they have made it.

This zodiac combination will most likely show signs of permanence, steadfastness, and devotion , despite fierce fights at times.

Pairing between a Leo man and a Taurus woman often presents challenges due to the stubbornness that characterizes both signs.

The two must be willing to reach agreements to resolve the most important differences they face in the relationship before thinking about establishing a long-term bond.

Leo, trapped by his tendency to laziness, may want to shy away from the relationship at the first change when he realizes that it won’t be an easy path, while the Taurus-born woman doesn’t want to count on the lion when she notices that nothing fits. at first.

In short, the relationship between a Leo man and a Taurus woman is a gamble. If they decide to do it, the journey they take together will be challenging, but also enjoyable.

As for intimate relationships, it can happen that Leo and Taurus are either very happy or very worried despite their efforts to do their best. The stubborn side of the two signs comes out in this regard.

The Taurus woman will have to understand that she must break her comfort dynamics alone at home if she really wants to spend more time with her partner.

For his part, the Leo man will have to give in a little to his desires for fun and socialization, and accept that the Taurus woman will be more open as the relationship progresses and becomes a commitment.

Despite all the problems they are facing, both will enjoy intimate relationships, as the two signs enjoy romance and passion.

Between this couple there will always be attraction and chemistry, they will operate in intimacy naturally, almost without needing to request anything to be pleased.

In this case, the couple relationship could work exceptionally well. Taurus will admire the charisma that Leo has socially and Leo will support Taurus socially.

Leo has a protective element and is deeply committed to caring for his partner and family. Taurus will be drawn to your loyalty and will enjoy receiving the security you need.

The two show great compatibility also in terms of passion and romance . On the physical side, Leo unleashes Taurus’s sexual desire, but at times, this can prevail and Taurus can feel that his emotional needs are not being sufficiently attended to.

The Leo man enjoys being the center of attention, strives to be, and loves to socialize. His feelings of friendship are genuine and he is usually generous, affectionate and loyal to his friends.

She does her best to bring joy to her loved ones, she hates to see them angry and sad. For this, he appeals to his endearing, fun and overflowing personality with a good sense of humor.

On the contrary, the woman with the bull is an introvert and is not among her socializing priorities. However, he is capable of making friends because he is by nature reliable and calm, qualities that attract other people.

She accepts everyone as a friend, but a few as close friends, because she feels the need to defend herself due to her vulnerable interior, although she is apparently strong.

The Leo man and the Taurus woman get along at work. They do not have problems working in a team, they must only establish before who will exercise the leadership role.

They are both hard workers, but Leo always runs the risk of being involved in an office drama and finds it difficult to stop socializing. For her part, the Taurus woman focuses solely on work, does not have time for social relations, much less to engage in drama in the workplace.

Between Leo men and Taurus women disagreements arise in many areas. One of them is leadership, since both signs are born leaders, they want and fight to position themselves as leaders in any situation.

Another area of ​​disagreement is how they interpret the sense of possession and protection. Taurus will not feel like sharing Leo too much with all the acquaintances and friends he surrounds himself with in his intense social life.

She prefers to stay at home, where jealousy can make her suffer for not having her partner by her side.

The problems will come because the lion will not be willing to give up surrounding himself with the people who nurture his ego and for whom he also shows affection, generosity and loyalty.

Likewise, perhaps the Taurus woman does not find within herself the conviction to establish a committed relationship with a man with self-centered and selfish features like Leo’s. You will suffer if you cannot find the reciprocity you are looking for.

With all the differences they may have, the Leo man and the Taurus woman have a good chance of being happy together.

They should only moderate expectations regarding the other and commit each day to loosen their stubborn attitude for the good of the couple.

Leo can earn Taurus admiration and she can earn her time alone when there is communication, clarity and commitment in the couple. Pairing these two signs is challenging, but both Leo and Taurus are ready to take it on.