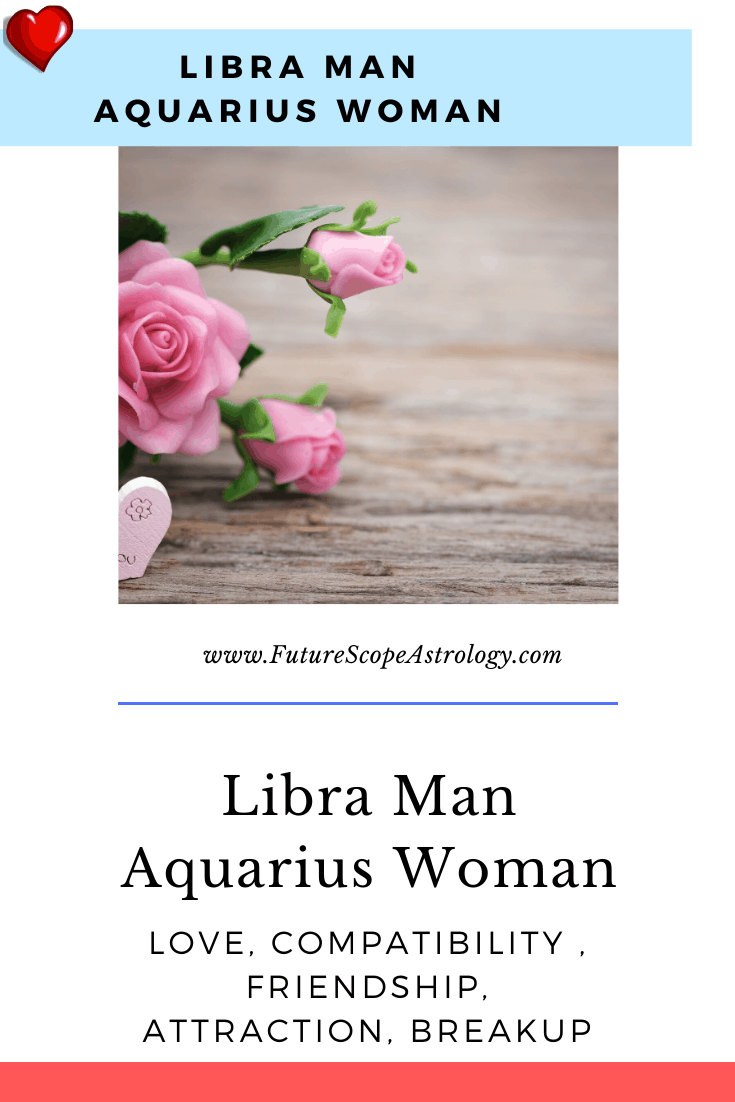 The compatibility between Libra and Aquarius is excellent

Both signs are sociable, they love to talk and enjoy meetings and social events. They are both very outgoing and tend to have many friends. You both like independence and that is why it will not be a problem to give and enjoy some freedom within your relationship.

The Libra man and the Aquarian woman have in common their love of freedom. Both of you can also share a special connection based on your intellect and your ability to socialize.

The combination of Libra and Aquarius has enormous potential for compatibility. Neither of you feel left out or alone when your partner, friend or partner socializes with other people.

For the Aquarian, the Libra man’s desire for association is worthy of admiration, and he does not tend to get too emotionally attached. So there are no problems.

The problems between Libra and Aquarius could arise from the clash between the obstinacy of the Aquarian and the diplomatic and negotiating character of the one born under the sign of Libra.

But these occasional issues don’t stop both signs from establishing a promising relationship due to the similarities between them.

Both Aquarius and Libra enjoy giving, and neither of them will demand much of their partner.

Libra will be able to use his persuasive skills to achieve a difficult level of commitment for Aquarius, but he has everything going for him to achieve it. Libra will bring creativity to the couple and Aquarius the decision necessary to develop it.

Libra is much more romantic than Aquarius but since both signs are very generous and open to trying new sensations, this would facilitate the intimate relationship. Libra will be more interested in formalizing a serious relationship, than Aquarius.

The Aquarius-Libra couple is usually more compatible, for a long-term relationship, especially when both have already lived experiences with other couples.

In intimacy, the Libra man seeks romance, a desire that can confront him with the Aquarian personality if he becomes attached to this need.

In any case, it is a setback that can be solved, since Libra and Aquarius make up a communicative couple, ready to face and solve any disagreements they may have.

As for sexuality, the Aquarian will give herself completely to the Libra man, she will not be afraid or shy to explore and please.

The man born under the Libra sign will have to be patient to wait for the Aquarian’s expression of feelings, because she has to be totally comfortable in the relationship and with herself to do so.

The Aquarian likes to have fun and is a friendly person. However, you will only have close friends whom you consider to have fascinating and exciting personalities, with whom you can go on adventures, overcome challenges together, and experience the most interesting things in life.

The Libra man shares with the Aquarian the sociable character, but he lives it in a different way, with more tranquility and without making so many differences about what a friendship can offer him or not in terms of emotions and fun.

Open your heart to make new friends and enjoy sharing with them. However, the sociability of the Libra will tend to decrease when it has already settled with a partner.

Both signs have in common loyalty to their friends, family and partners.

Thanks to their many common interests, Aquarius and Libra are not only compatible as a couple, but also as friends.

Libra represents elegance, has a lot of style and know-how, which attracts Aquarius a lot. Aquarius represents strength and stability, but he is also adventurous and pioneer, two elements that are irresistible to Libra.

Libra men like to work in teams, they feel attuned in groups, and they tend to excel when it comes to cooperating.

He is willing to help whenever necessary. This does not mean that you will be fooled by others into overworking or doing the work that is due to your colleagues.

It is difficult for you to make decisions, because you have a tendency to examine situations and scenarios too much, but you will work with dedication to do your job. The Aquarius woman also enjoys helping others and has no problem working in groups. With the Libra man you will form an efficient team.

The Aquarius woman also enjoys helping others and has no problem working in groups. With the Libra man you will form an efficient team.

If she is in a leadership position or pressured by criticism, the Aquarian will show dominant traits. However, it is not expected that you will have great problems working alone or with others.

The union between a Libra man and an Aquarius woman is refreshing, full of satisfaction for both, although small differences arise in the relationship. The Libra man has in his favor the virtue of patience to wait for the Aquarian to adapt emotionally to the relationship.

Their intelligence and their desire to help others are two traits that unite them. The charm of the Libra man and the wild nature of the Aquarius woman can be an ideal combination.

Possible difficulties that can arise if Aquarius brings out his most critical side, because Libra is much more sensitive and will hurt him. You will not understand very well the ability of an Aquarius to be alone and could take it as not loving her enough.

But thanks to his great understanding, if Aquarius explains things to him patiently, the relationship would not be in danger.

On the other hand, Libra tends to be more emotionally demanding, which could suffocate an Aquarius who will have to learn to be more romantic than he is used to. Libra’s diplomatic skills and tolerance will make Aquarius change.

And the tenacity and strength of Aquarius are good complements to the indecision or instability of Libra.