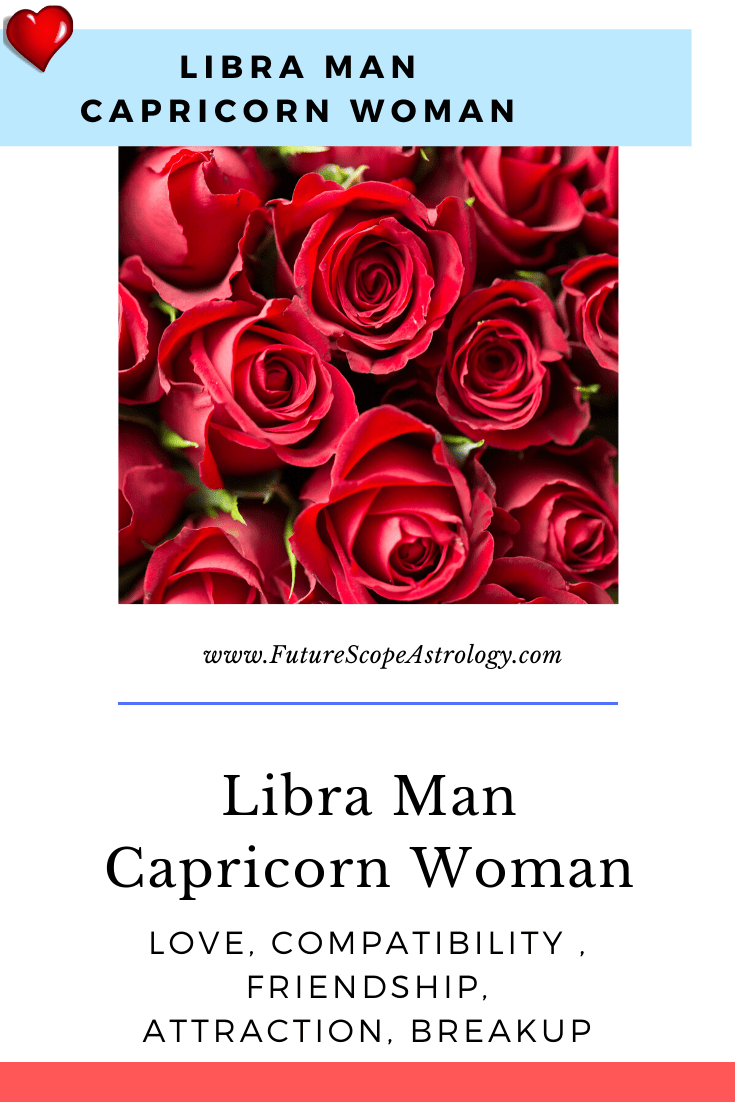 It is not the most comfortable combination of the Cosmos for several reasons, but that does not mean that they cannot learn to be together and love each other very much.

In fact, if you learn to appreciate and respect each other’s strengths and weaknesses, you can both become a much better person. it will just take patience and understanding, and perhaps a well placed Moon and Ascendant.

The relationship between an air sign and an earth sign is characterized by struggle. The Libra man and the Capricorn woman do not escape this trend, there are no exceptions when these two signs come together.

The woman of the Capricorn sign loves her independence, it takes a relationship with a very strong bond for her to agree to alter or adapt her routines. The Libra man has balance among her principles, while the Capricorn lives at her own pace and in her own way.

The balance man’s assertive communication difficulties are among the main obstacles in this match. It is not an insurmountable obstacle, it can be resolved if both signs make an effort to reach agreements.

The Capricorn has the ability to project the self-discipline that characterizes her in her dealings with the Libra man, and this is good for the relationship. With effort from both parties, the relationship can achieve lasting happiness.

Intimacy is where the Capricorn woman lets her emotions flow. The difficulty of expressing them in other areas of life is left aside when you have an intimate relationship, where passion overflows.

This behavior can clash with the Libra man’s taste for romanticism, who expects a calmer demeanor and adequate time for courtship.

Balance is possible if you both talk and make your expectations clear in the relationship.

However, the delivered, rigid and ambitious behavior of the Capricorn towards her work implies a struggle that does not leave her free time. In order to reach agreements and for the relationship to have a future, the Libra man has to overcome his fear of confronting and expressing his needs.

The Libra man has the virtue of making friends easily. His temperament is attractive to other people, and he enjoys company.

He has an inspiring optimism, and this vision of life leads him to be that person who is always willing to help his friends, to do what is necessary to make them feel good.

He loves being around friends, although he’s not a big fan of noisy places and gatherings. You will only give up your social life if your partner absorbs it excessively.

The Capricorn, on the other hand, prefers to stay at home, where she enjoys relaxing in solitude. She is an introvert, but capable of making friends as long as they match her values, as she is not willing to waste time trying to change the point of view of others.

To become a close friend of the Capricorn, it takes a long way. But, it is worth it, because once this bond occurs, it will be practically indestructible.

You value your independence, you expect others to respect you, and you seek to mate with people who also think this way. Unfortunately, the Libra man does not share these traits with the Capricorn.

Men born under the Libra sign are workers attached to ethics and good collaborators with anyone who requires support. They are efficient and work wonderfully as a team, always making sure that the tasks are distributed fairly and that the group does the best possible job.

They know how to maintain the balance between work and free time, they do not allow their work ambition to rob them of moments of rest and fun.

The Capricorn, in contrast, is tremendously ambitious in her job. She works with intensity and dedication, and the self-discipline and self-control that she demonstrates propels her into positions of supervision and leadership in which she shines.

It has a great capacity to organize, it is efficient and critical. This last trait doesn’t win her over at the office, but that doesn’t stop her.

Libra and Capricorn make a key that works when they work together because they are both efficient and are not distracted by drama when meeting work goals.

The combination of a Libra man and a Capricorn woman has risks because it is usually full of irritability.

However, all is not lost. It is possible that both can get on, for example, if Libra channels her desire to be very close to someone to her friends, in order to respect the independence that Capricorn values ​​so much.

The self-confidence and self-reliance of the Capricorn benefit the Libra man, if he is willing to sacrifice his desire to have a partner as romantic as him.

This couple has the advantage that both signs like to work hard; then they can focus on making the relationship work. After all, it is not a bad idea for both signs to meet and start a relationship.

The problem arises when , being the two Cardinal signs, they discover that both want to rule .

This could be a disaster, because the two of you have completely different ideas about the best way forward.

Libra, Air sign, likes to live in the clouds, high above the Earthly Capricorn. Libra is fascinated by ideas, while Capricorn insists on material and concrete facts: if you can’t see or touch it, what use is it?

Libra can frustrate Capricorn with its enormous indecision , always ruminating back and forth in a sea of ​​pros and cons. Capricorn, for his part, clears his mind and clings to his ideas … And if his ideas turn out to be wrong, he will have a hard time accepting it.

Capricorn can help Libra to be more determined , while Libra can help Capricorn tolerate the fact that choices are sometimes not always so clear.

It can be a difficult relationship, but it can work out well, especially when there are harmonious aspects on the Moon and Ascendant.

Even though the two of you have very different temperaments and motivations, you can learn to work together productively and positively.

For a Libra and Capricorn relationship to work, the two of you will have to focus more on what happens after the lights are turned off, when they are left alone.