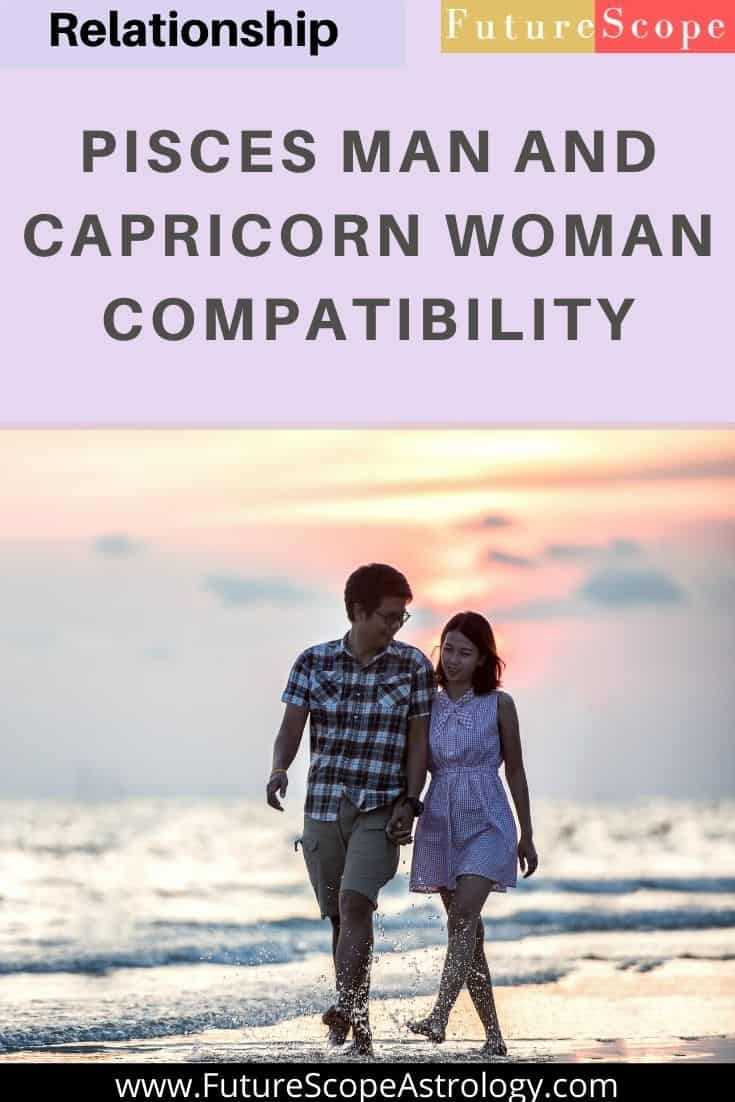 Pisces is an excellent match for Capricorn , although at first there may be doubts. Pisces is a dreamer and can appear fragile, but sometimes subtle fortitude can be mistaken for weakness.

The combined strengths of both help to compensate for their individual weaknesses, and together they make a strong and satisfying team.

The Capricorn woman is a leader by nature, she is persevering when it comes to reaching a goal, even when it is loving. But the Capricorn must be careful if it is the Pisces man who shows interest in her.

You may not like what you are about to discover. And it is that the Piscean is an innate dreamer and they like to enjoy life swimming in freedom.

The character of the Pisces man contrasts with that of the Capricorn woman, who usually has firm feet on the ground and a cold temperament.

The relationship between both signs is possible, but there is a high risk of volatility due to the differences between the two. It takes an extra dose of effort to make the match work and last.

One of the keys will be for the Piscean to master his mutable nature to adapt to the needs of the unchanging temperament of the Capricorn.

The Capricorn will have the task of imposing discipline to bond emotionally with the Piscean.

When it comes to intimate relationships, the Capricorn is not as self-disciplined as in other facets of her life. If the relationship is unsatisfactory in this regard, she will not insist and will leave it.

The Pisces man sees intimacy as a way of expressing his romanticism and a way to connect emotionally with his partner while enjoying intimacy together.

The Capricorn woman does not have this same vision, she does not enjoy romanticism as much as the fish man.

Friendship and love relationships come easily to the Pisces man. Always look for the kindness in others, people with whom you can reconcile emotionally and whom you can “fix” a little to your liking.

The Capricorn woman prefers to live friendship with distance, she seeks to relate to people who share similar values, and she does not intend to mold or change her friends to adapt them to what she wants.

The Capricorn is usually conventional, it is important for her to feel the approval, for example, of her partner’s parents or friends.

It is possible that the Piscean will make the Capricorn express her emotional side.

She usually learns from her mistakes and takes them as an opportunity to improve, then realizes when she hurts the Pisces man and does her best not to repeat this action in the future.

The Pisces man performs efficiently working alone and in a team. He is not lazy and is willing to help his peers.

The Capricorn woman performs efficiently in management and supervisory positions, does not allow sentimentality to interfere with her judgments or decisions, nor does she show favoritism for anyone.

Together they work without great problems, except when the Piscean is in a superior position than the Capricorn.

The Capricorn woman does not usually feel comfortable working as a team because her know-it-all attitude is not well seen by peers.

The Capricorn’s self-control is a trait in her favor to avoid conflicts and dramas, while the Piscean’s strong point is also her tendency to soften and settle any disagreements in the work environment.

This combination usually works well and only fails when there are major conflicts between the two’s cards.

As long as the two of you communicate openly, clearly and on a regular basis, it should be a long and very fulfilling relationship. It is a perfect combination.

The Capricorn woman will not tolerate infidelity, but the Pisces man is inclined to forgive too soon and is a great optimist.

The Capricorn is difficult in relationships, but if she is interested and in love with the Pisces man, she will cling with all her being to this relationship.

The pairing between a Pisces man and a Capricorn woman is highly risky. In a relationship between the two, neither success nor happiness are guaranteed, but if both truly want it, they can fight until they achieve a lasting and happy union.

The Pisces man will know perfectly, by his intuition, when to move away if the Capricorn woman does not move to broaden the horizons of the relationship.

But if they achieve harmony in what they both want to be together, through communication and sincerity, the Pisces man and the Capricorn woman can achieve a happy and stable coexistence.

Although it may be a mostly smooth path, in a love union between Pisces and Capricorn some friction may arise due to the behavior of both, either because Capricorn is too practical and methodical or because Pisces’ choices are based solely on emotions.

However, nothing that cannot be overcome with a little patience.