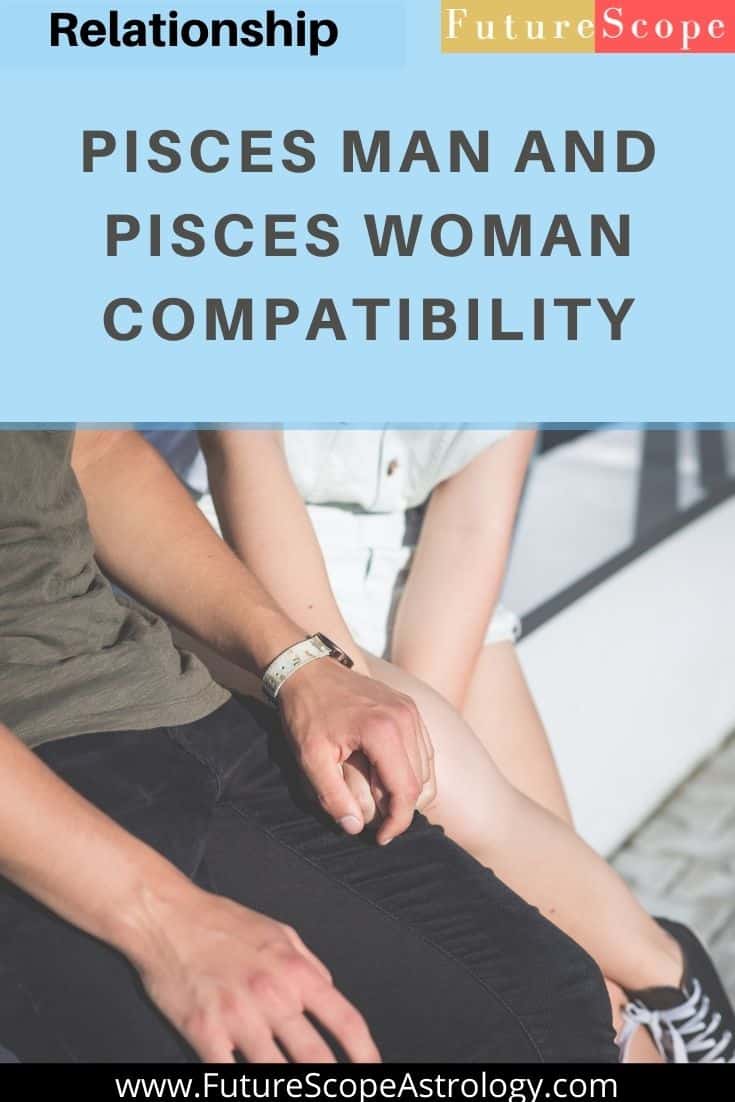 Pisces, the Fish Sign, is a Water Sign. Two fish together can create a private paradise or a hell on earth, depending on whether they choose to swim downstream or upstream.

While the two are irresistibly drawn to each other, both are prone to getting lost in dreams and fantasies.

Two dreamers together may have a wonderful, but also turbulent relationship.

The great advantage when the Pisces man and woman come together is that each understands perfectly what the needs of the other are. Only a Pisces has the ability to understand the depth and complexity of the emotions of another Pisces.

Sensitivity and charm keep them together, but the difference between what one dreams and another can lead to separate them.

These fish could begin to swim separately if either of you does not take the initiative to give stability and security to the relationship.

Those born under the Pisces sign are optimistic, always expecting the best to happen, even in the worst situations.

It is a positive trait in a relationship, it means that both are willing not to give up so easily to achieve happiness.

Intimate relationships will work if the two Pisceans achieve stability in reality by making it clear what each dreams and needs.

They are not in favor of fleeting relationships, if they have reached intimacy it means that there is depth in their feelings and commitment to make the relationship grow.

In sex they will perform with passion and romance, the emotional connection between them will be evident since they will know how to express it without problems.

The key for the Pisces couple will be to communicate in time what they need and what they don’t like; If they remain silent avoiding problems, the relationship will not have a good fate.

Pisces man and woman are admirable, friendly and charming. Although they are introverts, Pisceans have a natural magnetism that attracts people.

Pisces are too trusting, they have no malice to know when someone is trying to take advantage of them through manipulation.

One of the problems that arise in this pairing is the inability of Pisceans to say no.

Her desire is to please the other, to make her friend or partner happy, even at the cost of lying about her own dissatisfaction in the relationship.

Colleagues enjoy working with those born in Pisces because they are collaborators, they are always ready to help those who need it.

They perform efficiently in both individual and group jobs, but have a tendency to work too hard. They are not interested in assuming supervisory positions.

Pisceans work well together if they can focus on goals, and bosses don’t usually get in trouble if they let them work their own way.

The union between Pisces man and woman is usually successful.

Lack of stability can be a problem, but if they are aware of this weakness they can address it with communication.

The only danger of this union is taking this connection for granted … Although it may seem to one that the other can read your thoughts, you will need to clarify some things by speaking or in writing.

It is not a good idea to try to cheat on a Pisces lover. Surely, you will know the truth somehow and it will hurt that your partner has not been honest.

These Signs need to lean on their partners for security, while providing the social lubricant and joie de vivre that can make other stronger and more stable couples happy.

Without a stable anchor for the relationship, the two Pisces could be lost in a sea of ​​overwhelming emotions.

Reality can produce dissatisfaction with Pisces’ innate sensitivity, making it easy to hurt them even if there is no such intention.

Romanticism unites Pisces, but the relationship between fish can be messy and unstable because they have a tendency not to focus on their responsibilities in the real, practical world.

For the compatibility between two Pisces to really work, perhaps you could work opposite shifts during the week and then spend the weekend together.

Turn off the phones and unplug the doorbell for magical romance alone.

Even if they are of the same sign, they must make sure, for the relationship to work, that they know the values, dreams and needs that guide their lives and evaluate if they coincide.

Pisceans’ empathy helps them understand each other’s emotional complexity, which is undoubtedly an advantage for the future of the relationship.

They both long for romance, but one of the Pisces must take the first step to lead the relationship and make it go down a path where communication abounds and problems are not evaded.