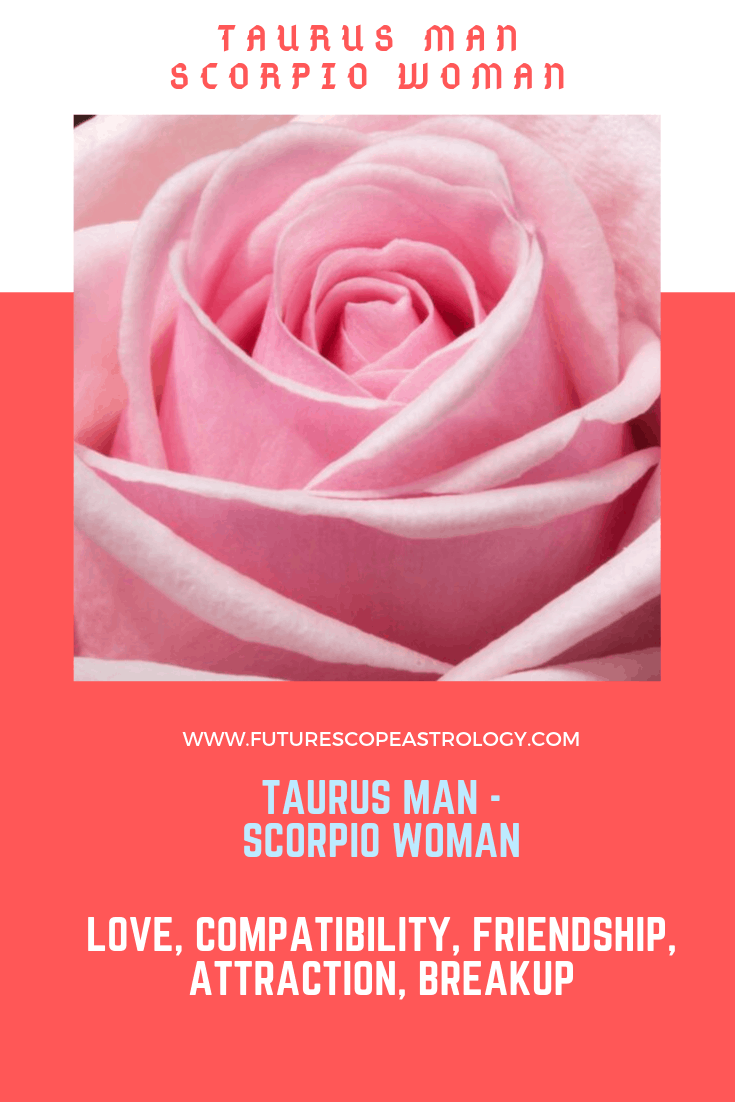 The compatibility between Scorpio and Taurus is higher than it might seem. Taurus and Scorpio are opposite zodiac signs and that is why, sometimes, they are hopelessly attracted to each other.

Their first meeting could be simply incredible and Taurus could be surprised by the passion that his presence awakens. Given the connection between Mars and Venus, there is a good chance that a strong magnetic attraction will arise between the two signs Taurus and Scorpio.

There are people who bring out the worst and the best in ourselves. In the case of the combination of a Taurus man with a Scorpio woman, they appear to be a couple formed in the same heaven.

The compatibility between two beings of these signs is utopian, with so few negative aspects that without a doubt it would be one of the couples with the greatest potential to be happy.

The bull and the scorpion come together in an exciting way in almost every possible way. In the game of seduction, she is very agile and the great Taurus becomes her prey.

She will never give up, even if there is some resistance on her part in the first few approaches. Initial differences are quickly overcome because they have many issues in common.

They are one of those people who a few days after meeting, they have already become accomplices in the most unusual situations and both enjoy it. They can also become opponents very frequently, but this is a very interesting discussion of ideas.

Things can get a bit complicated if you don’t learn to ease the tension built up between the two of you.

They both want exclusivity from the other, so there is a chance they will end up being best friends. This exclusivist quality can work both for and against, since they could suffocate their fellow adventurers.

Scorpio needs to express his love through intimacy, while Taurus may need more affection, because he is more sensitive.

Scorpio will help Taurus explore the part of himself where love and sensuality reach their peak, while Taurus may be able to persuade Scorpio to turn to his more forgiving side and learn to let him live.

They are good listeners, but very bad at talking about themselves. Taurus has the peculiarity of assimilating and processing a large amount of information, talking a lot when he becomes confident, but reaching that point is not easy and does not happen with anyone. Scorpio can become your confidant, with him you will have all kinds of transcendental conversations.

The Scorpio woman is dominant by nature and the bull does not usually compromise in almost any aspect. Here is a power struggle that must be handled in the best possible way. They need to learn to listen to each other, instead of starting a fight to find out who is the most powerful.

As in the aspects mentioned above, the magic of the union of Taurus with Scorpio is transferred to the work field. He will know how to deal with the impatient Scorpio personality, especially if the latter is in a position of subordination. The work environment created by them will be motivating.

If they have a common goal, they will not stop until they see it successfully accomplished. They are people who manage to understand each other well at the work and business level because they have the same affinity with success and money. Finances are tasks that Scorpio women are good at, which is why they will be key to simplifying the path of a Taurus.

The admiration is mutual, but tensions can occur in times of great stress since neither of you can fully manage your temper. Intellectually they understand each other perfectly, however, Scorpios are inflexible and Taurus are stubborn, which can put them in trouble when handling money matters.

Both Taurus and Scorpios are very possessive , and especially Scorpios, jealous. Scorpio demands much more emotional bonding and intimacy than Taurus, which can create some problems.

Another common trait that can lead to arguments is the stubbornness of both of you. Scorpio’s inflexibility will conflict with the Earth element and Taurus’s stubborn focus. Couples of this combination will agree on some things, but will argue indefinitely over others, and will clash quite often.

You both need to compromise from time to time. Control of money will be one of the main tests and both signs will have to work hard in this field for the relationship to work.

Since both Taurus and Scorpios find it difficult to express themselves fully, their discharge of emotions can frustrate them. They need to learn to open up, at least to their partner.

Although there may be mistrust on both sides, it will never be a real problem as they are both extremely faithful and loyal. As long as they manage to make room for each other, the relationship can work perfectly.

The Scorpio woman is dominant by nature and the bull does not usually compromise in almost any aspect. Here is a power struggle that must be handled in the best possible way. They need to learn to listen to each other, instead of starting a fight to find out who is the most powerful.

It is important that both of you learn to work on the conflicts that arise, since if you do not pay the necessary attention to some events, the positive relationship between them can easily turn into a toxic matter that leads to separation.

He is looking for a person with whom to live a predictable and serene life, but the Scorpio woman will give a little life to the relationship.

Since both signs have difficulty expressing themselves, emotional discharges can be frustrating. Both need to learn to open up at the right time to make the work environment less emotionally draining. In this way they will also be able to be loyal and faithful companions.