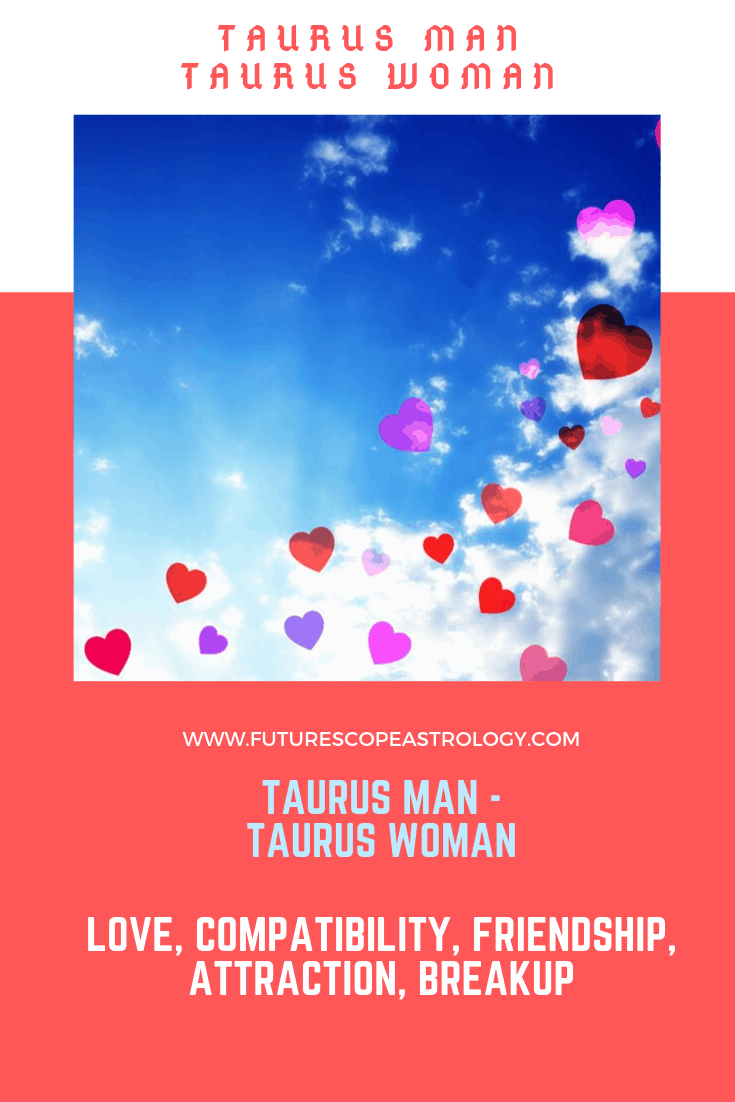 The compatibility between Taurus and Taurus is very high. Taurus is the sign of the earth and this forms a very solid foundation for the relationship. There is something simple and straightforward about Taurus . They are practical and not too complicated , so they are very compatible in a relationship.

The combination between a man and a woman of the Taurus sign is another of the highest in the zodiac. Of course, it is to be expected some challenges to overcome on the part of both so that this relationship is completely satisfactory.

Pairing with an equal can mean enormous personal growth for both of you, as well as being quite stimulating.

Taurus always prefers to establish relationships with people who do not demand too much energy, who are emotionally stable. People with a high level of arousal, who frequently seek adventure, are usually a problem for the bull, which despite being a powerful animal, is quite predictable.

Now what happens when a bull meets his match? Looking in the mirror is a difficult but rewarding process for both, because they have the opportunity to present themselves as they are from the beginning, without masks and without having to try to adapt to the rhythm of the other person, which works in favor of this relationship .

They are both hard-working, responsible for the people in their care, good providers. They are excellent mothers, who take care of all the needs of the home and also make room to tend the litter when their bull companion returns home.

They love calm activities, like watching movies or any quiet activity.

They have a high intimate compatibility .

Taurus are very romantic, they like to show their love, love and feel loved. Both will have the same criteria and expectations and their relationship will be full of romance, love, care, attention and loyalty.

Friends are very important to Taurus , so when two Taurus get together, there will be numerous cultural and social activities.

This sign is introverted and has difficulties socializing, at least in the way understood as normal. I mean, they love spending time with their friends, going out and doing things, but they are a bit select with people, so you won’t find them often at parties or trying to be the center of attention at social events.

In this way, relationships between two Taurus tend to develop between exclusive circles of faithful and loyal friends, with similar tastes and a lot of complicity. Both can have the same friends in common and protect them in a paternalistic way;

Taurus are those people you can turn to in any situation and they will help you no matter what you ask.

You must not confuse the matter. Taurus are sociable and very friendly, but they don’t give their trust to just anyone.

Emotionally they protect themselves and only show their true essence to those people who gain their trust, so developing friendships takes a little time and the same happens with relationships.

These are two accomplished leaders, who prefer to lead by example. They have the gift of leader, but they prefer not to have to fulfill this task.

They are tireless workers and that leads them to gain the admiration of everyone around them, assuming high positions within the organizational structures in which they participate.

Two Taurus working on the same team will not compete with each other, because neither of them wants to assume the leadership position.

They prefer to work in solitude and in silence, but if they must share spaces and develop the same goals, they will support each other in an impressive way, because they see the value of their opposite and help them grow.

Taurus is reluctant to change if they feel it is being imposed on them, which means that neither of them will force unexpected changes on the other.

This is largely positive, but it also has its risks, since it implies that, in this combination, both parties can enter, without realizing it, a pattern of behavior of laziness, dissatisfaction and even boredom.

Another possible area of ​​conflict arises if both Taurus intend to control financial affairs, as Taurus are very stubborn and inflexible .

They are also prone to maintaining their personal opinions, even at the cost of home harmony, so both will have to work on this part of their personality to find a way out of conflicts.

It is possible to totally trust a pair of bulls working together. They will accept any challenge that is imposed on them and will find a way to solve all the dilemmas that arise, with hard work, effort and the stubbornness that characterizes them.

Being mirrors, in few ways they will collide with each other, so they are good for teamwork.

The most compatible combination is between Taurus born between April 20 and 29, although it is a generally compatible relationship for all Taurus.