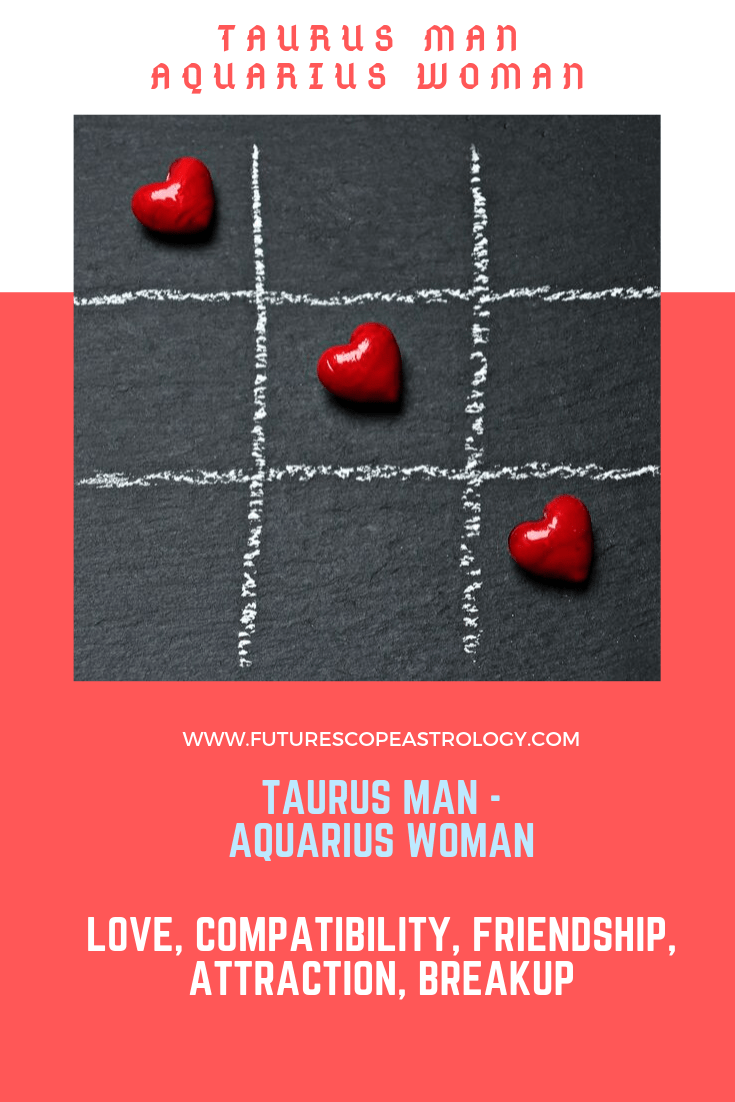 The compatibility between Aquarius and Taurus is not very high due to the incompatibilities , which exist between them. But it does have a lot of possibilities as long as both of you are willing to work hard to make it work.

The Aquarius woman is a special woman, and she needs a special man. True, some say that she is a fatal woman who needs a very patient man. Probably Taurus, because over-patience is one of his virtues.

This is a relationship with many surprises, each day will be full of new stories and the anecdote after a few years as a couple will be quite extensive. In the eyes of Taurus, the Aquarian woman has a special spell;

She is especially intrigued by her originality, artistic qualities and the overflowing energy that she usually possesses.

The bull is patient and the woman of water flows freely, so developing a stable long-term relationship is challenging.

If love is true, this challenge will be the necessary impetus to consolidate a stable future, which is excellent news for both of you. Both can live great adventures and develop side by side.

As a couple, tensions between the two will be inevitable. However, the Aquarius woman is very good at solving conflicts, which is ideal to balance the stubbornness of Taurus, who is never willing to give up what her heart tells her to do.

The most important thing for the Taurus man is that his partner shares most of his ideas.

In contrast, the Aquarian woman has a great preference for adventure. She needs to flow freely, be independent and have news every day.

This particularity does not displease Taurus in principle, but with the passage of time that level of independence can be a cause of insecurity, especially when she has very marked volatility as a personality trait.

The personality of the Aquarius woman is unique, and for many of us unique – means special. For the signs of the Earth, “unique” usually means fatal, strange, incredible.

The difference is only in the definition, and the essence is that this woman is unusual. She intrigues the male Taurus as she is mysterious. This is not a secret that he feels around a Scorpio woman, not understanding whether she is vicious or pure, cold or warm.

The mystery of this woman, ruled by Uranus, is whether this woman is a reality. This fascinates him.

Around it reigns that special atmosphere that is difficult to determine. And this is so natural, because she was born under the sign of Air.

For example, when she starts a sentence and stops half a word … or turns her gaze into the distance when he says to her: “I love you” … or when it is difficult for her to remember his name – something like that. Taurus later discovers that in reality she was in the present and perfectly aware of everything.

She did not miss a single detail. Her apparent distraction is only a sign that her mind is slightly ahead of what is happening and she is a little bored. Aquarius can be here or there, but here or there – it’s still far away.

She has her own rules regarding love and everything else, and she is true to them. It is these qualities of honesty and integrity that attract Taurus to the Aquarius girl and even make him surprisingly often endure what is contrary to his inclinations.

He understands that she is one of the few honest people left in the world. One of those moral and reliable people you can rely on. But it’s better to stay here.

The physical attraction of Aquarius is never as strong or deep as that of Taurus.

Her penchant for abstract extends to her sexuality, and since Taurus has nothing abstract in this, it can cause him insomnia. She has more curiosity than sensuality and eroticism. She has a complicated outlook on love – too “airy”, he has – earthly and simple. However, in the warm, loving nature of Taurus, there is something that warms her soul. And in her open and honest love, there is something that evokes tender patience in the male Taurus, which only makes him stronger.

Both should share a good intimate relationship , as the utopian Aquarius will help Taurus to discover a deeper side of his nature and to obtain more satisfaction from sex.

As a counterpart, the Aquarian woman is socially given and always participates in activities that allow her to connect with new people. Speaking and expressing yourself is one of the activities that you are most passionate about, therefore, your friends and the people you decide to interact with are usually interesting, intellectual and fun people.

Unlike the bull, the Aquarius woman if she has a wide circle of friends and knowing that she has the innate quality of being sociable, does not worry too much about being jealous with the relationships she establishes. At this point, the differences between the two signs make understanding between the two impossible.

If we look at this issue from another point of view, we find a relationship in which both can learn if they are open to understanding the message. Taurus men can learn to expand their social circle and women to value the quality of relationships much more than quantity. They both have compensatory characteristics on the subject of love and relationships.

The most positive point of this combination is at the labor level. When a Taurus works alongside Aquarius, competition and conflict are drastically reduced, creating a very satisfying work experience. What happens is that the bull is a born worker, who enjoys the effort and money that he earns from the sweat of his brow, as well as being born leaders.

Women have little interest in leading situations, but they commit, give their best and know how to comply with the leader’s instructions, which is why this pair can be dynamite in the work environment. Of course, the aquarium needs a certain level of independence and freedom of action in order for it to fulfill its assigned functions in the best possible way.

Something that cannot be avoided is that both have opposite ideas and are constantly in disagreement. Learning between them is balance; By achieving equanimity in most situations, working together will be able to carry out projects in which both of you will feel very comfortable and confident.

She is able to bring light and excite the most routine tasks, making the whole process of working together much easier to carry; He has a clear focus, firm decisions, and enough determination to tackle a wide variety of situations that require tenacity.

Taurus resists change , he likes things as they are. Aquarius , on the other hand, prefers to keep up with the times and evolve, change with the world . Although this may not be very serious, it could cause some compatibility issues.

The conservative side of Taurus can clash with the progressive and unpredictable Aquarius . Some Aquarian ideas are impractical for Taurus. Aquarius focuses on social issues, diplomacy and politics, while Taurus thinks that charity and good management start with oneself. Taurus is more concerned with immediate life challenges than community or even global problems.

Taurus stubbornness combined with Aquarius stiffness can lead to some problems as well. Taurus can also find it difficult to adjust to new and unusual Aquarius ideas. There is no lack of determination in any of them and once they focus on something, whatever it is is no longer a dream. However, problems can arise when Aquarius becomes unpredictable or wants to be alone. The Taurus lust for possession and jealousy may be too much for Aquarius.

In principle, problems usually arise thanks to the bullfighting coldness and its level of pessimism. As time goes by, the Aquarius woman will feel that her gentleman is a boring person and will notice his distance. All this will result in a stagnation in the relationship and problems begin to appear.

Taurus is introverted and jealous with his friendships, which is why he establishes deep and eternal bonds. By not having a constant supply of people who desire his friendship, he develops an unrivaled devotion, which will cause him to fiercely protect the members of his pack.

Whatever love surrounds this man, he always wants more. No matter how loyal the Aquarius woman is, she is forced to share her love between him, friends and all of humanity in general. Sometimes these two people think that in their relationship there is not enough love. She will not be, if you only take. If you know how to give, a lot of it – an inexhaustible supply!

However, if there is enough love and the two signs are determined to make the relationship work, they can become compatible assuming that both make an effort to accommodate their differences and not feel threatened by them.

For this couple to be compatible, both of you should be willing to focus on those issues that you have in common, rather than on the things that separate you. Compromise is possible on both sides, but it is constant, hard work that can become exhausting for both of you over the years.

Both seem to live on a different planet, but being signs of fixed quality, they will have enough drive together to work for common goals and will not stop at any obstacle that prevents them from getting where they want to go. However, they must always be alert and willing to give in to avoid that the slightest dispute ends up turning them into enemies.