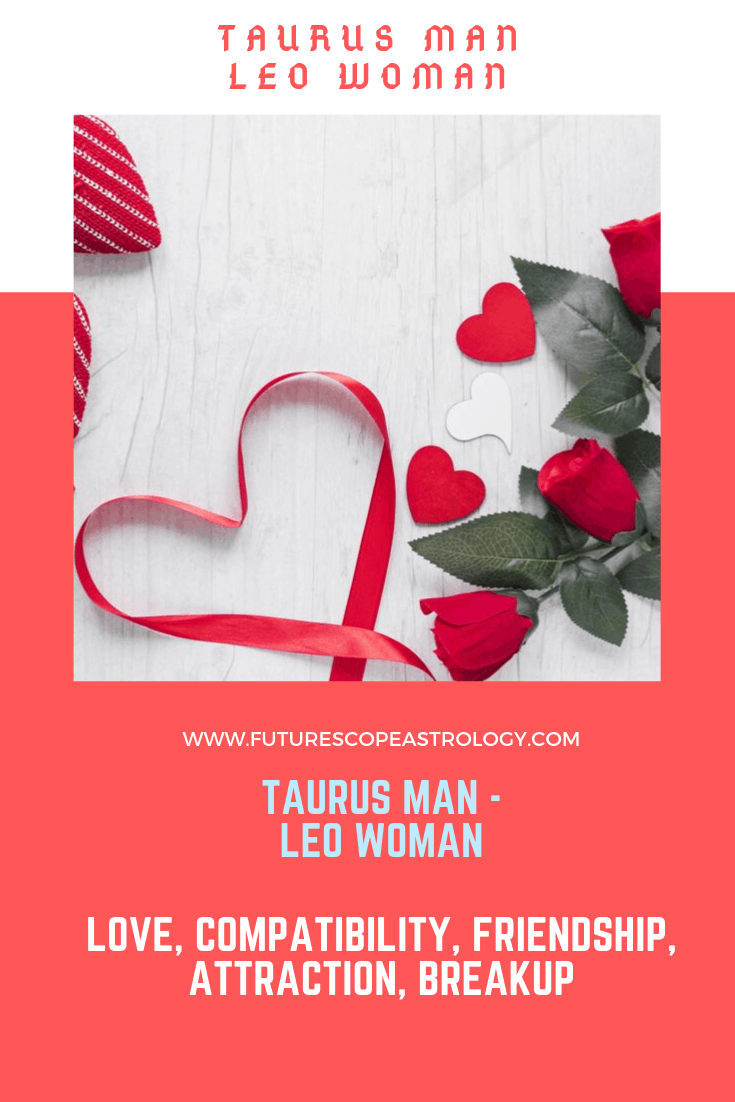 The compatibility between Leo and Taurus is medium, as long as the two signs accept their differences and manage them intelligently and avoiding their usual stubbornness. The stubbornness of the Taurus is also part of the characteristics of Leo.

They both have great determination and stick with a decision once they have made it. This zodiac combination will most likely show signs of permanence, firmness and devotion , despite strong fights at times.

Let’s face it, the chances of a successful union between these two beings are very low. The road will be stormy for both, they are two beings with overwhelming personalities and who do not combine anything well, at least in most aspects.

Sexually, they may be compatible, but there are many other details to consider.

Taurus is almost completely opposed to Leo, but they well say that opposites attract, and lionesses can become attracted to the bull in a way they have never felt before, a feeling that is overwhelming for both.

As friends, compatibility is much more feasible, but as a couple, the difficulties are enormous and it is good to think coldly.

This is not at all one of those fairy tale relationships, where everything flows naturally, it is rather a dramatic, romantic and at times exasperating story in which both will have a lot to change and give in if they want to see happiness in the end. of the tunnel.

If you do not like confrontations, do not participate in this relationship, as simple as that.

The clashes are more than normal in the day to day of these signs. Leo is a lady who is always ready to take control of her life and dominate any situation.

The Taurus is attracted to this quality of the Leo until she begins to try to dominate the overprotective and domineering, seeing her virility threatened.

Leo women do not like changes, they prefer routine and know exactly the daily movements of Taurus.

He works tirelessly to have well-being and provide it to everyone around him, but at the end of the day his routine is predictable, just wanting to go home and have company. Here, a plus point for this relationship.

In this case, the couple’s relationship could work exceptionally well. Taurus will admire the charisma that Leo has socially and Leo will endorse Taurus socially.

Leo has a protective element and is deeply committed to caring for his partner and family. Taurus will be attracted to your loyalty and will enjoy receiving the security, which you need.

The two show great compatibility also in terms of passion and romance . In the physical aspect, Leo unleashes the sexual desire of Taurus, but at times, this can prevail and Taurus may feel that their emotional needs are not being sufficiently attended.

The same can be transferred to relationships. Adding that the sexual component is one of the keys by which both signs may be willing to compromise in other aspects of life. Losing such a compatible sexual partner is difficult for both of you;

With such a level of physical, mental, and sexual attraction, you’d better get to work on the differences.

The spectrum of differences in this pair is huge. Both have an intransigent nature that makes it difficult to move towards less passionate states, therefore the discussions are usually very passionate, full of affirmations of power from both parties; a bull is not willing to give in, a lioness knows herself to be queen, nor will she want to lower her head.

The emotional implications of this relationship are many. The sex is intense, the love can be enormous, the attraction is impressive, but the daily routine can be very complex.

For this relationship to work, both of you have to work on commonalities, learn to resolve differences, persevere, give in, and understand each other.

We already know that Taurus is one of those men who do not become small in the face of difficulties. Any challenge that is presented to a bull, he will assume it with the tenacity and stubbornness that characterizes him.

In addition, he is quite helpful and can put his skills at the service of the work team without any kind of pettiness.

Leo’s wife is also a wonderful hard worker, very capable and ambitious, competitive and aggressive on her route of ascent.

Being the best at what she does is her goal, she seeks admiration, but she is not interested in being flattered; she knows exactly how to work properly to shine and stand out from the crowd without too much effort.

Placing these characters within the same work team can be a bit complex, since in principle there will be a quite important clash of egos and they will be able to hide very little.

Drama in the office is very common when a lioness is around, it is something they cannot avoid. They are always the center of attention for one reason or another.

Now, can you work as a team? Of course yes, but the quality of the work of this pair will depend on the delimitation of the leadership.

Both must be clear about who of the two is the leader and what functions are the responsibility of each. If you are both in similar roles or competing for the same promotion, heads will roll around you.

If rules, parameters, clear work guidelines, job descriptions and responsibilities are not clearly established, this team will not have very good results as they will spend most of the time arguing, rather than finding ways to achieve the objectives of the more efficiently, which is what is expected of a company’s staff.

The only possible solution to this conflict, in addition to the above, is for job competitiveness to develop between friends.

If they are colleagues who have known how to link professional activity with a friendship, they will be able to bypass differences and power struggles to focus on productivity and efficiency.

The Leo woman falls very easily at the feet of the Taurus man. His manly charms, his masculinity and the way he protects his loved ones is all she wants in a man, but that conflicts with her own lioness nature, aggressive, ruthless and free to act as she pleases.

She is powerful and is not willing to be overshadowed.

However, this power struggle is the cause of one of the most intense sexual attractions in the zodiac. The encounters between them are fiery, passionate and long-lasting.

The bull delivers all the power that it boasts to a lioness willing to receive all the virility of her man. In bed they are completely compatible, completely blurring the differences.

However, their different personal dispositions and their incompatibility of tastes can lead to some problems. Leo is a PR , loves having an audience, earning their attention and is quite quirky.

On the other hand, Taurus is a bit reserved and prefers to be alone with people with whom he has a closer relationship. Taurus can see Leo as overly exaggerated, while Leo can get bored with Taurus.

The problem lies in the personality clashes that can arise, since these are two signs with powerful, vigorous and outstanding personalities.

If they manage to avoid these situations or solve them correctly, Taurus and Leo have the ability to form unbreakable unions, being close friends, of maximum confidence.