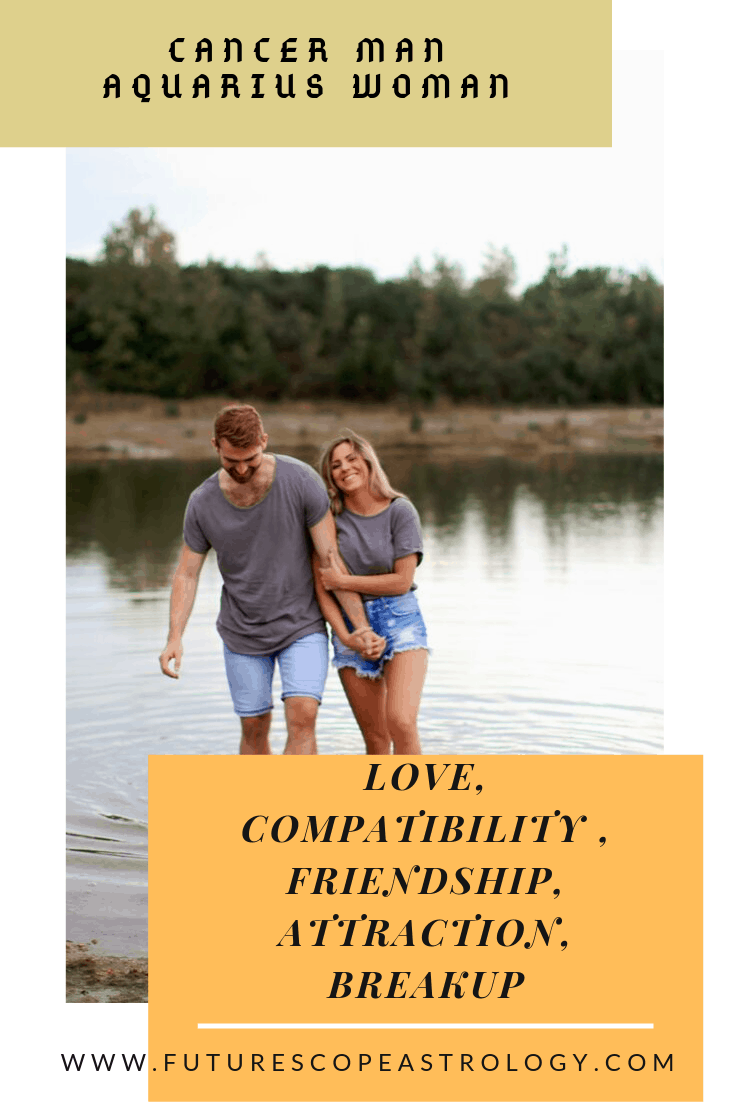 The combination of Cancer and Aquarius signs presents many challenges in a couple. Compatibility is low at first glance, although thanks to the fact that both signs are very persistent, if there is enough love and willingness to strive, a lasting relationship is difficult, but not impossible.

The compatibility between the Cancer man and the Aquarius woman is one of the weakest and most infrequent in the entire zodiac. It could be said that these signs are almost completely incompatible, but it is necessary to explain the causes of this fact and the exceptions to the rule. First, the reason for the incompatibility must be explained.

Both Aquarius and Cancer are associated with personalities reluctant to change, somewhat immutable personalities in regard to their most intimate qualities, which, in addition, are usually related to their problems in maintaining stable relationships.

One of the problems with Cancer men and Aquarius women is their poor tendency toward commitment. But are they really like that? In reality what happens is that (for different reasons) both signs are extremely reserved, especially Cancer, who is usually very introverted and somewhat suspicious.

The flip side of this story is that precisely because of their reserve, the Cancer man and the Aquarius woman can identify the causes of their differences and, after a healthy negotiation, learn to deal with them to carry on a beautiful relationship.

This combination brings Cancer’s lunar vibrations and Aquarian’s uranian element into play, which together creates a very electrifying and often hectic relationship with a host of exhilarating adventures.

It is likely that there is also a passionate intimate relationship , not to say spasmodic, between the two.

Regarding intimate relationship, these different needs also influence their satisfaction. In the case of Cancer men, sex becomes an encounter with the other, an activity in which closeness and affection are demonstrated.

To be compatible with Aquarius, the sign of Cancer must be prepared to explore a few more things in life and to give up some of its preconceptions so that it can share some of Aquarius’ exhilarating spontaneity.

Aquarius, in turn, will have to settle his head a little so that Cancer has the opportunity to get inside. This is their fort and although most Aquarians fear sharing their interior, if they do, the couple will be more united.

And when a Cancer-Aquarius couple reaches maturity and stability, they bring together a combination of qualities so disparate that they lead to a unique and formidable force.

When a couple between Aquarius and Cancer ignores these important aspects, that is, those essential needs that each one possesses, they usually decay until their dissolution.

The recognition of them can help make the relationship work and is satisfactory and favorable for both of you. Both daily company and intimate relationships can be much more satisfying and enjoyable if these fundamental differences are recognized.

They are based on the fact that Cancer prefers to work as a team or as a couple, while Aquarius tends to work better independently.

Of course, this implies that the Aquarian woman will always tend a little more than Cancer to impose her perspective on how things should be done and will not think twice before casting strong criticism of Cancer’s work.

For the latter, this is devastating, given that due to their great emotion, criticism is never well assimilated.

However, both the Cancer man and the Aquarius woman do not like drama, so even when conflicts and even small arguments arise, they will not reach embarrassing levels.

What can happen is that both Aquarius and Cancer cross each other and do not want to work together again.

If they both recognize their strengths and weaknesses, they can make an excellent match for the workplace. The Cancer man will bring a more humane and compassionate perspective to the Aquarius woman and this will prepare him to accept criticism, strengthening his self-esteem and emotional stability.

The recognition of these factors can, in turn, represent a great benefit for the work environment, especially if both Cancer and Aquarius occupy important administrative positions within the workspace in which they work.

Due to their very different personalities, Cancer men and Aquarius women present different and apparently contradictory needs. The Cancer man usually has more marked affective needs and the Aquarius woman usually needs a marked respect for her individuality and personal space.

This means that the Cancer man requires the attention of his partner to feel loved and valued while the latter requires Cancer to reduce their pressure so as not to feel drowned and limited within the relationship.

Aquarius needs to explore all paths throughout life before establishing a firm commitment to someone and for a Cancer, much more traditional and conservative, the wait may be too long.

Aquarius, on the other hand, may feel trapped with a sign, which demands absolute dedication to himself and the family.

However, since both signs are very loyal and somewhat stubborn, they can overcome the differences, especially if the relationship begins at a more advanced stage of life when Aquarius has completed its discovery phase and appears to settle down.

By nature, the Cancerians will try to bind the Aquarians , bring their independent and free nature to the line, to bring them into a routine of stability, so it will be enormously infuriating and irritating for Aquarius to do something unexpected or spontaneous, since for the Cancer planners being spontaneous equals being reckless and even irresponsible.

Therefore, for the relationship to work, both parties must be very patient with each other.