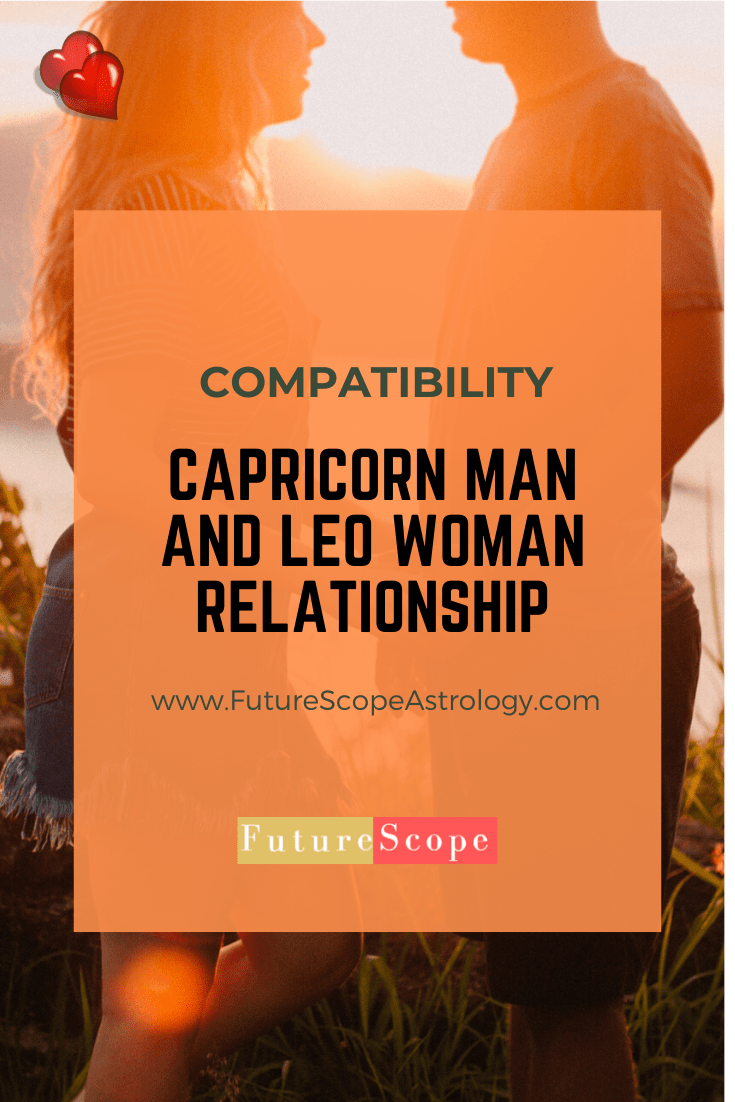 Capricorn and Leo are a very unlikely pair, but sometimes this combination can work very well. There seems to be a karmic connection between the two , especially if they are connected by a family relationship.

If both of you put your pride aside and work together for a common goal, it could be a very rewarding relationship.

The relationship between a Capricorn man and a Leo woman is an interesting challenge, because even though they share certain characteristics, they also have many opposing things that cause them to clash.

The two signs are perfectionists and ambitious in their purposes, but while Capricorn does not give importance to social recognition of their achievements, staying disciplined and focused on their work, the Leo woman likes to be admired for everything she is and what she does. , and he would love to have a life in which others pay homage to him.

This is why a relationship between a Leo woman and a Capricorn man is usually the clash between two opposite paths. Despite this, it is possible to mediate to achieve meeting points that allow them to live together in harmony.

There are, however, two fundamental living conditions that both share and that allow them to get closer to each other, which are honesty and integrity.

If a Leo woman gets into an intimate relationship with a Capricorn man, it will be because they have been able to recognize and share their common core values.

If they manage to overcome their differences and not insist on them, and can communicate effectively to smooth things over, a very active sexual life will be the culmination of their union, since both are signs whose intense shared passion will also be key for them to integrate deformity durable.

Despite this, Leo’s compulsion for adventure and external recognition can cause disagreements with the Capricorn man, who prefers to be focused solely on his work activity and family relationships.

As part of the recognition that is necessary, the Leo woman feels happy with a partner who accompanies her in social activities, even if he is not a protagonist like her, because in the end what she needs is only to have his presence.

Before falling into the arms of a Leo, a Capricorn man will have religiously applied all of her previous selection filters.

Even though Capricorn men can’t really be considered shy, their love of introspection makes them socially reserved. Even liking recognition for his achievements, he would be unable to draw attention to them, as the Leo woman would be well prepared to do.

Contrary to what it might seem, the man of the Capricorn sign is kind and appreciates friendship, although he must meet a series of previous moral requirements that meet his expectations before he can be considered as your friend, and he knows how to appreciate the effort made by the other to achieve friendship.

Once they have reached the limit of their expectations, they are loyal and supportive friends.

For her part, the woman of the sign of Leo loves social life and external manifestations that are paid off in compliments that show her how much she managed to impress.

Despite this, the friendship of a Leo is not superficial, but is woven in a charming way with her generosity, good humor and empathy, so her ego is not appreciated manifesting so harshly.

When it comes to sharing a common workplace, the natural leadership spirit of both Capricorn men and Leo women will clash head-on, trying to achieve a position they aspire to for different reasons.

Capricorn men only dedicate themselves to solving the assigned task, while Leo women will do their work punctually and efficiently, but not without the risk of generating conflicts in the middle of their performance.

Since they both like challenges, if they are forced to work as a team they run the equivalent risk of repeatedly facing each other and delaying the achievement of objectives, or of joining forces to achieve a great result.

Normally both are in disagreement in most of the things, less in those aspects related to their principles and values, since both are upright and honest.

Since Leo is an impulsive and emotional Fire sign and Capricorn is a practical and controlled Earth sign, both will have to learn to respect and tolerate their different temperaments .

Leo can tire a Capricorn with his unbridled enthusiasm and legendary tantrums, while Capricorn will likely suffocate Leo with his pessimistic humor and old-fashioned ideas.

The two of you have the power to destroy each other if you don’t learn to appreciate and value the different qualities that each of them brings to the relationship.

Capricorns and Leos share vitality and passion with each other, but they can clash when the impulsiveness and aggressiveness of the Capricorn is shown, against the stubbornness and arrogance of the lionesses if things are not done according to their wishes.

Another great trait that distances them is that the Capricorn lives strictly in the serious and concentrated reality of work, while the Leo woman is able to get out of it to live in the idealized world of luxury and comfort in which she prefers to squander her grace, although he is also a dedicated and hardworking person.

For their part, both share aspirations for leadership, but the Leo woman will be able to give in to it to a Capricorn if she can find alternative ways to stand out.

The interaction between these two signs is not for those who seek serenity and peace, or a partner who remains crouched with respect to the other, as both have a strong personality and determined to succeed in the pursuit of their goals.

However, when a Capricorn-Leo couple has achieved stability through true love, they are struck by the feeling of having found happiness, despite the work involved in maintaining that balance.

The love connection between Leo and Capricorn will be better if the two are in the same type of business and can run the world together, constantly pursuing their joint dreams.