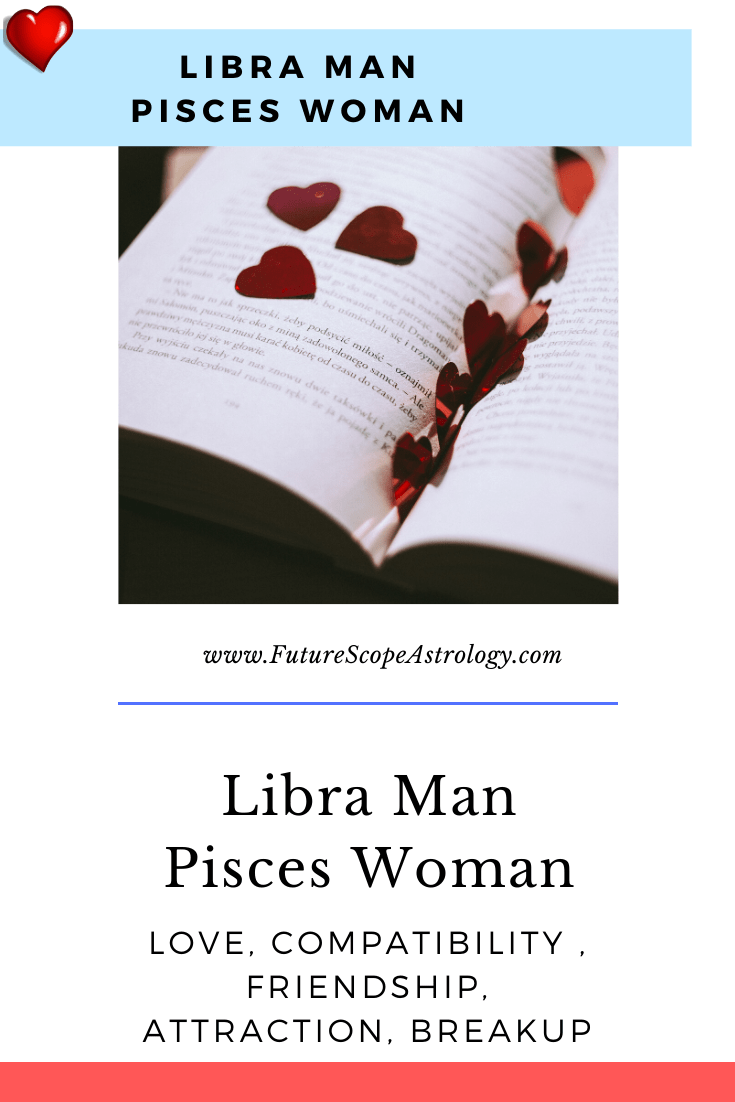 Libra and Pisces are an unusual combination, but the attraction between the two can be intense .

Air and water don’t mix easily, so Libra will have to be attentive to Pisces’ needs, even if they don’t always understand what they are. It is by no means an easy combination, but when it works, it has a special quality.

The Libra man and the Pisces woman are happy next to a partner with whom they can live romance and joy. The romance between the two is usually passionate, so the union between them has a high probability of success.

The Pisces woman is detached and devoted, she will have no problem adapting to the taste for balance that the Libra man manifests in all areas of his life.

Both have an inclination to cooperate and a tendency to avoid conflicts, fights do not dominate in the pairing between these two signs. However, some problems may arise due to the very nature of each sign.

For example, once the infatuation rage has passed, the Libra man might feel uncomfortable with the Pisces woman’s desire to be alone, and observing how much she enjoys time with herself.

For the Pisces woman, it can be shocking that the Libra man wants to bring her back to reality and away from her dreams and self-absorption.

Despite potential disagreements, there is a high compatibility between the Libra man and the Pisces woman. If you know how to cope with conflict, you will feel satisfied and happy being together.

Pisces are charming and eager to please. Venus is strong in both Signs, but Pisces has a delicate beauty or air of mystery, thanks to the Water element and the influence of the mysterious Neptune and the healing Jupiter.

Libra can easily appreciate this, which is why they find Pisces fascinating. Pisces, in turn, appreciates Libra’s tender touch, her enthusiastic sense of style, and her ability to grasp the nuances of human relationships.

The intimacy of this couple is full of romance from the beginning, even when the relationship has already gained stability.

The Pisces woman has to be aware that the man on the scale can never match her emotionally, and that does not mean that he is not given to her. For her part, the Libra man has to understand how much the Piscean needs her protection, and when she needs to be alone.

The patience of the Libra man helps the Pisces woman feel satisfied and happy.

He is the Pisces girl’s anchor to reality and stands by her side so that when necessary, she makes rational decisions. Both signs will be happy if they get together.

The Piscean is an introvert, but that doesn’t stop her from making friends, even more than some more sociable people, because she exudes empathy.

Others tend to like her because of her charm, kindness and trustworthiness, also because of her selfless dedication to her friends and her compassionate attitude.

The Libra man enjoys socializing and is outgoing. He is usually the mediator when problems arise in groups of friends, he is chosen for his conciliatory and diplomatic character.

He shies away from people who prove to be troublesome and malicious. He does not hesitate to intervene when he observes bad intentions or some injustice against his Piscean partner, he acts as a protector.

Both the Libra man and the Pisces woman are appreciated by their peers and bosses at work.

They have in common that they avoid conflicts and dramatic situations, their goal is to be efficient and cooperate with others when they require it.

They also share their low interest in competition and in climbing positions.

Regarding the differences in the work area, the Piscean prefers to work alone, while the Libra man loves and brings out his best side as a worker when he joins a team. There will be no problem between them when they work together.

The union between a Libra man and a Pisces woman has the potential to be dreamlike. They are sweet and romantic.

The Pisces woman cannot match the Libra man’s propensity for justice and balance, but she does understand and support him, always showing empathy.

The Libra man repays her by taking care of the risks caused by the Piscean’s weaknesses.

For this couple, the path to happiness is clear, love will be long-lasting and able to overcome any obstacle.

They both have a dark side, so they are comfortable in a private world. However, in the outside world, the rules can change. Where Libra likes to debate, mull over and reflect, Pisces keeps its secrets and need for solitude.

Pisces doesn’t always want Libra to penetrate deep within. It is a mysterious and emotional Sign, so if Libra does not become enchanted by mystery, they will not have a path to travel.

Libra and Pisces don’t mix easily, but this bond can be something special if you get to understand each other. However, Pisces is known for choosing the wrong partner. If it doesn’t work, the attraction between the two of you could slowly fade.

The Piscean often takes refuge in daydreams because she fears the harm that the real world can potentially cause her. As she is often trusting and incautious, she falls easily prey to abuse and manipulation by malicious people.

The Libra man has a weakness to tolerate abuse out of fear of being left alone, not because he is unable to defend himself.

The Piscean does her best to become the ideal love or best friend of a Libra man, but although she adores the company of other people, she always looks for her own space and solitude to recharge.

The man on the scale could not take this desire of the Pisces woman well, as he prefers that they always be together, sharing all the activities.

The challenge facing the Libra man and Pisces woman match is to act with determination to resolve the conflicts that arise in the relationship.

It is because the two signs shy away from confrontation. Both are capable of letting the disagreements and imbalances of the couple pass even though it is not the healthiest attitude.

Keeping silence and not facing problems to solve it, generates greater long-term conflicts. Libra’s indecisive character and the passivity shown by the Pisces woman also threaten the health of the relationship.

For a Pisces-Libra love relationship to work, the two of you will have to work very hard to understand each other. Libra will have to get more in touch with their emotions and Pisces will have to respect Libra’s logical point of view on life.