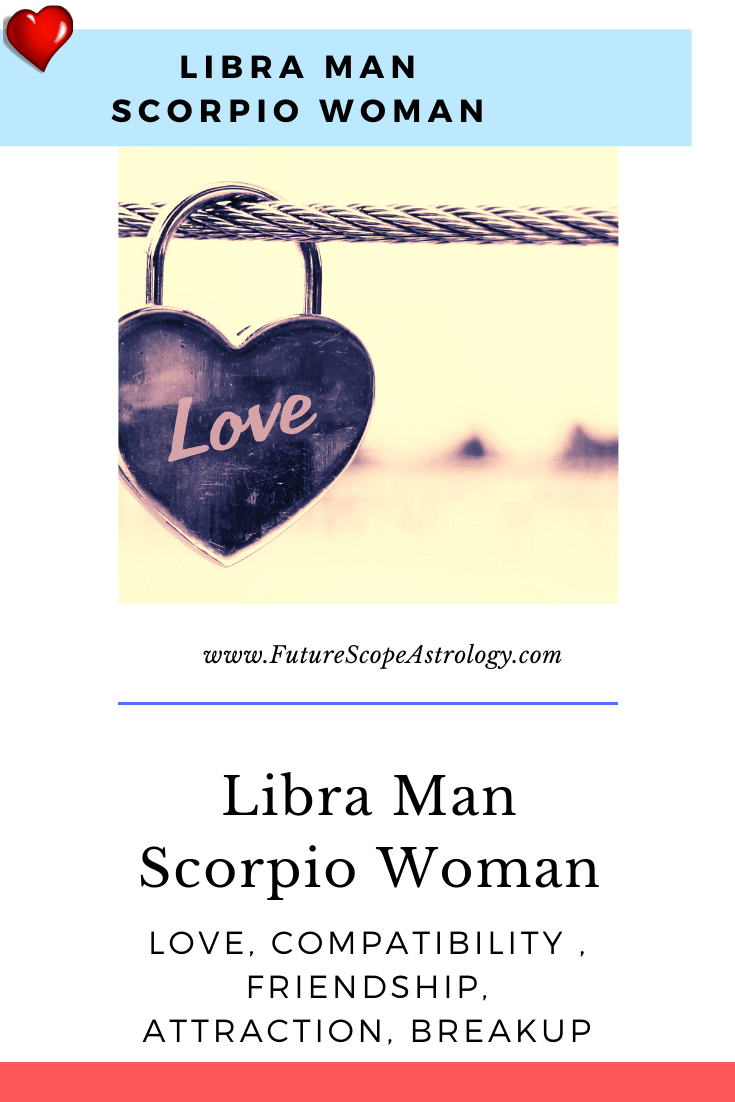 The couple formed by Scorpio and Libra has the great advantage of being a very balanced relationship because the compatibility between these two signs is medium to high.

Libra whose planet is Venus represents love, sensuality and pleasure. On the other hand, Scorpio is ruled by Mars, which represents action, strategy and ingenuity; and for Pluto, power, the underworld.

Libra and Scorpio are compatible signs and have the potential to establish a successful relationship if they know how to take advantage of the traits they have in common and the differences that complement them.

The Libra man yearns for balance in all areas of his life, and has a tremendously developed sense of justice. The Scorpio woman is as intelligent as she is touchy and unpredictable. When it feels threatened, it goes on the attack.

They both share qualities like loyalty and passion. But there are also differences. One of the main ones is the intensity of the Scorpio woman that contrasts with the relaxed temperament of the Libra man.

This difference helps to strengthen the bond between the two because it provides a certain balance to the relationship.

The Libra man and the Scorpio woman are loyal and committed in their relationships. These qualities are a strength in the pairing between the two signs.

Libra and Scorpio have different ways of dealing with a failure in the relationship. When the man on the scale feels despised, he leaves, and when the Scorpion woman feels disrespected and offended, she seeks revenge.

In the union between the Libra man and the Scorpio woman there may be a clash as a result of his need not to be alone and of her self-sufficiency and independence.

These characteristics, however, also bring balance to the relationship, as long as both parties understand and respect the other’s needs.

Intimate relationships is where the Scorpio woman expresses her harmony with the person she loves and desires.

The two signs demonstrate passion and romance in sex and fit together when the Scorpio’s innate intuition understands the desires and intentions of the Libra man’s laid-back temperament.

She tries to unravel what is in the heart of the Libra man, and although it may seem too inquisitive at times, it is an action that can make the intimate relationship between them flow much better.

The Scorpio woman and the Libra man also know how to complement each other when she stimulates in him the desire to know new things, which she does not always do due to her somewhat passive character.

The scorpion can give the man on the scale the impetus to explore the world together and try new things.

Libra is elegant , knows how to be, good manners, style, diplomacy. For a Libra, the fact of looking for a partner becomes a search for perfection characterized by romanticism, beauty, balance.

For them, a relationship is something creative, to which you have to mix the style and face everything together. In contrast for a Scorpio, it is based on a deep and intense physical union .

They take it very seriously and for them it is a comprehensive transformation. His passion knows no limits. It is as if you were to discover the secrets of life and death through sex and your partner.

The Libra man is the perfect team worker and is excellent in dealing with his colleagues and bosses. As a leader he does not stand out because he is usually indecisive and has trouble making decisions.

The Scorpio woman demonstrates self-reliance at work. The obstinacy and perseverance characteristic of the sign make it be used thoroughly to achieve the goals. If she feels that someone has attacked her or feels despised, she will choose to take revenge, which is not exactly good for maintaining peace in a work environment.

The Libra man, on the other hand, behaves more conciliatory, but even if he does not like to confront, he will not remain silent if he is witnessing a great injustice.

The calmness and balance that Libra always seeks can clash with the intensity and irascibility of the Scorpio woman. However, both can form an efficient and unstoppable work team if they manage to combine the initiative and balance of the Libra man with the determination of the Scorpio.

The Libra man and the Scorpio woman can establish one of the most successful unions in the zodiac due to their high compatibility. They will achieve this if the Scorpio understands the needs of the Libra-born man and makes him feel valued, understood and secure in the decisions he makes.

For his part, the man on the scale must always be loyal, committed and understanding with the intensity of the woman born under the sign of Scorpio.

The Scorpio is persistent and stubborn, if she sets a goal she goes after it until she achieves it. Of course, if she feels they are disrespecting her, she will not remain calm, she will take revenge as soon as she has a chance.

The union between a Libra man and a Scorpio woman can go well if both feel mutual support and maintain loyalty. Problems arise when the Libra man perceives that the intensity and complexity of the Scorpio man does not always fit into the calm and balanced environment that he wishes to maintain.

Scorpio is very jealous, because he needs to control his partner, but with Libra he will not have problems, because once he has a partner he will never flirt with anyone else.

When Scorpio is selfish and is not attentive to the needs of Libra, he will make you notice it without any problem and with beautiful words, to collect his fair share.

A Libra would never allow anyone to mess up the idealistic concept they have about love and they will know how to fit Scorpio.

When it comes to dealing with people, Scorpio lacks tact while Libra is all subtlety . Scorpio has a lot of strength, decision-making power, intuition, determination and endurance; On the other hand, Libra even having things clear and knowing where he is going and what he wants, it is difficult for him to decide.

But no problem, because Scorpio will give you that push, which you lack. On the other hand, sometimes Scorpio is at a loss for words and does not know how to express what he feels and in that Libra will help him.

The relationship will work if Scorpio leaves room for Libra to breathe and not feel burdened. Nor should you remind him of everything he is capable of sexually and how far he has come, because Libra needs to feel that at no time has he stopped being elegant and clean.

Scorpio will stay with a Libra, if he is sexually active and allows himself to be carried to the depths of the most intimate. The secret is communication, because one is very frank and open and the other is all secrecy.

They must learn to communicate and trust each other, to form a perfect tandem.