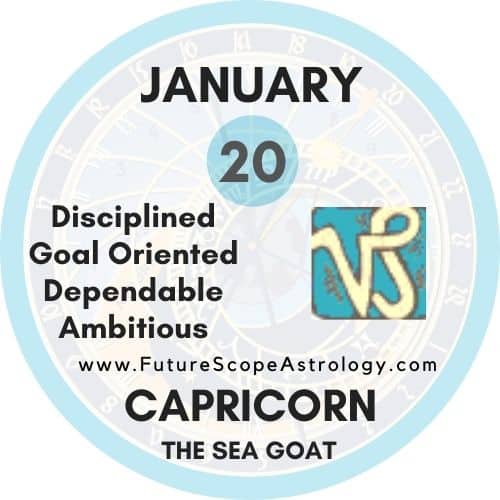 Is your Birthday on January 20 ? Know the Sun Sign, Personality, Compatibility and more….

For People born on January 20, the Zodiac sign is Capricorn. Capricorn is an earth sign. Capricorns are hard working and have good patience. They can be stubborn at times.

Garnet is the birthstone for those born on 20 January.

Garnet, the birthstone for January 20, has been used for centuries in jewelry and other decorative items. While many people know about the gemstone’s beauty, they may not be aware of the other benefits that garnet provides.

On this day, indecisive, calm, dreamy natures are born. They have excellent intuition, the ability to calculate all actions many steps forward helps them to achieve success. These people love noisy companies, fun, they are cheerful and friendly.

They usually have many friends, they are always surrounded by people, they cannot stand loneliness, they are constantly in motion. They are loved for their good-naturedness and cheerfulness, the ability to make fun, help, support. In family life they are usually happy, in the material sphere there will be both ups and downs.

Born 20 January – Strong, active personalities who confidently follow their impulses, wherever they lead. The ability to make extraordinary decisions and translate them into reality is the most characteristic feature of people born on this day.

Improvising rather than zealous, they accept life as it is, changeable and full of surprises. Their internal state is unstable, although they are highly organized at work.

They are natural and laid-back. Many of them miraculously know how to bring order to their work. Out of these seemingly unstable people, you usually get great humorous characters. Even the most terrible circumstances (betrayals, divorces, the impossibility of career growth) are perceived by them through the prism of a smile, which, oddly enough, never seems out of place.

A sense of humor reliably protects their deep inner sensitivity. Although those born on January 20 love jokes and sometimes even fool around completely childishly, this does not spoil them; they are very proud individuals who know how to behave with dignity.

Born 20 January characterized by rare, in our time, responsiveness, attracting relatives and friends to them.

Although they may be nasty and harsh, they are quickly forgiven because there is no anger in these outbursts of rage. Since those born on this day are always objects of jokes, many perceive them superficially.

In fact, they lead a hidden lifestyle and share their hopes and dreams only with loved ones. Most people born on January 20 are sincere and do not play a double game. However, later they may feel a slight decline if they discover that their generosity and generosity were betrayed.

Although those born on January 20 do not differ in physical endurance, emotional and spiritual strength allows them to survive the many cataclysms that usually accompany human life.

Despite the fact that, as a rule, they are on the side of those offended and patronize them, those born on this day may be domineering natures, but this role does not suit them.

They are not particularly adept at forcing other people (except their children) to obey their rules. Since the freedom-loving lifestyle they lead implies a degree of neglect of various restrictions, others do not take their authoritarianism seriously.

Emotional, vibrant and caring, these people can make a big mistake by assuming the role of an arbitrator, but they do it without malicious intent.

People with January 20 Birthday have Capricorn Sun Sign. Click here to check the compatibility of Capricorn with various other Zodiac Signs.

As mentioned earlier, those born on January 20 are not always in excellent physical shape, but their optimistic outlook on life helps to overcome difficulties. However, they should not ignore mild diseases – otherwise the latter can turn into chronic.

Stress relief with alcoholic drinks, smoking should be minimized or eliminated altogether. A diet based on cereals and vegetables should be followed; excess in the diet is unacceptable.

This will help to relax and restore balance. Homeopathy, yoga, spiritual and religious disciplines are recommended.

Advice for People Born on January 20

Plan your actions. Let others express their feelings about something without your premature reaction. Be more patient. Try not to demand so much attention to yourself.