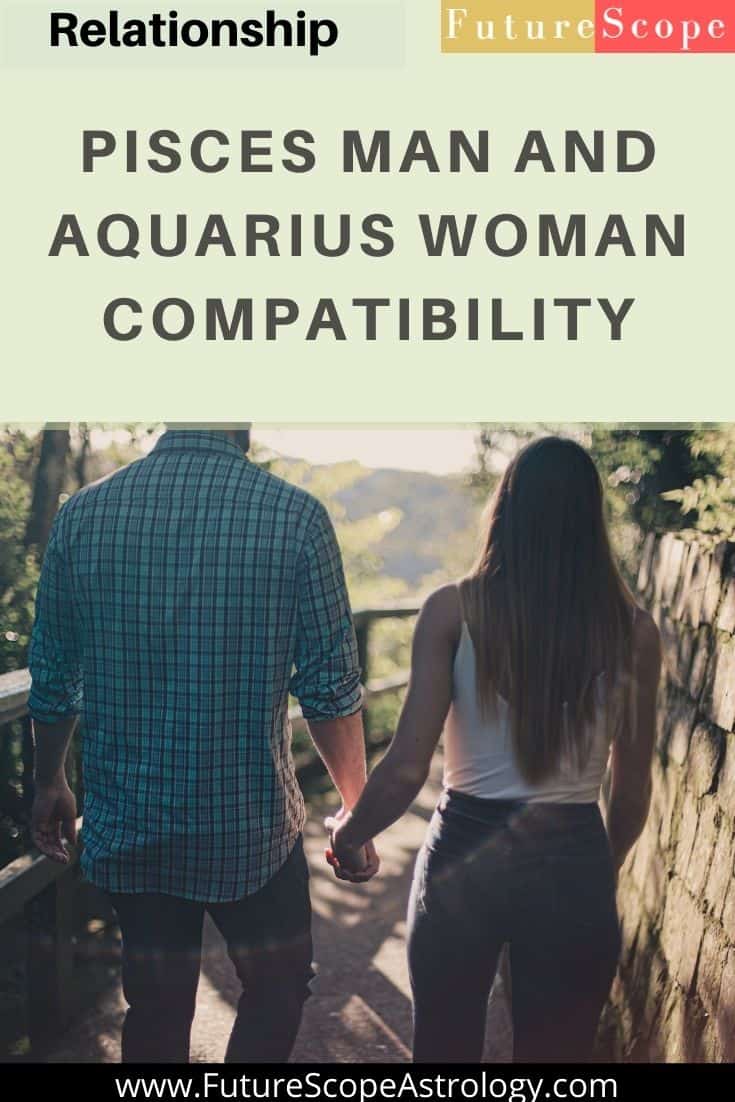 The compatibility between Pisces and Aquarius is not very high

The Pisces man and the Aquarius woman have common traits, but also incompatibilities that make the success of this relationship depend on luck.

In the pairing between these two signs, the focus must be placed on what each one contributes to the relationship, rather than on what they get from it.

The Piscean is the most dreamy man the Aquarian will ever meet. This quality is attractive for the woman of the Aquarius sign, because she wants there to always be novelty and diversity in the relationship.

The Aquarius woman’s desire to help others, independence and pleasure for spending time alone are easily understood by the Piscean.

Where the greatest incompatibility between the two signs occurs is in the emotional connection.

In a relationship, loving or friendly, the Pisces man has high expectations and emotional needs, which the Aquarian will not always be willing to meet.

For the relationship to be sustained, especially if it is to be long-term, the Piscean and Aquarian must know exactly what the other’s expectations are and decide whether they are willing to please them.

In intimate relationships, the Aquarius woman is loving if she truly feels love for her partner. It is difficult for her to match the romanticism and emotionality of the Piscean, but she will be able to satisfy it.

Both signs value sexuality in a relationship, but with differences. For the Aquarius woman it is an activity where she finds fun and a space where she allows herself to be vulnerable.

For the Piscean, sex will always be an opportunity to express sweetness and passion.

If the relationship reaches the intimate stage, it has a chance of being successful as long as both of you are committed and communicate.

From a positive point of view, Pisces is one of the few signs of the Zodiac that understands Aquarius, while Aquarius is attracted to the mystical side of Pisces.

This is important, especially in the beginning of the relationship .

The influence that Venus exerts on Pisces makes the intimate relationship between these two signs very satisfactory, for both of them and both like to experience new sensations.

Although the Pisces man is an introvert, he has no difficulty being around people to whom he will be friendly, managing to connect to make new friends.

Among his qualities is the intuitive empathy that allows him to connect with people who need his help. It’s no wonder that the people you help give back with their friendship and appreciation.

The Pisces man goes out of his way for his loved ones and friends, but is trusting and vulnerable to manipulation.

The Aquarius woman, by contrast, is outgoing and adores the company of other people.

However, she is demanding on friendship and tends to get bored with friends when they stop offering her interesting, novel and exciting moments.

Furthermore, he reserves his heart for few close friends. The Aquarian’s qualities include kindness and compassionate character. But she will not waste time or emotional expense if she is not sure that people will meet her expectations in friendship.

Both signs share the value of loyalty and unconditionality with their loved ones and friends. It is a good sign that the Pisces man and Aquarius woman get intimate.

It means that the Aquarian believes that the relationship has a future.

The Pisces man and the Aquarius woman are not ideal co-workers if they happen to be partners or companions. Despite this, they are not expected to behave in a problematic and dramatic way if they are forced to work together.

Both signs are passionate when it comes to defending their ideas and work projects.

But, the Aquarian is the one who will express herself most vehemently when the facts deviate from the vision she has about how the work should go.

Pisces and Aquarius are good coworkers, they do not like to get into trouble and they do not represent a burden at work.

Pisces is very affected by problems and can find himself blocked. In this sense, both signs can be complementary.

But it is very likely that Pisces will end up needing more support and that Aquarius will feel asphyxiated by so much need.

However, the more time you spend together, the more likely you are to enjoy a long-term relationship. They are the last two signs of the Zodiac and as such, they represent the accumulated experiences of all the signs, which are placed before them.

The incompatibilities between the Piscean and the Aquarian are manifested in their way of experiencing love.

The Pisces man fervently desires and directs all his efforts towards romance to establish an emotional connection with his partner.

The Aquarius woman rejects this excessive warmth of the Piscean, shuns her sticky emotions because she fears losing her independence.

Another problem of the Pisces man and Aquarius woman union is the lack of leadership. The Piscean needs a guide, a hand that makes him put his feet on the ground when his dreams take him very high.

But you will not find him in the Aquarian, who is not interested in guiding or following others, but rather going at his own pace.

The Aquarius woman is pragmatic about life, it is not her desire to waste time in dreams that seem unattainable. If you are unhappy with how the relationship is going, you will either leave or work to change it.

The Piscean needs a partner who at least supports her dreams, even if she is not completely convinced of them. Also, be the one who always brings you back to put your feet on the ground.

The Piscean’s tendency to dream is one of the great incompatibilities in this relationship, especially when applied to the problems that arise between the two, which is not well tolerated by the Aquarian.

The Pisces man’s concept of love does not agree with that of the Aquarius woman. It is an obstacle that could be insurmountable in this pairing.

The union between the Pisces man and the Aquarius woman is challenging, but if it manages to stabilize it brings benefits and satisfactions to both parties.

The more bonding there is between the fish and the bearer, the more likely the relationship is to be established and enduring.

By working hard as a couple, you can work around differences in your emotional needs. The Piscean will have to assert his tolerant nature, and the Aquarian his compassionate character.

It is not easy to be together for the Pisces man and the Aquarius woman, but with effort, communicating and attending to the expectations and needs of both, it is possible that this couple, even with so many differences, achieve happiness.

Pisces is the most flexible sign and your ability to intuit will be essential for this combination to be successful in the long term .

In this sense, you will have to learn to trust Aquarius and not feel rejected when Aquarius performs activities alone or in the company of others.

While Aquarius needs some freedom to feel comfortable in a relationship, Pisces enjoys the presence of her partner so much that it is difficult for her not to consider the Aquarian way of being as a rejection.

However, the more time you spend together, the more likely you are to enjoy a long-term relationship.

They are the last two signs of the Zodiac and as such, they represent the accumulated experiences of all the signs, which are placed before them.