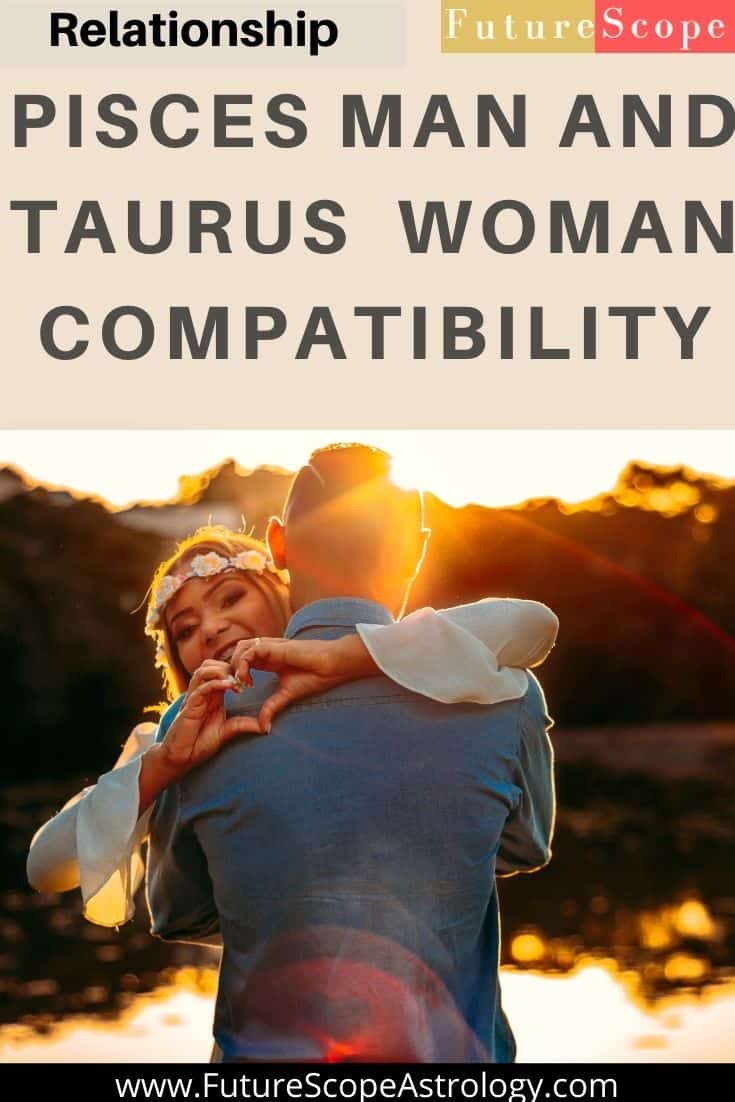 The compatibility between Pisces and Taurus is very good, although especially from the point of view of companionship and social activity .

If a Taurus-Pisces couple decides to separate, they will most likely maintain an excellent friendship that may even make future partners uncomfortable.

The connection between the Pisces man and the Taurus woman is natural, as they are quite compatible signs.

They have in common their peaceful nature, their propensity to avoid conflict, their gift for listening to others, and their talkative character.

Pisces man and Taurus woman are made for each other. It is an ideal match and with a long-term perspective.

The way in which the Pisces man and the Taurus woman build a solid relationship is by enjoying the moments they spend together, without too many demands, just being happy with the tranquility and stability that they give each other.

The problem in this pairing may arise from your different long-term expectations. The Taurus woman wants stability and this is what she demands from her partner.

The Piscean, for his part, has a freer thought and it is difficult for him to focus.

On a intimate level , their relationship could be very interesting , as Pisces spirituality meets the rational and sensual Taurus. Taurus will also feel comfortable with the sensitivity and candor of Pisces.

The two of you will complement each other wonderfully and your relationship will be like wine, improving over time.

The woman born in Taurus is characterized by having a big heart. Hence her connection with the Pisces man naturally arises, who also in a being with a big heart.

The Piscean is attracted to the tranquility and emotional stability that the Taurus woman transmits.

She is the rock he needs to stay in reality. These are the traits that are attractive to each other when they meet and that can hold them together in the long run.

The Pisces man and the Taurus woman live their friendship without ties, but with a genuine desire for the other to be happy. They will be loyal and will deliver without regard.

The friendship between the two is usually long-lasting and without conflict. Just as the connection between them arises naturally, the relationship also develops and strengthens.

Calmly, but steadily, with no apparent effort from both of them to go too far.

If the two of you are aware of these differences that keep you from working together effectively, you can work to overcome them.

There are some important differences that can cause relationship difficulties.

Taurus believes in leading a simple life, with few interests, a simple approach and a practical sense, while Pisces , on the other hand, lives in an imaginary world and their likes and dislikes are very imprecise.

Unlike Taurus, he does not have clear preferences. Pisces is less balanced and tends to be emotional and instinctive.

Pisces tries to delve into things (to get to the heart of the mystery of life and nature), while Taurus is generally content with the routine of their existence.

If the bull woman does not find the stability she wants from the Pisces, she will be angry, but not for long, because she will not want to give up all the positive that she gets from her relationship with the Pisces man.

The Pisces man longs for a partner who will join his dreams, but the Taurus woman will not accept to separate from reality.

Therefore, the Piscean must strive to be in reality to give the Taurus woman the stability that she so desires. Pisces is capable of doing this, first because they want to please their partner, and second because they have a tremendous facility for adaptation.

The union between the Pisces man and the Taurus woman is a safe bet. The personalities of both signs augur a happy and lasting relationship.

The two strengthen and complement each other to successfully overcome any obstacle that comes their way. The Taurus woman will lift the Pisces man when he feels sunk or totally lost in his dream world.

And the Pisces man will help the bull woman when she feels angry with life when things are not going well. He will make her relive the joys of life with his charm and kindness.