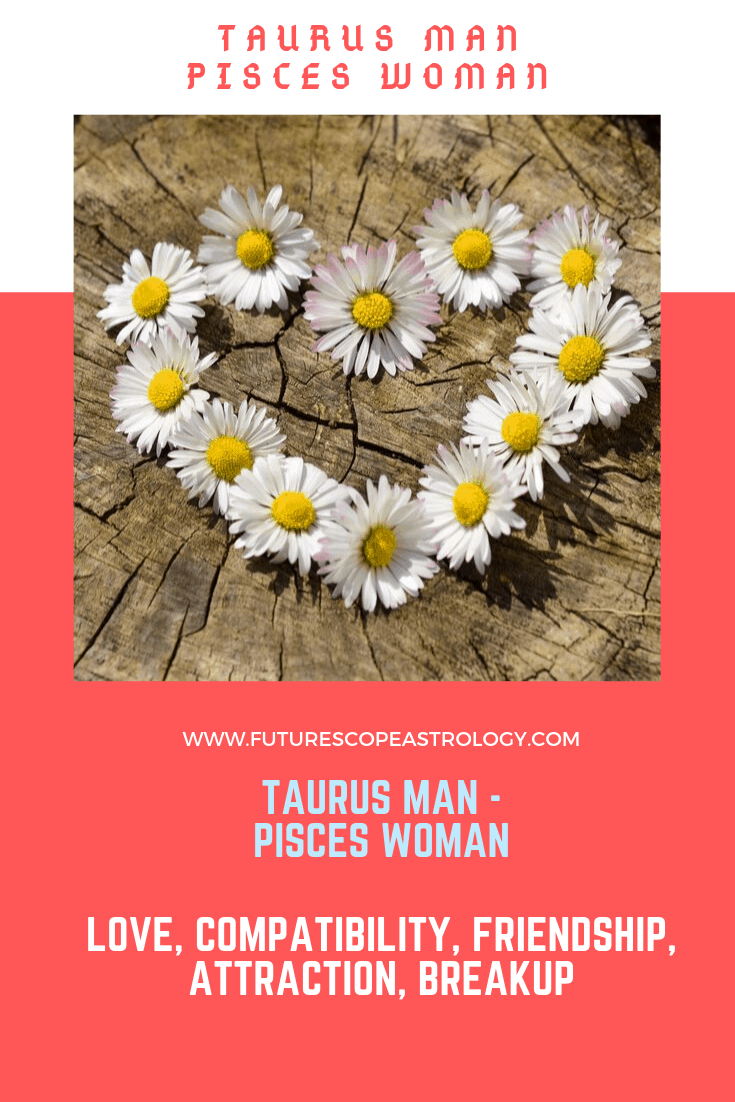 The compatibility between Pisces and Taurus is very good, although especially from the point of view of companionship and social activity .

If a Taurus-Pisces couple decides to separate, they will most likely be able to maintain an excellent friendship that may even make future partners uncomfortable.

This may not be one of the most common pairs, but they are quite compatible. It would be very strange if when a Taurus man unites with a Pisces lady, the sparks do not fly around.

They fit together almost like the pieces of a puzzle, exalting and appeasing each other’s characteristics in very delicate ways, without attempting to change their personalities.

Pisces is a free spirit, who floats and dreams for long periods of time and nothing better than the land of bullfighting to make it come back to reality.

Landing the Pisces projects is part of the work that Taurus has as a couple, while the Piscean woman has the ability to exalt the hidden sensitivity of the bull man.

Although on the outside he looks like a beast, Pisces knows that on the inside, Taurus is soft and sensitive, capable of having deep feelings for everyone around him.

She can see in him a series of moral values ​​that no one else can and with just a small impulse, make her man bring them out, without him feeling that they are trying to change his being, without pressure of any kind.

Both in friendship and in relationships, this is an interesting union, because it manages to get the best out of each component of the equation and provide happiness.

Pisces is patient, kind and cautious, and expects the same from whoever is next to her; the bull, impetuous by nature, tenderly heeds the call for calm, which seems incredible.

Conquering a bull is a slow process and Pisces ladies have enough patience for this task. Neither of them rush, they measure their actions well, they analyze each other, they become close and little by little, they end up madly in love.

Usually the initial attraction between them is strong, but they know that sustaining a long-term relationship takes much more.

It is an uncertain couple to a large extent, because it not only depends on astrological trends but on the personal work of conquest of each one, in addition to the flexibility and adaptability they have and the interest in improving, leaving aside the negative aspects of his personality in search of the common good.

She manages to trust him almost immediately, but they are both introverted and somewhat shy, so they prefer solitude and silence, which makes the process of knowing and recognizing each other difficult.

After this stage, they will find a way to communicate effectively and will begin to know each other in depth.

Regarding sex, it may take a little while to get to this point. To get into this situation, he will have to find the space to reveal his emotional and sensitive side.

She only relates to those who offer her the possibility of feeling protected, safe and confident. If they get into this situation, it is almost a fact that the relationship will last for a long time.

In intimacy , their relationship could be very interesting , as Pisces spirituality meets the rational and sensual Taurus. Taurus will also feel comfortable with the sensitivity and candor of Pisces.

The two of you will complement each other wonderfully and your relationship will be like wine, improving over time.

Stability is not achieved from one day to the next, in reality, for both it is a slow process in which they will be experiencing new sensations until they determine that they are exactly where they wanted to be.

It is because of this quality of both, that with other signs they tend not to have much in common at first, because they go at different speeds.

Throughout this process, spontaneity and joviality will be common. Unplanned outings, surprises, unexpected games, flirting and courtship loaded with strong sexual tension is a constant at the beginning of the relationship.

Best of all, this manages to spread over the years, although evolving a bit.

The differences between them are fundamental for the personal growth of both, something that is repeated within the relationships of a couple, friends or family that have the same astrological configuration.

Friendships between them, when they arise within the work environment, are usually indestructible over the years.

This is not to say that all the problems between them will arise due to the fact that he likes to emphasize the strength of his nature.

The reason for some of them may be iher slowness and elusiveness, her mystery and lack of self-confidence, which is often accompanied by floods of tears.

What really can annoy a Taurus man is the attitude of the Pisces woman to the truth. The truth for her always depends on how she feels at the moment.

The truth for Pisces is not static, it is constantly changing depending on many interpretations. People, a situation or other point of view make it more blurry or, on the contrary, concentrate it.

The bull considers the truth as a fact – eternal and unchanging. This is the polarity of their opinions. Which of them is right? In fact, each of them may be right – it all depends on what kind of truth they mean. There are eternal and immutable truths.

There are those who are in a state of constant change, because they relate to the field of human feelings and emotions or depend on public opinion. But if there is love between a woman and a man, this is their only truth.

However, there are some important differences that can cause relationship difficulties.

Taurus believes in living a simple life, with few interests, a simple approach and a practical sense, while Pisces , on the other hand, lives in an imaginary world and their likes and dislikes are very imprecise.

Unlike Taurus, he does not have clear preferences. Pisces is less balanced and tends to be emotional and instinctive.

Pisces tries to delve into things (to get to the heart of the mystery of life and nature), while

Taurus is generally content with the routine of their existence.

Pisces women are obedient workers, who know how to follow the lines of command. Working with Taurus they will be able to coordinate actions and work in efficient ways.

Neither of them look for shortcuts or are lazy, therefore they become excellent co-workers, the kind that coincide by arriving first or leaving in the last hour.

Taurus, having such a cooperative woman on your team, will manage to get rid of all minor activities and focus on managing the big picture.

The Pisces woman is essential to provide structure and order to the work of Taurus, becoming very easily her right hand, in something more than an assistant.

A quality of Pisces is that he can take work that does not correspond to him if he believes that the person is not qualified to perform the task correctly.

This can be negative, as some people can detect it and overload you with work. It is the duty of Taurus to detect these malicious actions and exercise their leadership functions to balance the situation.

The relationship between the Taurus man and the Pisces Woman will be truly beautiful and generous, because this is the union of Earth and Water.

These two, especially if the connection between their Sun and the Moon is strong and harmonious, can exist in their created world, feeling the same thing.

Their relationship does not differ in the explosive passion inherent in other pairs of solar signs, but they have rare tenderness and warmth.

Their relationship is always surrounded by an aura of mystery, and it pleases them: they probably feel that this does not allow their delight to fade.